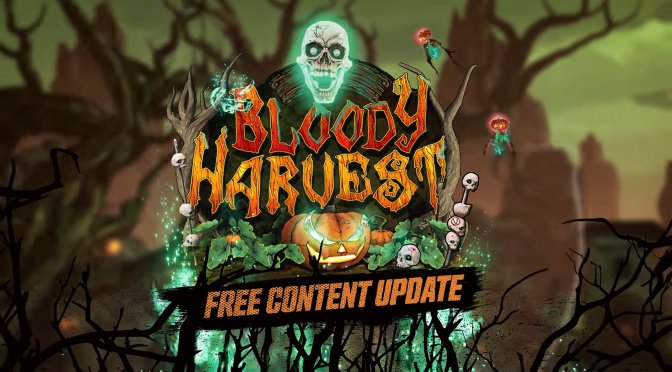 Gearbox Software has announced another Bloody Harvest event in order to celebrate the upcoming holiday. Bloody Harvest is a free limited-time event with a Halloween inspired spooky theme.

This is a completely optional event, which can be initiated by talking to Maurice. The event offers unique challenges, and most importantly unique loot.

Maurice is a Saurian, similar to those found on Eden-6. He can be found on the top deck of Sanctuary III, right next to the Mayhem Mode console. Speak to him, and he will give you the Bloody Harvest “Descent into Heck” event quest.

Your objective is to find haunted enemies, destroy the ghost who is possessing them, and collect the Hecktoplasm. Once you have enough you can return it to Maurice. He will need it in order to open a portal to Heck. Which is the place where Captain Haunt resides.

This is your final objective, find him, and erase him forever. Well, that is until he re-spawns, because this mission is repeatable, and you can complete it as many times as you want.

You will only need the base game in order to participate in the event. However, ghostly foes can also be found in DLC locations, such as The Handsome Jackpot, Xylourgos, Gehenna, and Krieg’s Mind. The Bloody Harvest event will last until November 5th. Have fun!

Below you can watch this year’s Bloody Harvest event trailer.