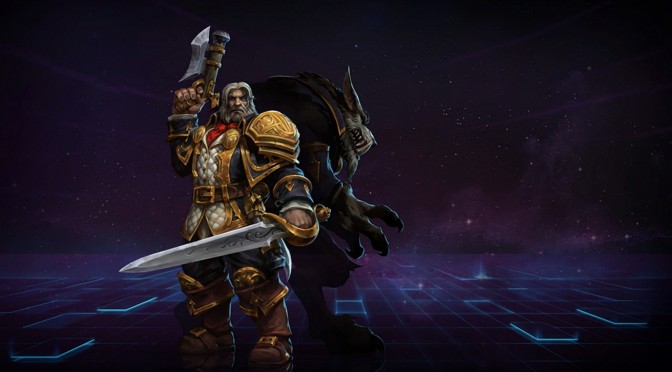 Greymane has been released on Heroes of the Storm. That means we’re all going to gain our own opinions of the new hero. I’ve seen mixed reviews on how this new hero plays out and if he’s even good enough to be played. So, here is an overview.

Gilnean Cocktail (Q) – This skill is pretty unique and incredibly useful for his kit. The flask needs to hit an initial target to cause the higher damage cone behind it. While you can talent into making the flask explode, you still need to position in such a way to maximize the AOE cone. This is because the cooldown takes a lot of time and the mana cost is high.

Inner Beast (W) – This ability is the same in both Human and Worgen form. It is refreshed by auto attacks and can effectively stay up indefinitely. Be sure to keep the cool down ready for team fights or objectives. Since the function is the same in both forms I will only cover it once here.

Darkflight (E) – While in human form it allows you to lunge at your target and shapeshift into your Worgen form, dealing damage on impact. This can be used on enemy minions or walls as a means for
escape or gap closing. This ability is incredibly versatile in that you have some of the best in and out of fights mobility there is.

Razor Swipe (Q) – This is a basic melee attack. It’s for when you’re in Worgen form, and allows you to move forward while swiping and dealing damage in a frontal arc. It does a fair amount of damage and is on a low cooldown, so use this after the fight has worn on and you have a decent shot at going in melee and taking out some high damage threats. I typically use this after chasing I have weakened my enemies with ranged attacks in order to deliver the final blow.

Disengage (E) – While in Worgen form it causes you to roll in the direction of the cursor. No target needed to have this one go off. It is a fairly long roll away.

Go for the Throat (Heroic) – This ability allows Greymane to leap at a target enemy and transform into a Worgen. He then slashes 3 times on landing, dealing high damage to a single target. If this kills the target then you can cast the spell again for free once more. I know what you’re asking yourself. Can I use this for free again if it kills someone else? Yes, you can if you upgrade it at level 20. And yes, it is as nasty when fighting squishy targets as you’d imagine.

Marked for the Kill (Heroic) – This is the heroic I normally take. Marked for the Kill allows Greymane to transform into the opposite form (Human to Worgen or Worgen to Human) by toggling the ability after it has hit its target. This ability also makes the target take 25% more damage from all everyone. In short, this makes it very useful in many situations, especially against “tanky” heroes. This heroic also makes it easier to destroy squishy targets as it’s almost impossible to get away since you’ll just come flying back at them if they try to run.

While in lane, be very careful of ganks from The Butcher, Kael’Thas, Jaina, Kerrigan, or Thrall since these characters have lots of ways to hold you in place and just mercilessly beat the crap out of you. The laning with Greymane is not the best as he is probably best suited to gank a lane with CC to hold someone down as he uses his (from Human) skills such has Q, W, E, Q, Q, Q, etc. Even though he’s susceptible to being burst down quickly, he can be quite devastating in ganks (as long as you have positioned him properly).

As with most assassin type characters, CC is your worst enemy and it’s no different in this case. Stuns, snares, and slows will completely wreck your ability to be effective. This is why being ranged for the majority of a fight is important. Understanding when to go in is very important. Using your Marked for the Kill effectively for your team will help you win a fight.

Using Marked for the Kill you can mark a front tank to take excessively more damage or mark a healer that is in the back of the team to take them out quickly if possible. This will help your team to quickly end a fight, whether it be the tank or healer. Provided you can avoid the mass amounts of AOE and CC either way the Heroic ability’s range is quite good so being far enough away shouldn’t be an issue.

All in all Greymane is honestly nothing too special and is kind of a mixed bag right now. There is an overwhelming amount of people who hate him because they feel he is useless, probably because he’s fairly new and fits into very niche environments. He needs a CC heavy team to slow and snare his opponents in order to keep him alive. Greymane might possibly be far better as a ranged hero than as a melee one, even thought the melee does more damage, but that again depends on the opponents’ team makeup.

During my time playing him I have found that buffing the flasks is actually one of the most beneficial things you can do. With two flasks you can gain enough range and cause massive amounts of damage. Even one flask will suffice if it’s a prolonged fight. Seeing as how you can (with Inner Beast active) do an AOE cone of around 900 damage, it can seriously injure some squishies and even tanks.

Overall I think Greymane is a balanced hero with maybe a few too many weaknesses. He is only powerful against Lunara (no real surprise there), but fairly even on most others if played correctly. Blizzard has done a decent job of keeping this game balanced even with the addition of new maps and heroes. I’m honestly very surprised that it has done so well.

So, in closing, I’m happy with the addition of this hero. Blizzard obviously tried to change things up. I’m also excited to see emerging pros pick him up and show us what they can do. I’m interested to hear your thoughts on the new hero. Post a comment and let’s hear your builds. I’ll add mine at a later time. Thanks and have a great day!