ASROCK has recently made a bold statement regarding overclocking on their 400 series of Motherboards. According to the company, users can now easily overclock non-K CPUs on any non-Z compatible motherboard, mostly the B460/H470 chipsets.

In case you weren’t aware OC is disabled on non-K ‘locked” INTEL processors, and although there are few tricks/tweaks, and BIOS editing which can be done to unlock and bypass this feature, it comes with a huge risk factor.

ASROCK will support base frequency overclocking on non-Z490 motherboards, as told by the manufacturer.  ASRock calls this feature as Base Frequency Boost (BFB) technology which allows gamers to overclock the base clock on locked Intel 10th Generation Comet Lake processors, even with the non-Z series of motherboards.

INTEL has not mentioned anything regarding this issue, and the company might even ban and shut down this feature in the future though. They have done this in the past as well, as evident from Wccftech’s article. ASRock’s solution looks like a proprietary workaround.  Technically, it’s possible that Intel could eventually disable this ASRock feature with a firmware update. Other Motherboard vendors have not yet announced or claimed such a feature on their 400 series mobo lineup.

How ASRock’s BFB technology might actually work is a mystery at least for the time being.  But from what I can gather from this leaked PowerPoint slide, is that the motherboard vendor is actually increasing the processor’s PL1 (power level 1) from the default value to the maximum value, and locking it at that higher value.

In ASRock’s example, the 65W Comet Lake CPU operates as if it was a 125W model. Intel has not confirmed overclockability for non-K processors in the official slides. For what it’s worth, AMD allows CPU overclocking on B450 motherboards, and it applies to all Ryzen 3000 series processors.

Videocardz published a picture of one MAXSUN B460 motherboard a few days ago, which had some unique buttons on the rear I/O section, mostly for overclocking.

A higher TDP limit gives more breathing room, and also allows a non-K Comet Lake processor to run at a higher base frequency. Of course, all this comes with a higher power consumption and more heat, so the CPU cooler will decide the highest base clock value.

According to the slide, ASRock’s BFB will not produce the same level of uplift performance on all Comet Lake processors.

The increase in base clock speeds will vary from 800 MHz to 1,100 MHz, depending on the model/SKU of the processor. ASRock has not given any information as to whether BFB is an automatic algorithm that decides on the optimal frequency, or if the user would have some type of control over it.

If true, this might allow the entry-level Intel i3-10100 processor to match the Ryzen 3 3100 CPU performance, through BFB overclocking.

BFB works by increasing the TDP of locked processors to the maximum PL1 value. For a 65W processor like the i3-10100, this would mean an increase of 125W. According to this slide, BFB can also overclock some processors like the i7-10700 by as much as 900 MHz. 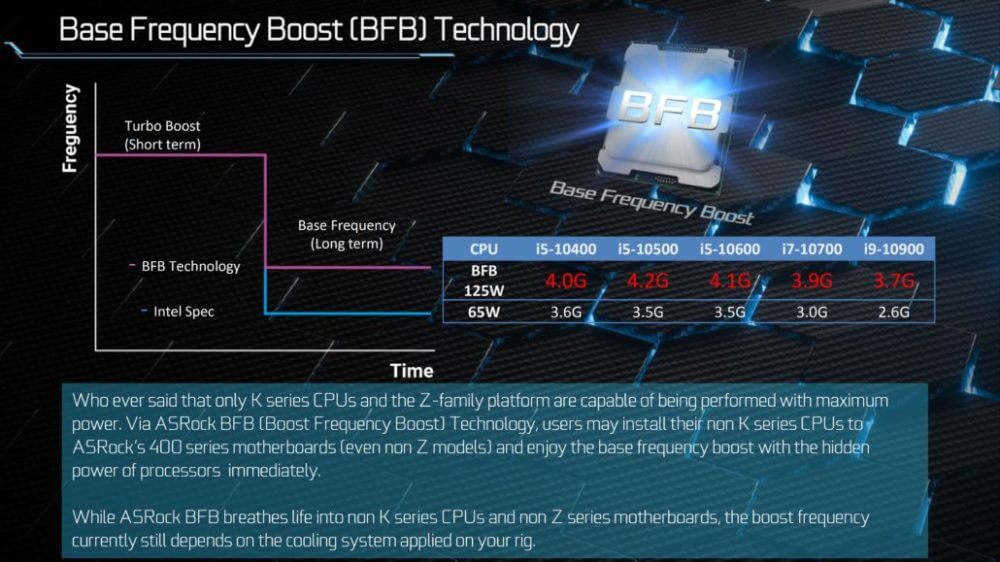