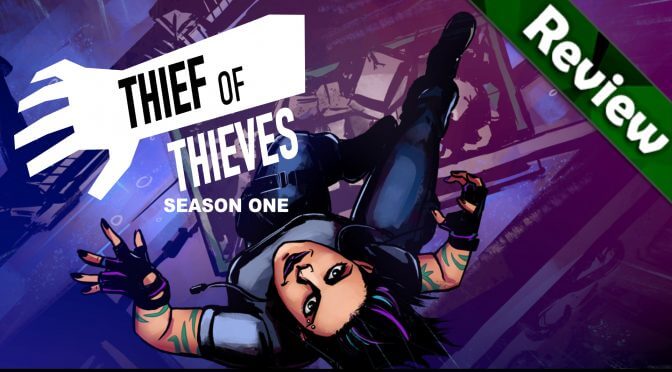 I’m a big fan of stealth games. There is something about the challenge of trying to accomplish an objective without being detected, whether it’s to steal something or to assassinate a target.

When I initially watched the announcement trailer for Thief of Thieves I was pretty excited. A narrative take on a stealth game based on a comic book where you take on a number of heists. That sounds like a great idea. What could possibly go wrong?
Well I’m sure if you’ve ever watched a heist movie you know that  a lot can go wrong. Unfortunately everything that does go wrong in Thief of Thieves is not part of the heist, they’re issues with the game itself.

The game starts off positively enough. The art style for the cut scenes is great, the voice acting is pretty decent and the way the story is told through comic book panels works very well. I suppose that should come as no surprise since the game is based off a comic book series after all.

You even get a few dialogue choices in these sequences which was a nice touch, however these seem mostly like a cosmetic choice since they really only affect the voice lines you get to hear , they don’t really have any effect on how the missions play out. (At least in the first 2 volumes they don’t).

Thief of Thieves Season One consists of four chapters or volumes as the game calls them. The review version only had the first two available, with the others marked as “Coming in July”.  This has me somewhat concerned,  perhaps it should have more aptly been named Season Half.

This wouldn’t be so much of an issue if what was available had any substance and actually felt polished. The problem is that it doesn’t.

Volumes 1 has two parts. They’re both the same stage.
In the first mission you have to sneak into the mansion. You can pick up one of two disguises and sneak inside. Then you have to eavesdrop your mark to get info – twice. There are some secondary objectives like hacking a computer, but its pretty barebones. Once you’re done you leave.

The second part takes place at night during a party. It’s the same mansion, but now it has guests. So instead of getting a disguise to sneak in you need to piggy back off a guest. Once you’re inside you need to pick the marks pocket to get the key to steal the motorcycle.

The second volume is the same kind of thing, but instead of being a mansion you need to case out a train station, and an office section connected to it.

For the first mission, you go in during the day, mark out a bunch of cameras, pick a guards pocket for a key and try to gain access to the office.  For the second mission you go back at night to sneak in and steal what you need from the safe.

They do introduce you to other team members in volume 2, where you can choose a partner for the 2nd mission who has different abilities, but it never really fleshes this out. They introduce it in mission 1, but your teammate just knocks over bins as a distraction.

Volume 2 concludes with some kind of very awkward/annoying chase sequence where it has you trying to escape from an assassin through a maze of containers while trying to pick locks, and then the game ends to which you are greeted with “Come back in July for the next volume. ”

The camera setup in this game is possibly the worst camera choice they could’ve used. Imagine playing a stealth game with some set camera positions like Resident evil 1 and 2 or a panning side camera where you have no control over the camera angle. There is no way you can get accurate information on the guard locations and movement that you need (which is crucial in a stealth game), instead they show up as blips on the edge of your screen. If it’s white there is a guard there, if it’s red….well you’ve been seen.

On the second  mission of the second volume there are cameras that you have to avoid. The problem is that even if you’re near the edge of the cone  of the camera (not in it), it will snap to your location and the guards will be alerted, once that happens you need to restart the level.

Unreliable mechanics like this don’t make for a good or enjoyable stealth experience.

There were also a few instances where the UI prompts were incorrect, and sometimes the overlay showed  keyboard shortcuts when using a gamepad, which forced me to press the gamepad button and then press it again for it to register.

The AI got stuck on objects and just walked in place on a few occasions, and I had once instance where I got an achievement, and the overlay just stayed on screen until I restarted the game.

The shadow setting was the biggest culprit here. Anything higher than low would have a massive impact on my fps. Where I was getting 42fps with max shadows I would get 90 with low. There was very little performance difference between medium and max.

This leads me back to my point about being concerned at the exclusion of volumes 3 and 4.  If they were better, in that they showcased deeper gameplay, better stealth and a more a fleshed out use of teamwork mechanics they would obviously have included them, because it makes no sense that the developers would choose to put the worst part of the game out as a review version.

Their exclusion suggests to me that they are probably unfinished or more unpolished than what was on show. And what was on show has left an incredibly poor impression on me.

Good voiceovers and cutscenes are not enough. The gameplay needs to be solid as well,  and it’s not. There are just too many issues with Thief of Thieves as a package for me to recommend.

It’s possible that some improvements will come with the later volumes, and perhaps even the performance issues will get ironed out, but as it stands at the moment this is one heist you should definitely avoid.

Playtime: 4.5 hours total. Stephen completed the the available content in about 3.5hours, and replayed the first half twice testing different outcomes.