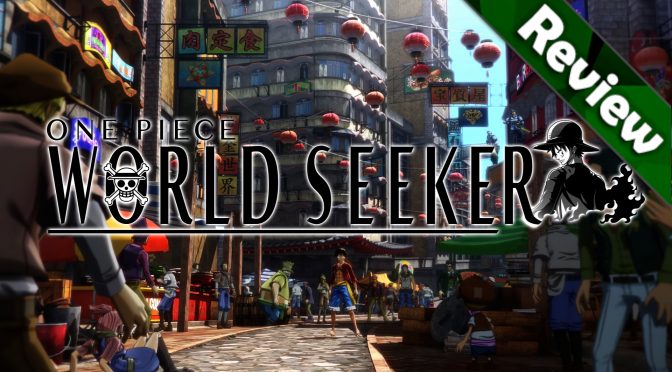 When I first heard of One Piece: World Seeker, I remember thinking it was about time they brought one of Shonen Jump’s most widely-beloved exports to gaming. Unbeknownst to me, the now eight hundred and seventy-three episode anime has actually ventured into our industry numerous times over the last nineteen years. Some quick research revealed that One Piece has inspired several beat ‘em ups, fighting games, turn-based JRPG’s, action-adventure games, and even a baseball game.

Now the series has finally sailed into the treacherous waters of the open world, sandbox genre. Veteran One Piece developers, Ganbarion, have yet again given players the chance to don the straw hat of protagonist Monkey D. Luffy, but this time with unparalleled freedom to explore, to find collectables, and pummel hoards of marines with his iconic, elastic fisticuffs. Thanks to the power of modern platforms, and not least of all the might of the Unreal Engine 4, gamers have the chance to immerse themselves into Luffy’s adventures like never before.

So close, and yet so far. While there are merits to the idea of building a One Piece game out of a sandbox formula, I don’t think One Piece: World Seeker represents that game. The combat mechanics were relatively enjoyable, and it is obvious that the developers have put some serious elbow grease into the game’s visual representation. Nevertheless, the repetitive nature of side quests, and the underwhelming attempt at world building, simply did not take advantage of the rich and varied source material that is its namesake. This is simply not the One Piece game it should have been.

For the unfamiliar, One Piece is a long-running manga and anime series based around the escapades of Monkey D. Luffy and his pirate crew on their quest to obtain the eponymous ‘One Piece’ treasure. Whoever holds this legendary booty will be proclaimed as king of all the pirates, so the series is sort of like Pirates of the Caribbean. Except, of course, that it is stretched to an encyclopedic length with the distinctive quirkiness and fanfare that only an anime can pull off.

Yet, Luffy’s whimsical straw hat and flip flops belie his true abilities because he accidentally ate the ‘Gum Gum’ devil fruit as a boy. The fruit made him stronger, highly resistant to enemy attacks, and enables him to stretch his body into extraordinary shapes much like Mrs Incredible or Mister Fantastic. With the power of his rubbery physique, Luffy sets sail on an epic treasure hunt across endless seas where he encounters new friends, gains new crew mates, and confronts formidable enemies.

Eight hundred plus episodes later, and we have One Piece: World Seeker opening with our man being detained in a sky prison floating above a union of islands named ‘Prison Island.’ It seems Luffy allowed himself to be incarcerated as a distraction while the rest of Straw Hats crew  break into a vault somewhere below. Unfortunately, the plan turned out to be a trap, resulting in Luffy escaping the flying fortress to elude the clutches of Isaac, the tyrannical warden of the entire region.

Once our hero crash lands on Prison Island, he befriends a new character called Jeanne. They get to talking, and she eventually explains that the island’s populace has been split between Pro- and Anti-Navy factions in the aftermath of a protracted war. The Pro-Navy inhabitants live a life of comfort afforded by Isaac and the Navy as their new governors, while their counterparts struggle under their draconian regime.

Never one to turn a blind eye towards the troubles of the little people, our hero agrees to help Jeanne and the Anti-Navy resistance to rebel against their oppressors. As such, the player will take part in various missions mainly built around reuniting Luffy with his crew, getting to know the colourful inhabitants of Prison Island, and steadily crippling Warden Isaac’s (literal) iron fists over the islands. Of course, you also get to beat up lots and lots of bad guys and bosses.

Missing the treasure in plain sight

One Piece: World Seeker’s setting is one of the most obvious links to its anime and manga roots. The narrative brings out the tried and trusted theme of Luffy stumbling upon a new island with a dilemma, and then going on a spontaneous adventure to assist the inhabitants with their struggles. It is the old, ‘good taking a stand against evil’ trope that has sustained the One Piece universe since its origins.

Moreover, fans should be pleased with how the writers have included characters and some cameos into the game from the One Piece chronology. Everything from their dialogue, to the depiction of the main villain feels like an authentic production from the central story line of One Piece. Considering that the creator of the series, Eiichiro Oda, was involved, it is no wonder the game like an actual episode of the anime during its best moments.

Unfortunately, I began to notice how the gameplay of World Seeker ends up linking to the story in a rather shoehorned manner. After the tantalising opening cinematic of the narrative, most players would naturally assume that Luffy will become the centre of a complex operation to overthrow Isaac. Instead, most missions quickly fall into the same loop where he must travel to a certain location, and just beat the crap of everyone he finds there.

Generally it boils down to you are at A, bad man at B. Go from A to B and remove bad man’s front teeth. World Seeker does try to mix things up with a few sections where you must infiltrate strongholds without being detected. As is usually the case with sandbox games that include ham-fisted stealth sections, they just feel like tacked on filler meant to pad out your play time. Ultimately, the gameplay soon deteriorates from fun, to repetitive, to monotonous.

Luffy has a basic, three-hit combo that he can unleash upon thugs and navy soldiers, as well as his famous Gum Gum pistol serving as a ranged attack. There is also the option to sneak up on enemies either from behind or inside a barrel Metal Gear Solid style, which then creates the opportunity to perform stealth takedowns. It was rarely necessary to be stealthy though, since the bad guys are not only easy to kill, but sneaking around as Luffy just feels like a disservice to his character.

I must admit that the combat is very well animated, and fighting does a superb job at making you feel powerful. The camera also has the delightful habit of shifting to slow motion when you deliver the KO blow to the last man standing (much like Batman and the Arkham games). Seeing the poor sod being launched slowly off a high building after receiving Luffy’s catapult fists was very entertaining… for the first fifty times I pulled it off at least. 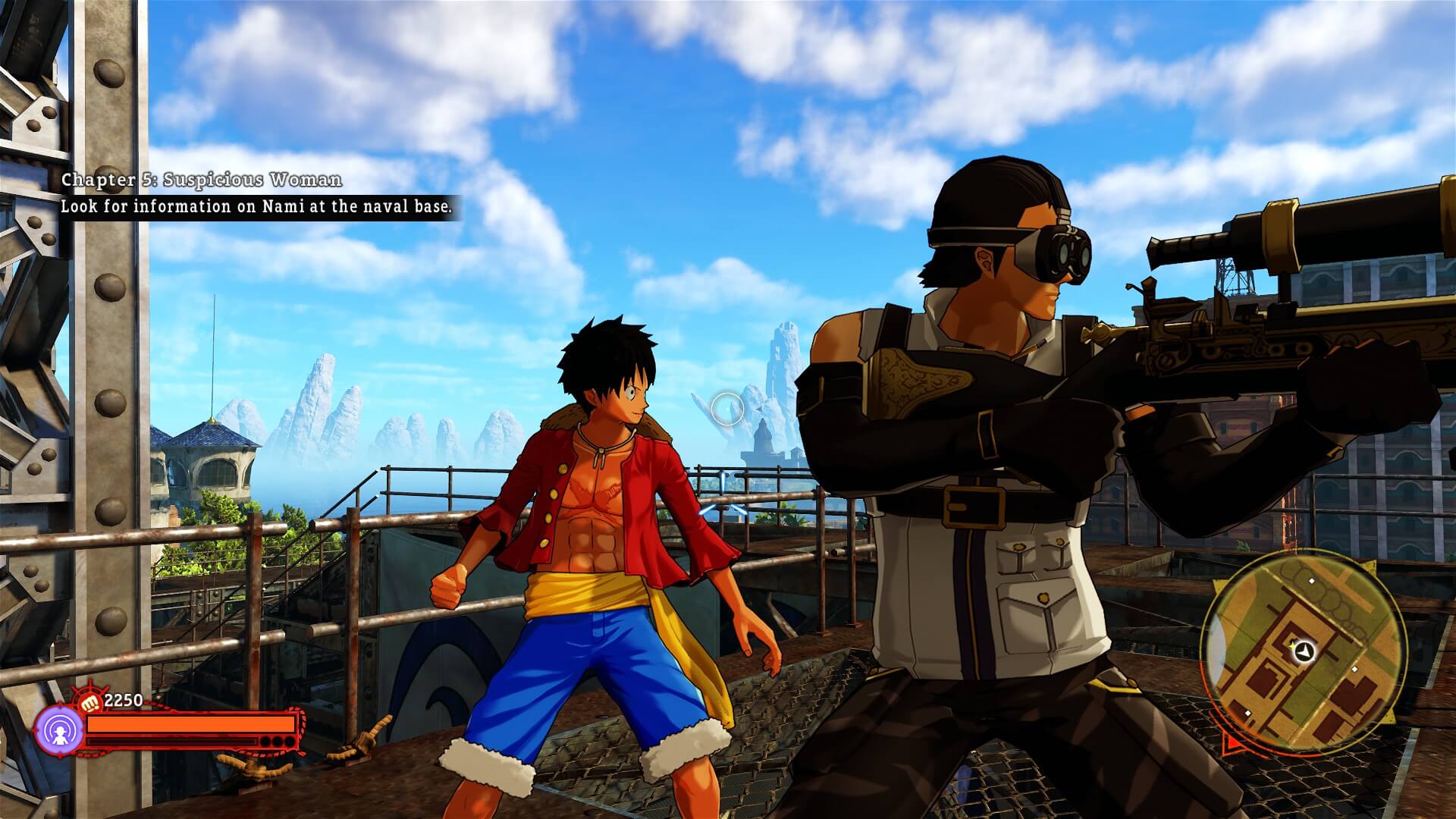 Adding some variety is also the ability to switch between the blue and red ‘stances’ of combat on the fly. The red mode is essentially reserved for Luffy’s heavier, more focused attacks, and complimented by the ability to guard. Blue mode is faster and deals less damage, but the broad sweep of the attacks makes it appealing for confronting whole groups at a time. The dodge mechanic is also useful in this stance since you just zip out of the enemy’s reach if you need to.

While One Piece: World Seeker’s traversal fails to achieve the fluidity of recent super hero games, I thought that the mechanics of swinging and propelling my way through the game’s surprisingly big open world was implemented nicely. Like the combat, you really feel the forces at work in Luffy’s special abilities, and it became a particularly exciting system once I landed amidst some high trees or buildings.  I even managed to gain a bit of fun out of collecting the overabundance of pointless loot scattered throughout the world.

To my dismay, the majority of the side quests have actually been built around this very idea of collecting meaningless loot items for the citizens of Prison Island. I was horrified to find myself looking for small flowers at the request of a random man standing near a wooden shed, or finding pieces of copper for a nameless little kid. Why must I do favours for bland-faced NPC’s who the game does not even bother to introduce to me? This sort of meaningless filler has no place in a One Piece game; I’d rather go looking for Riddler trophies.

At least the game is generous in dishing out experience points from these meaningless exploits. You can use said points to purchase new blue or red fighting moves, or you can spend them on Luffy’s traversal abilities and health points.

However, let us not forget that One Piece has had an entire manga and anime saga to build up Luffy’s repertoire of moves. Does it really make sense hiding them behind experience points which can only be gained by grinding away at meaningless loot quests? No, it doesn’t.

It feels Unreal how much I love this game engine

Sorry about that atrocious pun, but sweet mother of monkey milk this game is pretty. I am not sure why so many studios from the Land of the Rising Sun have embraced the Unreal Engine 4 as their engine of choice lately, but World Seeker is yet another example of what a bountiful move this was. Just like the anime, this game is so colourful and vivid, that I bet it would cure a defective monitor from stuck pixels.

I cannot deny that the environments were eerily empty at times, nor can I look past at the lack of variety in enemies. However, the character animations, the sheer scale of some buildings, the beautiful landscapes and the particle effects really captivated me on a visual level. Honestly, if Toei Animation did an entire episode in these graphics I would be happy, and I cannot imagine better aesthetics for a One Piece video game.

If only for more time

What struck me from the moment I launched One Piece: World Seeker is that this game feels unfinished. There is nothing overtly broken in its mechanics, and certain elements of the gameplay are undeniably polished. Yet, the lack of voiced cut scenes, the general empty feeling of the world, the repetitive nature of the side missions, and using the same models for most of the enemies are all the tell-tale signs of a game being kicked out the door too early.

In fact, the stark contrast between the excellent visuals and the bland mission design makes me suspect Ganbarion had plans to make World Seeker more like a JRPG. Whatever the intention, it is clear that their plans never came to fruition and they settled on making a more fast-paced, open world game from what they had already finished.

If you are looking to play a good One Piece game, I suggest you consider any of the Pirate Warrior instalments, because World Seeker just feels like too much of a mixed bag. This is not the kind of game we want from this beloved series at this point in time, and playing it makes it clear that the developers share our sentiments.