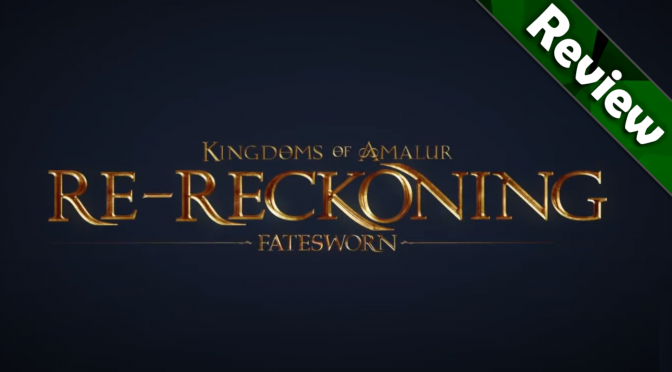 The original Kingdoms of Amalur was released back in 2012, and while it certainly wasn’t perfect, it was an enjoyable experience that left me with some fond memories. So, naturally, when they announced the Re-Reckoning Edition, I was pretty excited to get my hands on it and see what had been changed or improved since the vanilla release.

The lighting is slightly improved and the textures are a little cleaner. Unfortunately, though, it’s barely noticeable and comes at a significant performance cost in most locations. This became apparent as soon as I reached the first town (Gorhart). My fps dropped to mid-60s at 1080p from over 120fps (on an RTX2070 Super). Since I own the original game, I fired it up and went to the same location to compare both its visual and performance differences. The same location in the vanilla yielded 144fps, which is my monitor’s max refresh rate.

These underwhelming framerate issues are prevalent throughout the entire game, though they are most noticeable in some towns, certain dungeons, and a few outdoor areas. The vanilla game maintained 100 -144fps in all of these locations. Not only that, but there were also instances where the fps would actually dip to the mid-50s in the Remastered version. Setting the game to the absolute lowest details improved performance slightly, though not that much. For example one of the towns that has a very low fps (looking into Atyen), averaging between 55-59fps. That particular scene, on the lowest settings, was around 69fps. Also note that these numbers are with supersampling disabled.

After a few hours, I kept asking myself why exactly I would actually choose to play a game that barely looks any different than the original for such a massive performance hit. There are far better-looking games that run far better, even at 4k on the RTX 2070 Super. Death Stranding comes immediately to mind, which looks two generations better than Kingdoms of Amalur: Re-Reckoning.

In conclusion, those of you with slower than RTX 2070 Super cards are likely going to have issues maintaining 60fps in certain areas of this remaster. In addition, the pre-rendered cutscenes have had no improvement, but in-game cutscenes obviously benefit from the various visual updates.

The remaster properly supports 4K, which is obviously good news for those that are targeting this resolution. The bad news is that you’re probably going to need a 2080Ti  or one of the new Ampere cards to get a smooth 60fps experience.  My RTX 2070 Super was not able to get 60fps at 4K in many locations. In those unoptimized scenes, my framerate was around 45fps in 4K.

In contrast, the vanilla version, in those same locations,  maintained over 100fps, In fact, the framerates at 4K in vanilla were actually higher than what I was getting in the Remaster at 1080p. Let that sink in for a moment. The only downside with the original is that at 4K the UI becomes is too small and hard to read.

The remaster has 3 options for UI size: default, small and hidden. While this sounds great on paper, the issue is that on “default” the health bars and hotbars were too large. On the other hand, on “small” the minimap was too small. I’m not sure why the devs didn’t give players the option to either dynamically scale the entire UI or allow them to scale each part independently. The vanilla had a better-sized UI for 1080p, at least in my opinion.

In addition, the Re-Reckoning Edition has opted to change the enemy markers on the minimap to circles rather than the, more useful, arrowhead icons found in the vanilla version.

Disappointingly enough, the inventory system has not received any QOL improvements. There is no filter to sort the long list of items by rarity, type or anything like that. While you can add an item to junk and then mass sell them all to a vendor, you’ll have to add each item – to the junk – one by one. There is no way to tag a bunch of items to either discard or add them all to junk. If your inventory is full in the middle of a dungeon, or while exploring, you’ll need to painfully delete one item at a time. The same issues exist when crafting potions and moving items to your stash.

This wouldn’t be a massive issue, but Amalur is a loot-based RPG with crafting. As such, you’re going to end up with tons of materials and items. And, to be honest, I was expecting at least some improvements to the game’s inventory system.

THQ Nordic has stated that there have been some balance changes. The devs have also added a new difficulty level (Very hard) and new level zone calculation. In the original version, it was easy to out-level areas and end up being far too powerful far too early in the game since zones were “level-based”, just like in MMORPGs. Now the enemies scale within a certain range of the player level when entering a zone, depending on the difficulty they are playing on, and loot containers and loot generation have been reworked.

THQ Nordic claimed that it has done a lot of work in the background. However, I honestly can’t “feel” any difference at all between this new remaster and the original. Perhaps I’m just not noticing these changes since it’s been so long since I last played the original. Still, and even if there are any changes, they seem pretty minor to be honest. Oh, and even on hard difficulty, the game is still pretty easy.

I believe they fixed numerous bugs that were present in the original version. What I will say though is that there were several NPC dialogue windows that had camera issues. Additionally, I had around 4 crashes that required restarting the game, and there were occasional graphical glitches as well.

The anisotropic setting doesn’t seem to do much so I guess it’s either broken or poorly implemented. Thus, I had to resort to using the anisotropic setting from my Nvidia control panel. And if all the framerate issues we discussed earlier weren’t enough, there were several instances where the framerate would just tank, for no reason at all, to 15-30fps. In order to fix these particular framerate issues, I had to exit an area and re-enter it. Thankfully, this performance/optimization issue was not all that common.

As I said earlier in the review, Kingdoms of Amalur is a very enjoyable action RPG, but not without issues. The gaming landscape has evolved over the last 8 years which unfortunately highlights some of its weaknesses that may not have been so noticeable back when the original was released in 2012. For instance, there are still tons of loading screens. Every time you travel between zones or enter a building, you’ll be met with a loading screen. And let me tell you that you’ll be traveling and entering various buildings a lot. These loading issues will frustrate you, even if you are using an SSD.

In addition to barely changing anything visually (the game still looks incredibly dated), this remaster does nothing to address many of the UI issues that were present in the original game, or fix/adjust any skills.

However, Kingdoms of Amalur is still a good game, and despite its poor optimization, which is my main gripe with this remaster, I still played through the entire main story arc. It took me around 35-40 hours to finish it, along with many (but not all) of side quests. I did not finish the DLC’s for this review.

As it stands at the moment though, if you already own Kingdoms of Amalur, there is no reason to purchase the “Re-Reckoning”. You can get exactly the same experience with the vanilla version, and a far smoother experience at higher resolutions.

If you don’t own the vanilla game, then this would probably be the version to get. Even then I’d still wait for a sale. The asking price of $40 is way too high for what is essentially a re-release of the same game.

Owners of the original game on Steam have been offered a 50% discount for 2 months which is some consolation I suppose. However, if you own the game on another platform, you’re out of luck and will have to pay full price.

This remaster is low effort and it shows. Unfortunately, Re-Reckoning adds next to nothing to the vanilla game and the result is an incredibly disappointing “re-visiting”. At least THQ Nordic acknowledged the game’s performance/optimization issues and claimed to be working on them.

It’s a pity. Such a wasted opportunity. Kingdoms of Amalur really deserved a better remaster.

You can find a more detailed breakdown of the exact changes here. You can also find some comparison screenshots between the Original and the Re-Reckoning here.