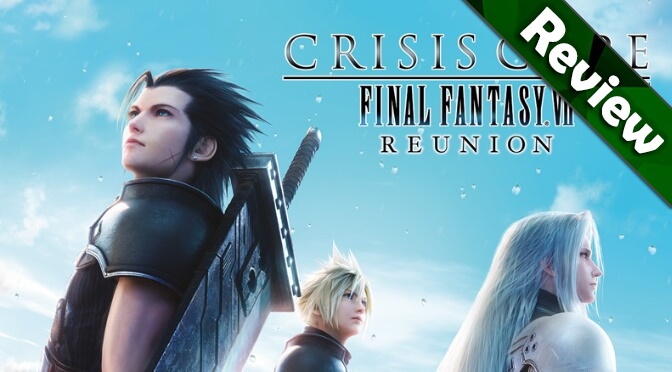 In the first ten minutes of this remastered Crisis Core, I somersaulted onto a train, dodged bullets, slashed a behemoth to pieces, and clashed swords with the infamous Sephiroth. This game knows how to have absurd and quirky fun from start to finish. What a joyous contrast to so many ‘mature’ games of this age, a palette cleanser for all those preachy games.

For me, playing this game is especially gratifying since it rights a wrong in my gaming history. Back in 2012, I got a PSP and a copy of the original 2007 Crisis Core. However, I didn’t play it since I hated how action games felt with the limited PSP controls (a dismal framerates). Being set free from the PSP, this remastered version shines with updated combat, overhauled graphics, and added quality-of-life features.

The key appeal is the effervescent charm of it all. Granted, the game falls into JRPG tropes and anime cliches. The dialogue is basic, but that feels intended. The main character, Zack, is such an earnest ball of energy that I couldn’t help but love him. This is a kooky FFVII offshoot that allows itself to be bizarre. Crisis Core reminds me of Metal Gear Rising: Revengeance, another spin-off title from a beloved franchise that revels in preposterously fun combat combined with a wacky narrative.

Still, Crisis Core delivers a powerful story with great emotional weight by the end. Despite the confusing tale of ancients, genetics, and mad science, the narrative is essential if you want to feel the full impact of the events of FFVII Remake and its upcoming sequel. Even if you aren’t interested in FFVII Remake, Crisis Core’s charm may change your mind by the end.

Crisis Core is cutscene-heavy. Often you watch several story scenes and then engage in a few battles. Then more cutscenes play. Then a few more minutes of gameplay. A short exploration segment may occur within a small area. Then more story.

Very brief mini-games are scattered throughout the narrative. For instance, I mixed perfume to achieve the perfect balance of fragrance. I engaged in a short Metal Gear Solid-inspired infiltration mission (of subpar quality). I built flower wagons and achieved nearly six-dozen squats in a row. I once checked twenty-three voicemails in succession and joined a Sephiroth fan club. I told you Crisis Core is quirky!

Apart from the linear story divided into strict chapters and brief mini-games, missions are the other main activity. Missions load you into bite-sized linear maps that take 30 seconds to maybe 5 minutes to clear. Each mission may have a treasure chest or two to find and a boss enemy to kill. You can access missions from any save point, which is highly convenient. Talking to some NPCs in a few small city zones can unlock missions. There are hundreds of missions meant to slowly test your skills and let you unlock better loot and level up.

The mission system was obviously built for handheld gaming on the PSP originally, but I enjoyed it. If I had 15 minutes to play, I could boot up the game and knock out two, three, or maybe more missions. A total progression system gives rewards for reaching completion percentages, which encourages slow but steady determination.

What holds Crisis Core together is the fantastic real-time combat. It’s so simple to play but has unexpected depth. Dodging is very effective, and striking the backs of enemies works well. After a few hours into the story, you unlock more options to customize your character and materia (abilities and spells). A materia level-up system encourages swapping around abilities, and a materia fusion system lets you experiment and create new spells.

Further into the narrative, you unlock end-of-combat bonuses for taking no damage or finishing enemies in specific ways. This sounds simple, but this little addition keeps combat interesting. Even basic battles become a chance to restore HP/MP/AP through skillful playing. More games need such a motivating combat system.

Combat also features a Digital Mind Wave (DMW) system. What is DMW, you ask? It’s an odd way to randomly unlock ‘ultra’ attacks during combat tied into story characters and summons. DMW is weird, but it’s easy to use when you play the game.

You can easily escape almost all random battles by running to the edge of combat. It’s easy and saves much time when you don’t want to grind. Lengthy summon animations can be skipped with a single button press. You can restart the battle and even change your gear if you die. Such forgiving options are welcome and help avoid frustration.

Crisis Core’s PSP roots show throughout the entire game and on the technical side. The level design is ultra-simple: corridors, hallways, and some open fields. Everything is tiny, meant to fit into ancient PSP memory limitations. On the plus side, the game loads near-instantly, and the PC port is adequate.

The game performs well and can run up to 120 frames per second. The graphics options are minimal, but everything renders cleanly. The biggest downside is the prerendered cutscenes. They are upscaled versions of the PSP originals that look muddy and low fidelity compared to the Unreal 4-powered in-engine gameplay. Newly rendered FMVs would have been nice.

The music and audio are both excellent. Spell sounds are crisp, and the graphical effects are impressive. Some people rave about the music, but it’s mostly an extension of FFVII’s superior original soundtrack. Full voice acting is a terrific addition and mostly excellent in quality. Even if the dialogue is weak, the voices work because the actors are so committed to their lines.

Crisis Core isn’t a long game, story-wise. At about 10 hours in, you get to the point of no return. The game nicely warns you and gives you a chance to pause the narrative and keep completing side content. I put another 5 hours into the mission system before finishing the game at around 20 hours total. Still, after an entire playthrough, I barely reached 40% mission completion, with many missions being impossible for my character level.

Thus, the game intends for serious players to play the game several times over using New Game Plus, even though there is zero new story content in subsequent playthroughs. Moreover, Crisis Core is jam-packed with missable achievements. You will likely need an external guide to find many of the game’s esoteric and downright obnoxious achievements.

Even worse, New Game Plus doesn’t save your mission completion. Each playthrough requires grinding every single one again, even the low-level, low-reward ones. This is one of Crisis Core’s few true design blunders. Regardless, it can be great fun to speed-run additional playthroughs. With all cutscenes skippable, you can crush another story run in mere hours.

The bottom line is that most players will only care to finish the narrative once, which can be done in 10 to 15 hours if you skip the grindy optional content.

On paper, this PSP-era game shouldn’t be so much fun, especially in 2022. And yet, I had a great time with Crisis Core’s endearing thrills delivered nearly every minute. Its heartfelt, well-paced narrative and surprisingly sophisticated combat make for an eccentric yet engaging experience. In a world of ‘intense’ and ‘serious’ games that demand you bow to their pretenses, Crisis Core is both a blast from the past and a breath of fresh air.

That being said, the asking price is simply too steep when compared to more robust modern game packages. Hence, Crisis Core is a perfect half-price game. Pick it up for cheap and you’ll be even more delighted by this tasty PSP-era gaming treat.

Playtime: 30 hours. Nick spent about 20 hours on his first playthrough. He completed another in about 5 hours and spent additional time on the end-game missions.