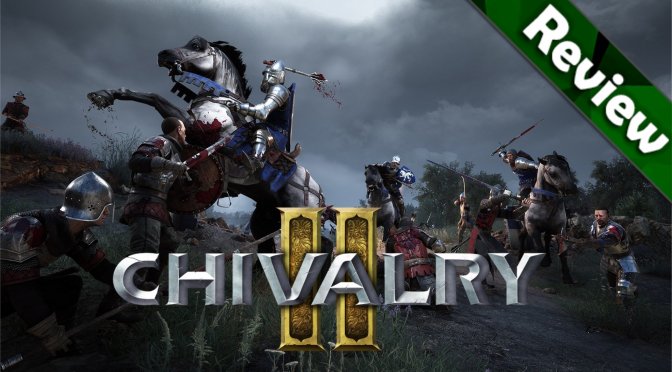 Chivalry 2 came out last month on PC and Torn Banner Studios has expanded every aspect of the original game, making it feel much less like an indie title this time around. Additionally, the team has improved the quality of both its visuals and audio, along with its overall scope.

Chivalry 2 is a multiplayer first-person/3rd person slasher with up to 64 players. The two sides Agatha (Red) and Mason (Blue) fight each other across various maps to achieve victory. Some of these are purely “team deathmatch” and others are objective-based across multiple stages.

There is no campaign, and the only time you’ll be playing solo is either during the tutorial or when you practice against bots (which are pretty dumb).

For those wondering, I thoroughly enjoyed the original game while back in 2012. And, after having played around 25 hours of the sequel, I’ve come away quite impressed with what Torn Banner Studios has managed to create here.

Visually, Chivalry 2 is an improvement over the original game. The art design,  as well as the size of levels and audio manage to create the feeling of chaotic medieval battles. I don’t really have much more to say here, just take a look at the screenshots that accompany this review. The music is great as well and really drives the action.

Combat as you can imagine is the primary part of this game. There are 3 basic attack types. A horizontal slash, an overhead attack, and a thrust. The direction of these attacks can be moved to the opposite side by holding ALT (left to right instead of right to left for example). So, 6 directions essentially which can be chained together to form short combos.

Then there is a feint, a counter and a riposte (parry). The feint is self-explanatory. Feinting can trick your opponent into blocking too early which could allow you to deliver a hit. Timing your block correctly allows you to risposte (which allows you to get in a free hit). Countering is harder to pull off since you need to block and match your opponent’s move (so if they slash, you’ll need to match their slash). If successful, you’ll get a hit in.

Holding block in Chivalry 2 will drain your stamina, so in general, it’s best to time your blocks rather than holding it.

Finally, there is a jab which serves to break the rhythm of your opponent, and a kick that breaks blocks.

While this does not at first seem to be a very complex set of moves, the combination and timing of them make for a deep and immersive combat system that will certainly take time to master.

This is enough to keep you occupied when you’re fighting a single opponent, but due to the nature of Chivalry’s chaotic battlefields, you’ll likely have more than one opponent trying to kill you, or enemies coming up behind you when you’re engaging with someone else. This is not a real issue though. It just forces you to strive for better positioning, being aware of your surroundings, and making sure you’re not out of position which will put you into unwinnable situations. After all, you’re not an ultimate warrior. You are just a grunt so if you get outnumbered you’re usually toasted Still, there are moments (like when you manage to kill multiple enemies or get a particularly high killstreak) that feel very rewarding, and the better you get the more often these will happen.

There are currently 8 maps in the game (with more coming soon). Five of them are objective-based, and the remaining three are for team deathmatch.  All of these can be played on either 64 or 40 player servers.

The objective modes were, for me, the most enjoyable part since they create impressively chaotic medieval battles. Each of these maps is divided into sections. For example, in the “Fall of Lionspire” you need to breach into the city of Lionspire with Rams, capture the town center, breach the castle and destroy catapults. Or in “The Slaughter of Coxwell”, the Agathians descend on a village, killing all the civilians, setting the village alight and then looting all the gold from the town.  All of these modes are varied and interesting.

As a direct result though, the team deathmatch mode is, well, only team deathmatch. That is not to say that it’s bad, but it’s certainly less epic as a result because it is only about which team is getting more kills and reducing the other team’s tickets to zero.

There are also a number of FFA (Free for All) servers, which serve more as a dueling ground than actual FFA. Players will square off 1v1 and if you gang up on others you will get kicked. It’s a good place to test your skills.

There are currently 4 classes in Chivalry 2, with 3 subclasses in each. These four classes are the Archer, the Footman, the Vanguard, and the Knight.

All of them have strengths and weaknesses (more/less health, more/less damage or slower/faster movement). Moreover, there are slight variations of them depending on which subclass you choose to play, as well as some different gadgets. For example,  the footman can throw medpacks to refill teammates’ bandages. The Vanguard gets a horn to do an AOE heal. And then the archer can lay traps. As such, there is a fair amount of variety, and you can tailor each class to your playstyle.

As you level up each subclass and its weapons,  you’ll unlock new weapon options and various customization options for both your weapons and armor for that class. The good news is that there are a fair amount of options available. So, in addition to customizing your actual character’s general features, you’ll get an array of cosmetic options to make you stand out from the crowd. The bad news is that unlocking new customizations does not mean you get to use them. You still have to purchase them with the in-game currency which is relatively slow to earn.

I never came across any notable technical issues with the game during my time with it aside from some minor fps drops that were sorted out when switching to DX12 (beta mode) and adjusting a few settings. After those changes, the game ran at a stable 60fps at 1080p even at the most intense times.

As I mentioned earlier, earning gold is very slow. The issue I had with this, is that everything is very expensive and you only earn around +-600 gold per match if you win. If you lose, you get half of it. To put it into perspective, in my 25 hours playthrough I earned around 45k gold.

A sword skin could cost around 3000, but a royal double axe skin costs around 16000 gold or 375 crowns (premium currency). And then there are still other armor, other weapons and heraldry. This is before we even talk about customizing the other classes.

Now I don’t have an inherent problem with paid cosmetics, but when I see there an MTX store where you can buy premium currency (and it’s not cheap either, 500 crowns for $5)  I start to wonder if they put the cosmetics behind a grind wall on purpose to incentivize making purchases in the store.

However, my biggest concern is the longevity of the game. Unless you’re a very specific kind of player, I can see this eventually getting repetitive, despite it being a good game. For me, it’s probably the kind of game I’d revisit after content updates for a bit and then move on until the next update comes out.

EDIT: A final thing that I forgot to mention, is that the game is an Epic store exclusive. I had this as a con in my Hitman 3 review, so I’ve added this as a con here as well, since some may not be interested for this reason alone.

Tripwire’s statement regarding the issue:

All in all, Chivalry 2 is an excellent game and has a fair price point for what you are getting, and you can certainly get a good many hours of enjoyment out of it without spending money on MTX.  If you enjoyed Chivalry 1 or Mordhau, then Chivalry 2 is likely worth checking out. The developers will also be adding more maps and modes according to the roadmap which can be found on their webpage (this includes mounted combat I believe).