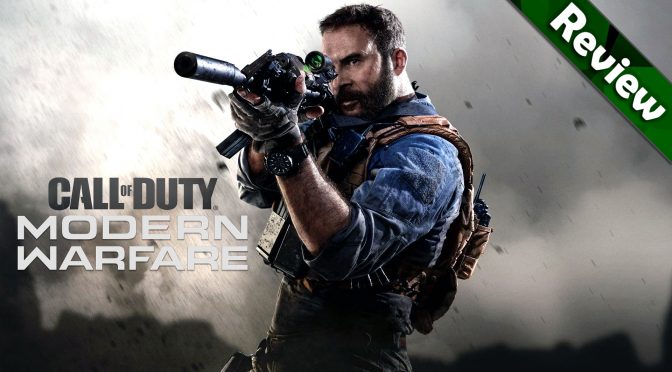 There have been sixteen years since I first played the original Call of Duty. While the franchise had its ups and downs, it is still going strong after all those years. For example, Call of Duty: Infinite Warfare’s trailer is one of the most downvoted videos in its entire history. On the other hand, the original Modern Warfare, is one of the most beloved first-person shooters ever made.

Call of Duty: Modern Warfare is the sixtieth title of the series. The game was developed by Infinity Ward, published by Activision, and its PC version was handled by Beenox. This is a reboot of the original game, thus the story is almost entirely different. This is also the first time a Call of Duty game supports cross-platform multiplayer, something I believe it’s worth mentioning even if this review will only cover its single-player campaign. Call of Duty: Modern Warfare is not for children, if it ever was. The campaign is dark, brutal, shocking and definitely only for mature audience. The game will remind you of this, each-and-every-time you open the campaign tab, which was a bit annoying to be frank.

As I said, the story is dissimilar compared to the original, but the main plot is kind of the same. Some bad guys are doing bad things and the good guys are trying to stop them, from doing even more bad things. There is also a classic revenge story thrown into the mix. I mean, there is nothing original here. Fortunately, though, the presentation is excellent and it helps a great deal in this seven hours long campaign.

Once again you get the opportunity to play with several characters and experience the story through their perspective. There are also a few returning characters from the original game like Captain Price. Sadly, you cannot play as him, but he will accompany you in numerous missions. You can even play as a little girl, who can actually hold, shoot and reload a revolver. Yes, you read right; there is an animation of a ten year old kid reloading a revolver. You can even see the recoil of the gun realistically pushing her back. It is crazy and kudos to Infinity Ward for this level of detail.

This is the first Call of Duty that looks so pretty. It is visually impressive for such a title, even without an RTX card. Very few games created realistic nights and this game excels on the subject. However, the game is currently plagued with technical issues. For instance, I had several crashes, slowdowns, freezes and audio delays. The cutscenes are completely messed up, which is a shame, since they look totally flipping gorgeous. 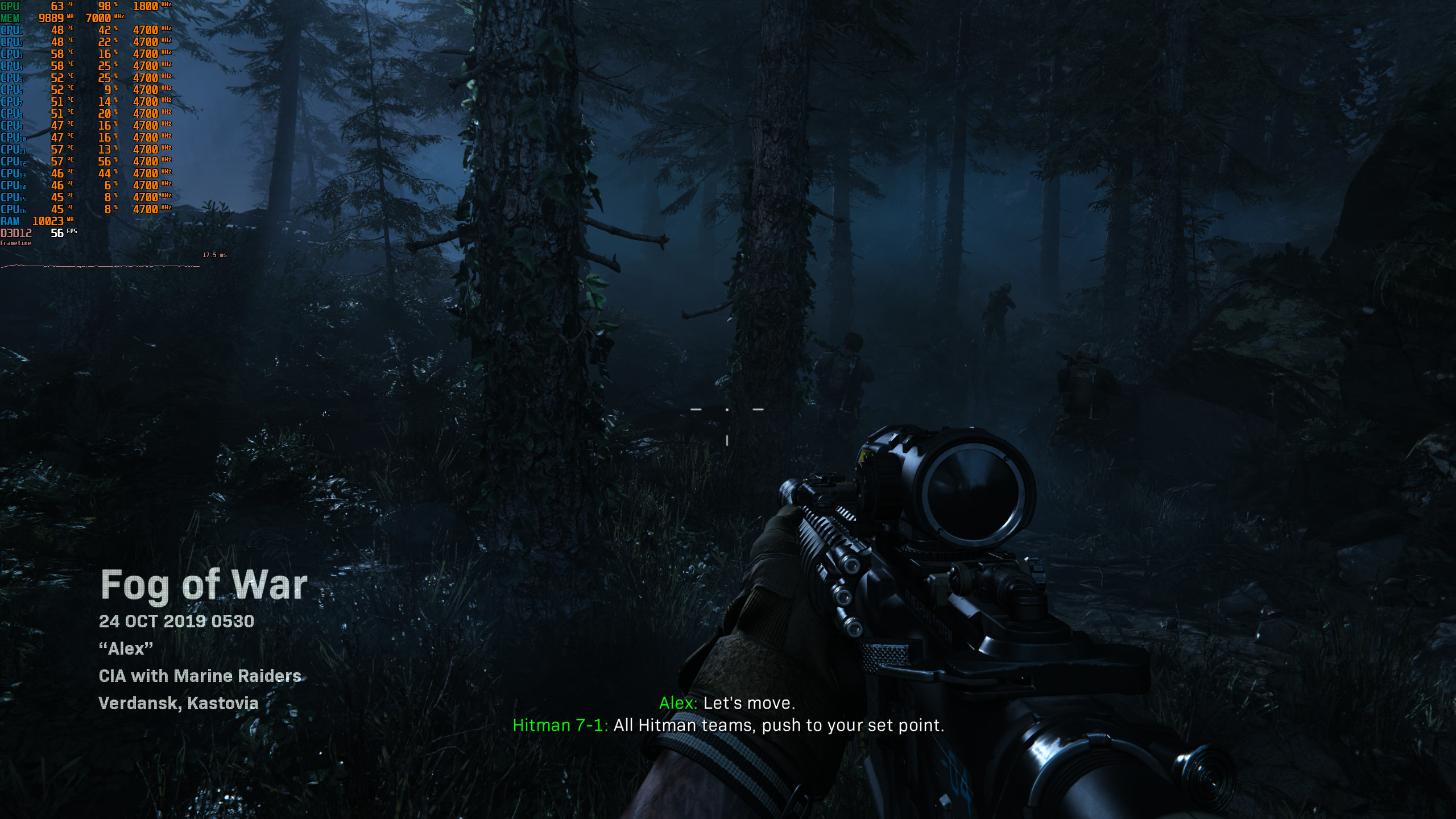 Also, for some reason, every time you launch the game, it starts installing shaders which makes everything, even the freaking Activision logo stutter. So far I found no way of resolving any of these issues. And despite all these issues, the game runs extremely smooth. With everything almost maxed, I had stable sixty frames per second, all the way through the whole campaign. For more details you can read John’s performance analysis.

The audio is also great. From gun sounds to explosions, everything sounds grand. The music is minimal but most of the tracks blend in nicely. The voice acting is very good as well, and the same goes for the lip-syncing. Also, and despite the cut-scene audio issues, I did not encounter any audio glitches while actually playing the game.

The controls are solid while playing with mouse and keyboard and there are several available settings to customize to your liking. I suggest changing the default button for cover which I found it to be working best with the right click. So yeah, don’t be afraid to experiment a bit to find what’s best for you, especially since cover can be an important asset during firefights and clearing corners.

Shooting is the name of the game

The gameplay is pretty much fantastic, especially compared to the previous titles. In the beginning of almost every mission, you get to see your playable character, before the camera moves into a first-person perspective. Now you can actually witness how your character looks like. Moreover, the majority of the missions differ from each other, making the game less repetitive. 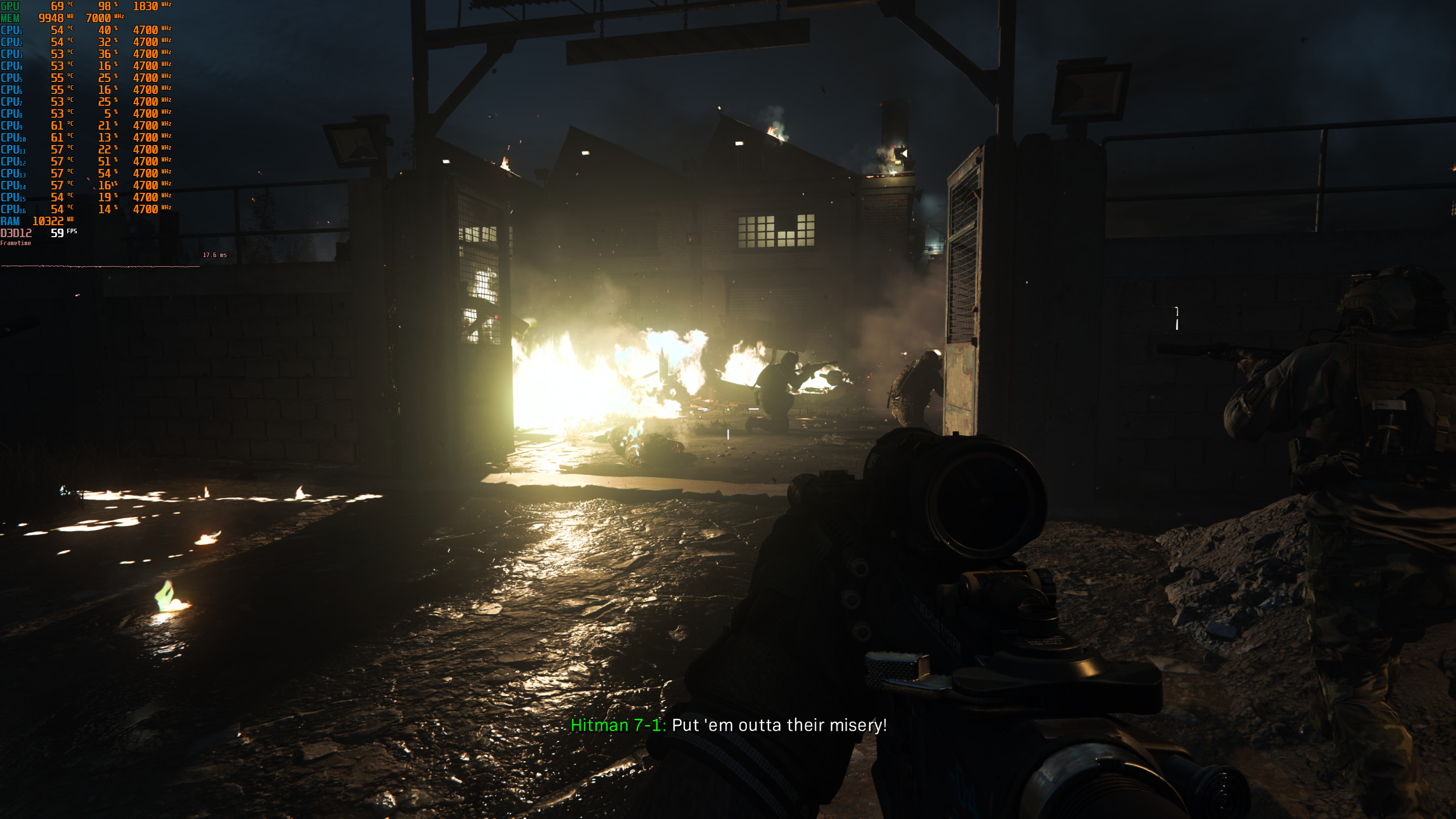 Of course the gameplay does not drastically change. You will still spend most of your time shooting, but there are a couple of missions that play almost completely different. Personally, I enjoyed playing with all the characters, even if my all time favorite character Soap is not in the game. Unfortunately, there is very little character development and only for specific characters.

My favorite mission, by far, was the one using a high-caliber sniper rifle, where you need to take into consideration gravity and wind. Every sniper shot dismembered enemy body parts and it was glorious. Sadly the rest of the gore in the game is mediocre. Only snipers can dismember enemies and the dismembered parts vanish.

“When you take your gloves off, your hands get bloody”.

The game also lacks a wound system as there are no bullet holes or knife wounds. But hey, at least there are blood puddles. Honestly, from what I was reading prior to the game’s release, I was expecting something more gruesome. Also, dead bodies do not stay forever like they used to. Call of Duty was one of the very few games in which you could adjust the amount of dead bodies. Sadly this is not the case here. 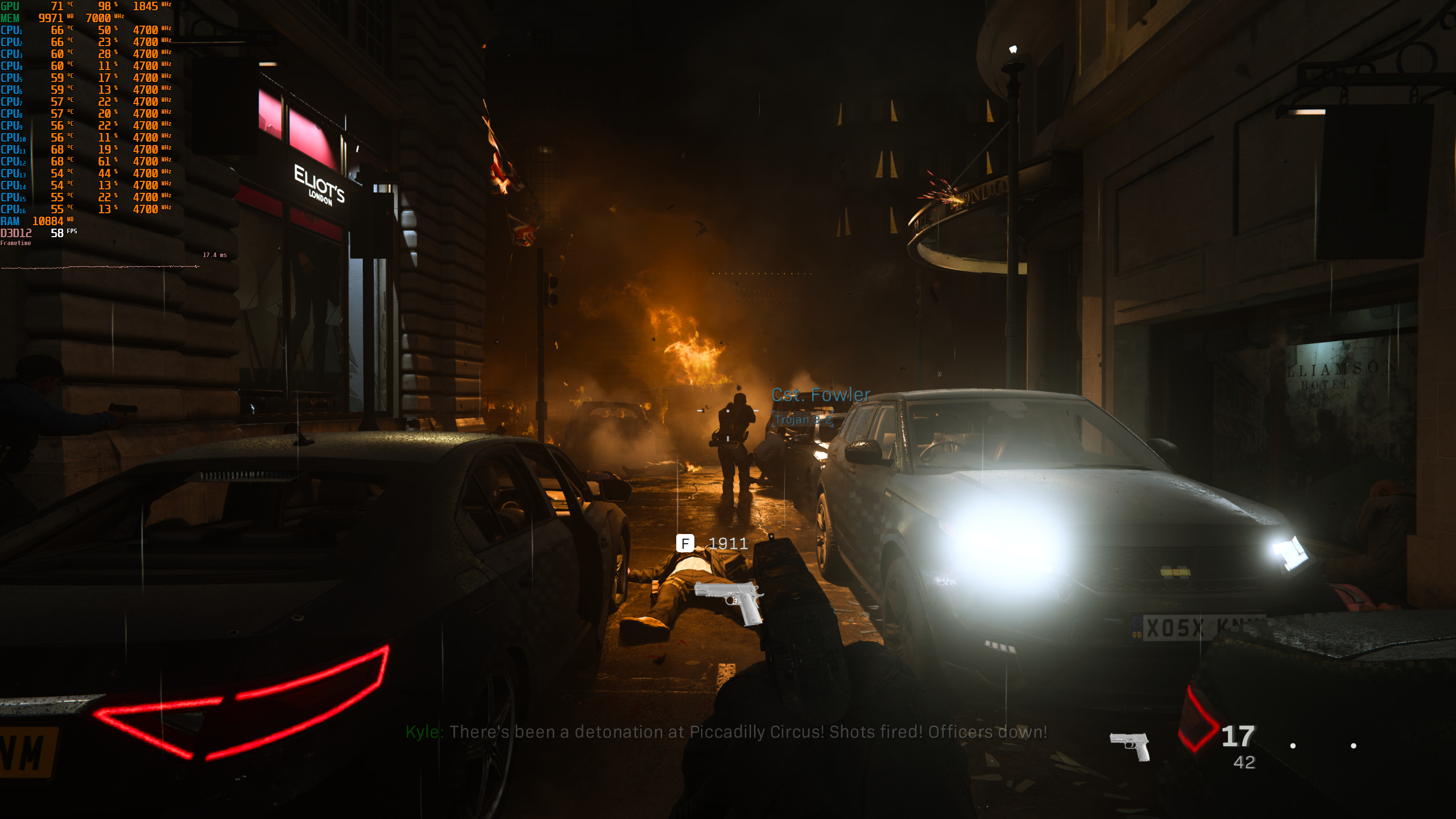 And that really puzzled me. Infinity Ward wanted to make a more realistic shooter this time around. That’s why I don’t get why they didn’t put a bit more effort into the gore. On the same subject of realism, I have to say that the friendly A.I. is completely useless. They just suck at their job. I don’t know if it’s the “Stormtrooper training” or whatnot. Seriously, they can’t kill for crap.

The gunplay as always is particularly good. I mean this is a Call of Duty we are talking about. Most of the guns feel great and I love some of the reload animations. Generally speaking, shooting feels a bit less arcade-ish compared to the previous games. And while pray & spray is still a viable solution, most of the guns require some recoil management, unless you are in cover.

“We get dirty and the world stay clean”.

Something I never liked in Call of Duty was the pre-selected weapon loadout. In fact, I do not recall ever having the choice to select the weapons on the beginning of each mission. Of course you can still pick weapons throughout the missions but all of them have preset attachments. There is no weapon customization of any sorts.

Regarding cover, I have to say I got mixed feelings. While I do appreciate a cover system in a shooter, it seems they made it kind of necessary in specific sections of the game. Of course you can still play without using it, but what is the point of having such a feature and never use it? 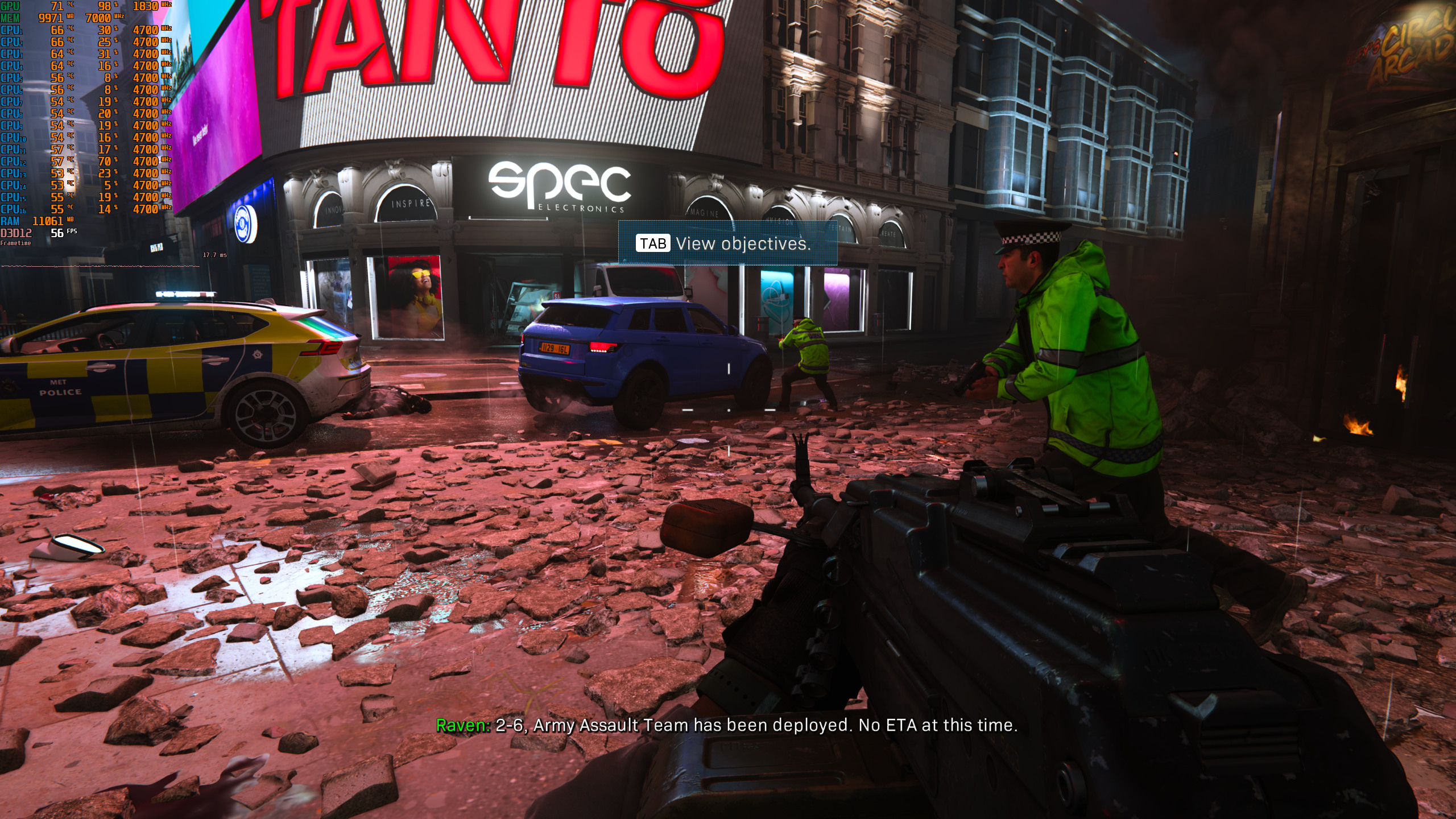 You can take cover almost everywhere and while doing so you get less sway and recoil, while also shielding yourself from enemy fire. You are not invincible though as you can still take damage while aiming. Even so, the game becomes much easier this way. It makes more sense in the highest difficulties, at least for me. Honestly, I would much rather prefer a simple lean mechanic.

Moving through the battlefield

I really like the movement in the game as it is slower than before. It can still be a fast-paced shooter if you wish, but not in every mission. For example, there are quite a few missions that force you to play slower and more tactical. Personally, I really liked those missions, especially the one in London where you raid a house as an SAS operative.

Captain Price ending the conversation with the CIA.

Most of the animations are superb and help a lot with the immersion. More often than not, the NPC animations are not great in video-games, but in this particular title they actually are. There is even a movement lock when you follow other NPCs in order to match their movement speed, and I really appreciate that.

Bringing a knife to a firefight

Now melee is mixed bag. You can melee hit with your gun and you can also perform a finishing animation with your knife. Unfortunately, there is a delay before you can actually get the prompt to perform the finisher, making it neither fluid nor satisfying. Also the butt-stock melee kills the enemy, which is just bizarre. 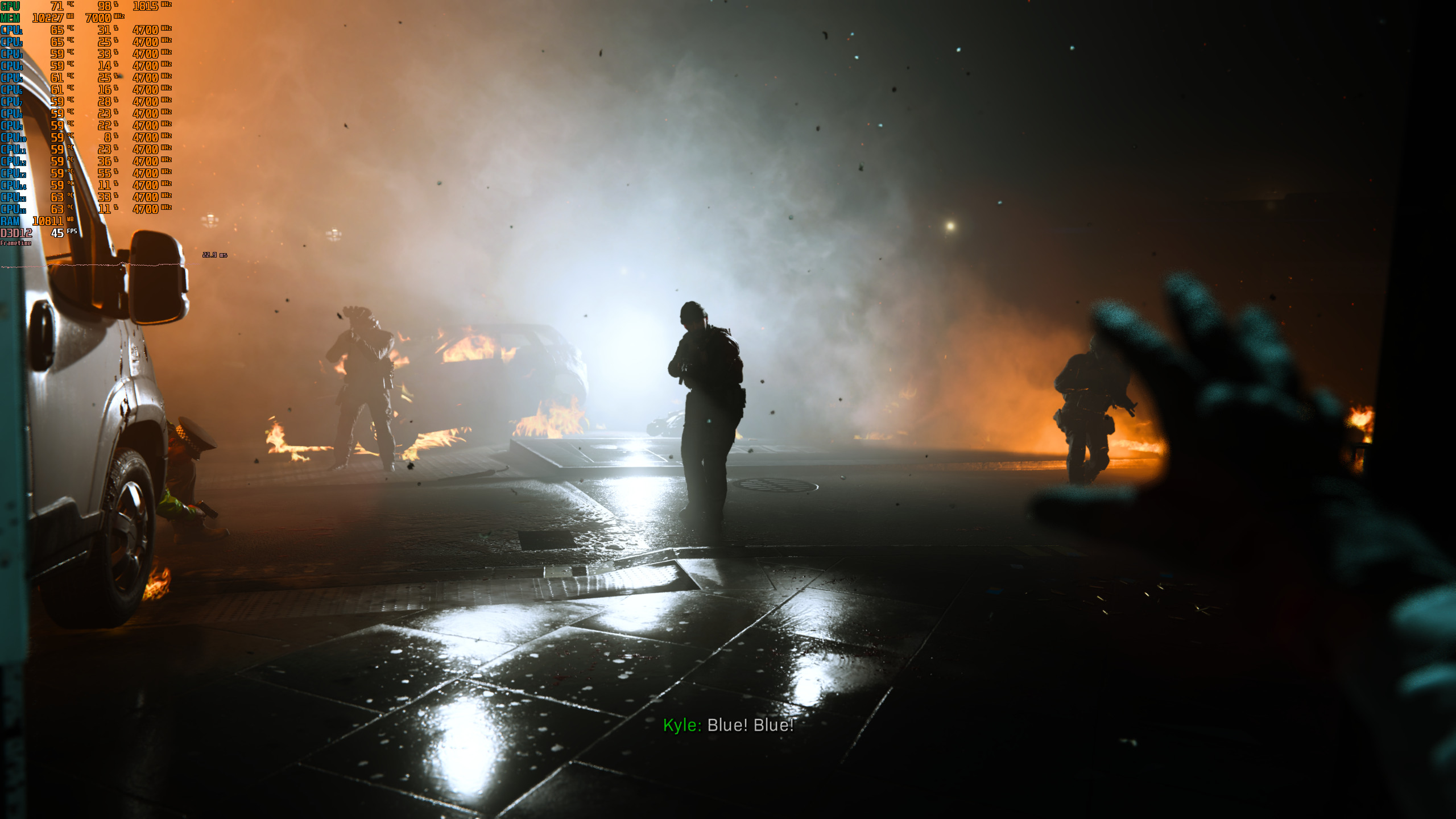 The body physics and death animations are way, way better this time around as most enemies have death animations. If you shoot unarmored enemies once, you will see them get into a death state animation. But if you shoot them multiple times they usually just drop dead on the ground, without any unique animation. It’s not perfect but it still looks better than any previous Call of Duty title. 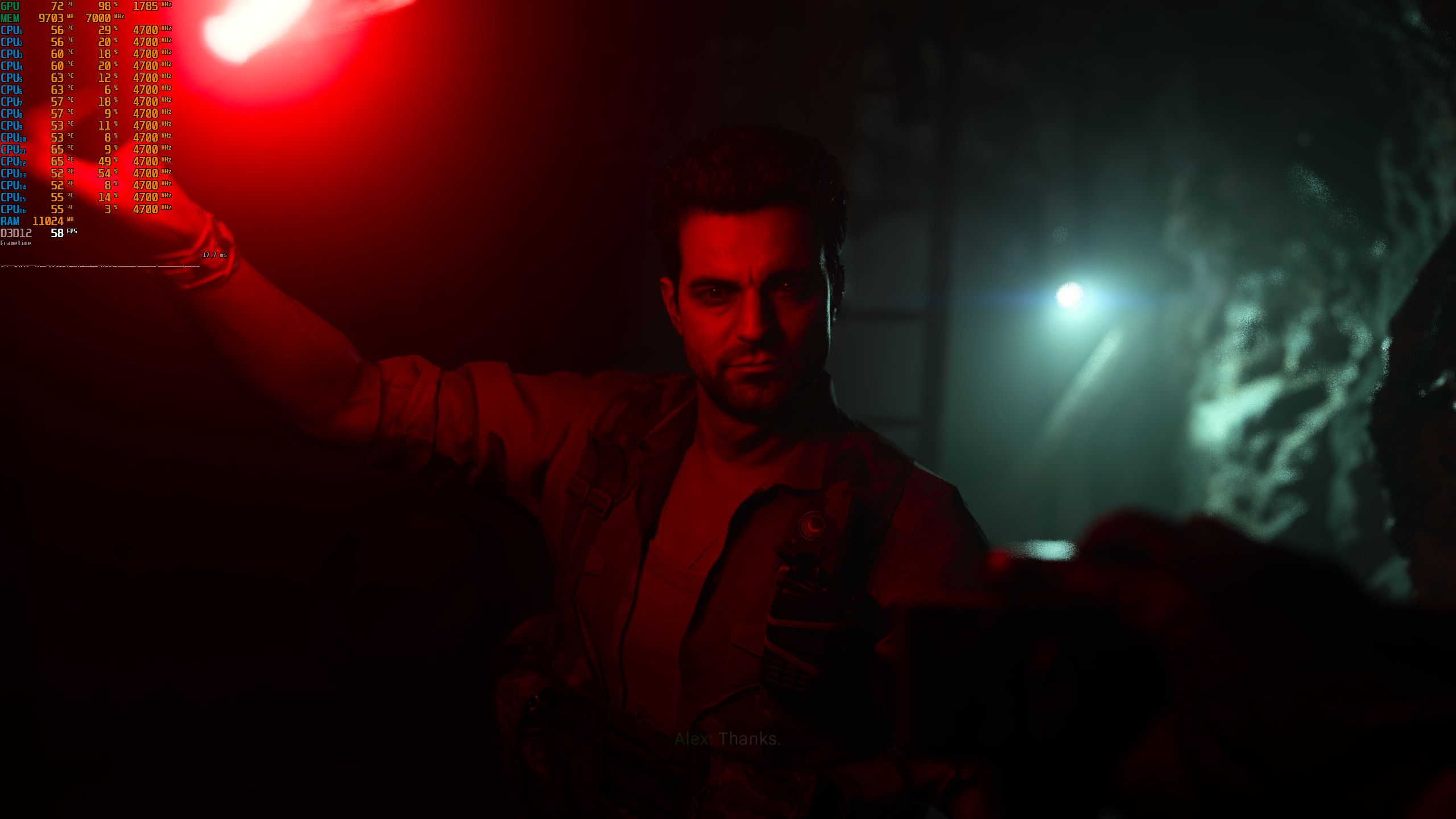 This is still a game

Personally I did not have any problem with any of the missions, in terms of violence and such, but that’s just me. The “No Russian” mission in Modern Warfare 2 was way more shocking and plain inhuman. If I have some issues with the campaign is the lack of a proper wound system. Also the blood puddles look mediocre, but at least there are blood decals from gunshots.

In my seven hour long playtime, I have to say that Call of Duty: Modern Warfare really entertained me. The slower paced gameplay might not be for everyone, especially for people who love the previous futuristic Call of Duty games. On the other hand, if you – like me – loved the original Modern Warfare, you will also like this. COD4: MW was extraordinary and definitely my favorite Call of Duty game. This one is close and probably the second best, but still inferior to the original, at least in my humble opinion.

Farah after Alex commenting on her cat like reflexes.

I prefer slow paced tactical shooters but sadly there aren’t many anymore, and most of them are not that great. Infinity Ward did something they never did before and – from my viewpoint – it worked out great. It’s not perfect but it retains the COD identity. 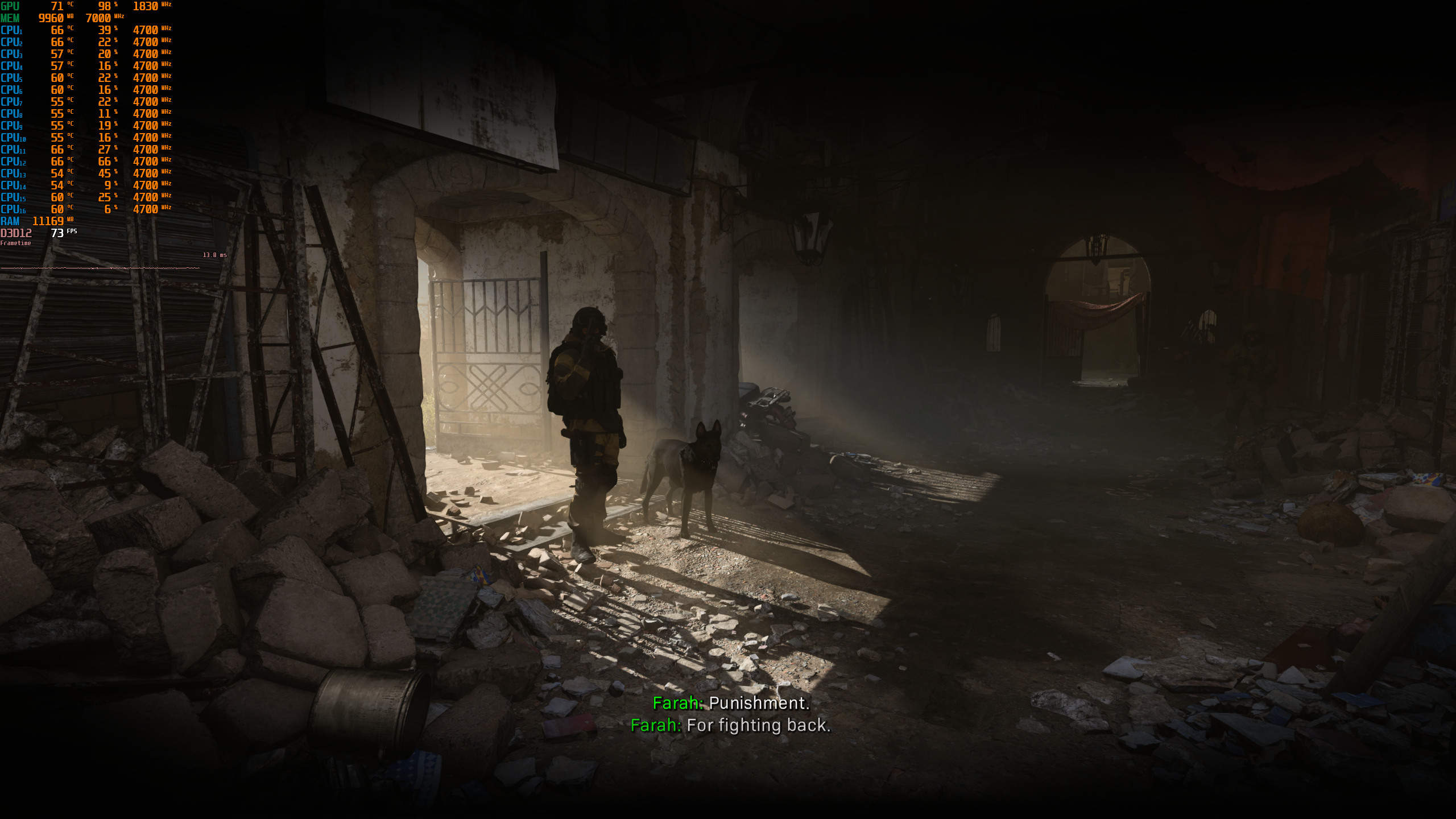 Paying a full triple-A price for a seven hour campaign is probably not worth your money. At least right now. Perhaps on a sale. If you are interested in the multiplayer, I would still not recommended the game as it is beleaguered with technical issues, like any other multiplayer game on launch. My suggestion is to at least wait for a couple of patches.

Note: All screenshots are taken from John’s performance analysis, due to incompatibility of the game with my capture software.