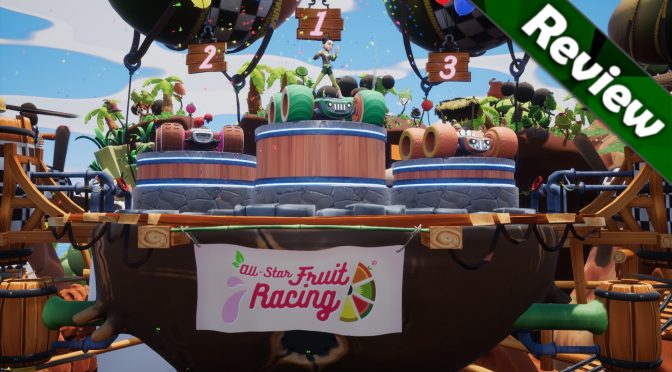 In the 2012 Disney animated hit Wreck It Ralph, you might recall one specific moment when our hero accidentally finds himself trapped in an arcade game called ‘Sugar Rush.’ For the unacquainted, the fictional game is a kart racer based around the theme of candy and confections, and in the movie it represents something of a light satire on Mario Kart.

I remember watching this movie and thinking how interesting it would be if someone were to make a real game based on Sugar Rush’s concept. Candy could actually be quite a versatile idea for a kart racer since it allows for some colourful graphics and playful vehicle designs. Interestingly, there was an MMO version of the game in the works for a while, but it has since been cancelled.

Lo and behold, an indie developer from Milan named 3DClouds.it have come about as close as you could get without having to hand over a licence fee to Disney. Their debut title, All-Star Fruit Racing, is everything we could possibly want from Sugar Rush, except that the game is based around fruits instead of candy. So as a bonus, it’s vegan, diabetic and gluten friendly too!

Let’s tackle the most obvious question up front: Indeed, All-Star Fruit Racing plays a lot like the wacky and drift-obsessed kart racers that you would expect from Nintendo. However, 3DClouds.it have still managed to make their game feel unique by really owning their tutti-frutti theme both in terms of gameplay mechanics and aesthetics. What we have here is safely more than your average Mario Kart knockoff.

Aside from custom events, All-Star Fruit Racing offers a single-player mode in which you proceed through a series of ‘fruit cups’ made up of four to five different modes of racing. Based on your overall standing at the end of these races, you are awarded with a medal, cosmetic customisation goodies for your kart, and the next fruit cup on a different island becomes playable.

As is typical of this genre, the racing plays out on loopy, gravity-defying tracks that urge the player to use vehicular combat and acceleration tiles to get in the lead. A key ingredient to the gameplay is of course the drifting mechanic which delivers a brief but crucial speed boost once the kart straightens out again.

It is obvious that 3DClouds.it have put some work into making the racing tight and exciting. We all know that good kart racers are rarely obsessed with speed. It is about the ability to tailor a strategy between the player and the track, and All-Star Fruit Racing pays attention to this.

This is why I also appreciated All-Star Fruit Racing’s take on the power-ups, or ‘Fruit Juicers,’ that give the player some aces up their sleeve to use throughout the races. They come in four basic abilities, but the party really begins once you start augmenting their effects by combining them.

To give one example, the watermelon juicer by itself produces a puddle trap that the player can drop right in the path of that one driver they cannot seem to shake. Alternatively, you could make a combo attack with the grape juice tank to make a ball of water blast out ahead of you. The watermelon power-up can also be combined with both the kiwi and cherry juice to leave behind three gigantic ice cubes for unsuspecting karts to crash into.

I cannot quite fathom how grape juice creates a tornado, or how cherry juice gives a slight speed boost, but who cares. It was fun experimenting with the different combos and I could eventually get quite crafty with my offensive and defensive strategies.

Combining all four fruit juices unlocks your driver’s special ability which varies depending on which one of the game’s twenty-two colourful characters you chose to drive with. The comparison to Sugar Rush is funny here because the characters are also mostly girls .

If you select Amelia in her yellow ‘Kill Bill’ suit as your driver for the race, activating the special ability makes her yank out a bazooka which fires a banana rocket. Choosing Faith fires a watermelon shark fin that swims out onto the track and attacks other drivers, while opting for Gisselle spawns a chomping, avocado monster on her kart. Yes yes, not a fruit, I know, but you get the general idea.

[EDIT: Apparently, avocado is, in fact, a fruit! I blame my teachers…]

Aside from choosing your character, you can also add cute little beautifications in the kart customisation section for some personality among the competition. I aimed for something macho that would intimidate my opponents on the track. So, I naturally painted my kart an eye-straining shocking pink with baby blue on the tyres, spiked a strawberry on my antenna, and adorned the grill with a smiley face. That will show them!

I think All-Star Fruit Racing’s vibrant presentation can speak for itself thanks to the power of the Unreal Engine 4. After I pushed the antialiasing a little harder through NVidia’s control panel, the game’s bright colour palette and cartoony style really shined on my monitor. Your GPU will probably not break too much of a sweat to get a smooth frame rate, but the game is every bit as pretty as it needs to be.

3DClouds.it has included the mandatory split screen shenanigans in which you can race against friends. I asked my dad to play with me in local, split screen multiplayer and he liked it (before expressing deep concern over my enjoyment of such a campy game). Despite my sincerest efforts, I failed to get an online match to work so my apologies for not being able to comment on that.

I am still not sure why I had such a good time with this one. Maybe because it has such an original visual flair, or perhaps it was simply that good kart racers have mostly been the privilege of consoles until now. Maybe because I just saw the new Cyberpunk 2077 gameplay?  What I do know is that this game should be regarded as one of the most earnest attempts at bringing Nintendo quality kart racing to the PC. It would be difficult to imagine anyone who would dislike this.