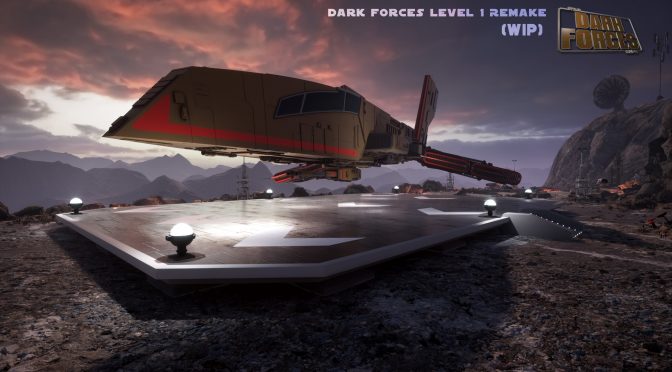 Jason Lewis, senior environment artist at Obsidian Entertainment, has shared some new beautiful screenshots from his upcoming Star Wars 1995 “Dark Forces” Level 1 remake in Unreal Engine 4. These new screenshots show off the latest build of this fan game, showcasing its amazing visuals that are powered by Epic’s Engine.

Star Wars: Dark Forces is a first-person shooter that came out in 1995, and used the Jedi Engine, which was developed specifically for the game. This engine added gameplay features to the first-person shooter genre which were uncommon at the time of release, including level designs with multiple floors and the ability to look up and down.

As Lewis noted, the first canyon area of the level is pretty much done minus a little bit of polish that still needs to be done, and one of his friends is currently working on a Storm Trooper model, meaning that we may soon see some characters in the level.

Now I don’t know whether Lewis aims to release this map to the public (and my guess is that this won’t happen) as Electronic Arts would immediately shut down this project in case it got released for free. I assume EA has not sent Lewis a C&D letter yet is because he is working at Obsidian (and he is not your average indie/enthusiast 3D artist). In other words, this Dark Forces fan remake may never get released, so we’ll most probably get some screenshots from the final project (as well as  a fly-through video).

So yeah, it sucks that we won’t be able to experience this Dark Forces remake in Unreal Engine 4 ourselves. Still, we believe that some Star Wars fans may find it interesting so go ahead and enjoy the following screenshots!