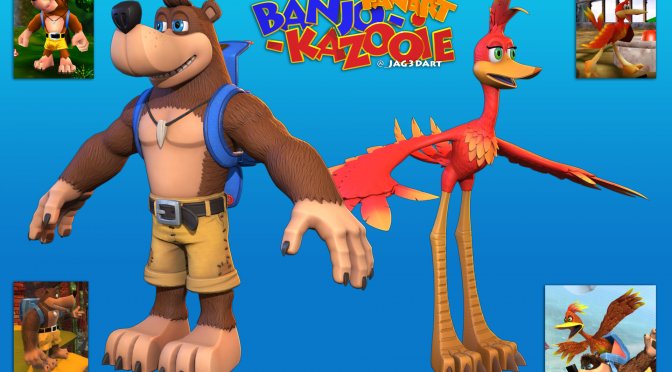 Banjo-Kazooie is a platform game that came out on Nintendo 64 in 1998. Now while there isn’t any official remake for this game under development, 3D artist ‘Jaime A Garcia‘ has released some screenshots, showing what a next-gen remake could look like.

According to the artist, the main goal of this project was to bridge the gap between the original N64-look and the Nuts and Bolts aesthetic, and also to bring them up to today’s stylized standards.

Jaime A Garcia has created from scratch a lot of characters from Banjo-Kazooie. Below you can find screenshots for Bottles, Tooty, Klungo, Mumbo Jumbo, Gruntilda and the main protagonists.

Not only that, but the artist has also included the original 3D models in some of the following screenshots. These comparisons will give you an idea of the graphical jump we’d see in a proper remake of this title. Moreover, it shows how close to the original material Jaime A Garcia has stated.

Spyro The Dragon and the Crash Bandicoot series have received amazing remakes, and MediEvil Remake is right around the corner. Moreover, there are also rumours for a remake of the first two House of the Dead games. As such, there is still hope for a Banjo-Kazooie Remake.