A couple of days ago, Deck13 claimed that the PC version of The Surge was not a console port, but rather a proper PC game built for our platform. Well, the game has just been released so it’s time to see how The Surge performs on the PC.

For this PC Performance Analysis, we used an Intel i7 4930K (overclocked at 4.2Ghz) with 8GB RAM, NVIDIA’s GTX980Ti and GTX690, Windows 10 64-bit and the latest WHQL version of the GeForce drivers. NVIDIA has not included any SLI profile for this title, and unfortunately there is no way to enable SLI via the NVIDIA Inspector Tool. While the SLI profile for The Witcher 3 offers nice SLI scaling, it also brings a lot of flickering. As such, we strongly suggest avoiding it until NVIDIA releases an official SLI profile. 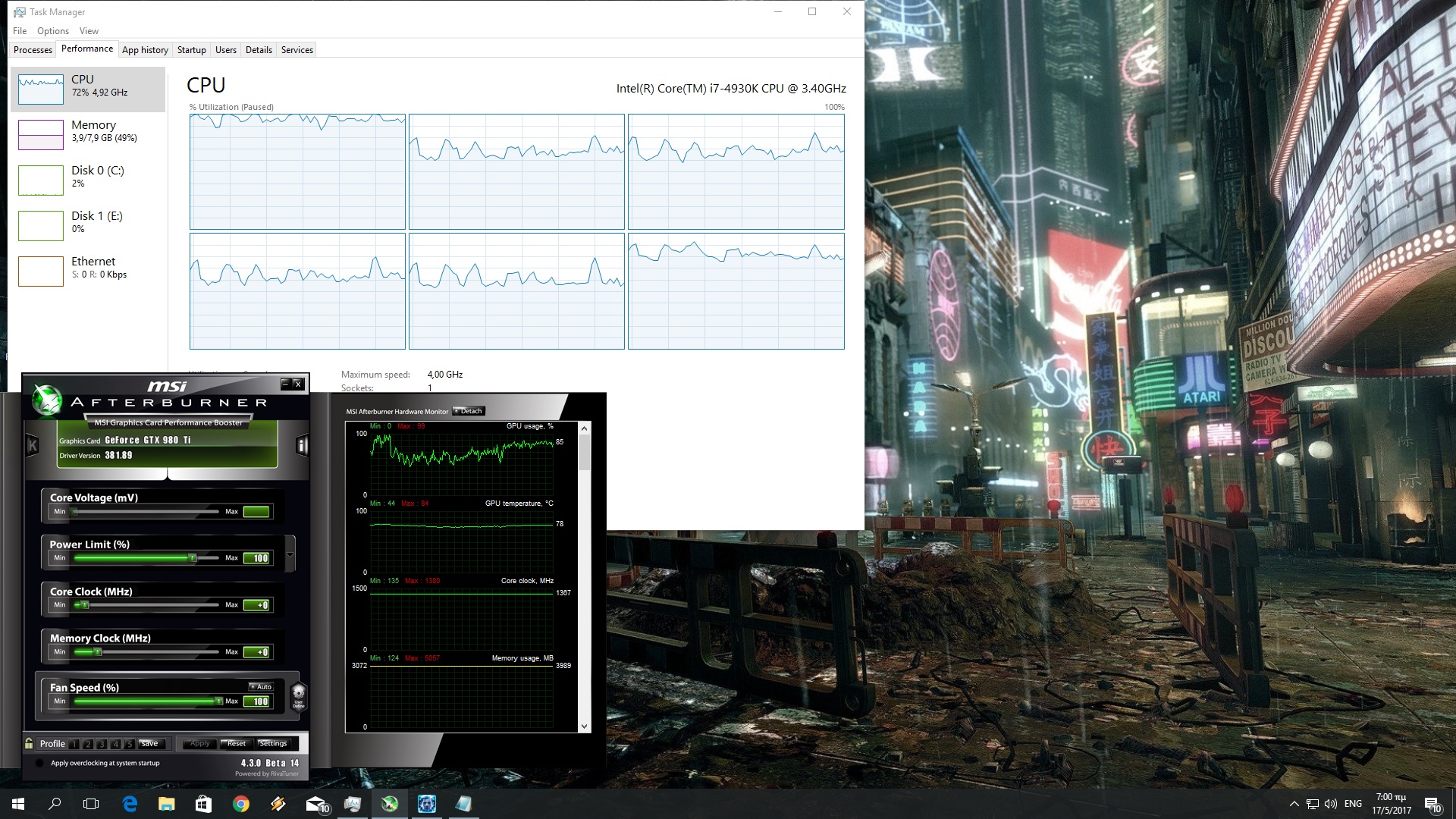 The Surge comes with a nice amount of graphics – and overall – settings. PC gamers will be able to adjust the quality of textures, shadows, volumetric lighting, motion blur, anti-aliasing and the intensity of lensflares. In addition, PC gamers can enable or disable Screen Space Reflections, Ambient Occlusion, Subsurface Scattering and Chroma Shift (this is the option for Chromatic Aberration, so disable it immediately).

Deck13 has offered a wealth amount of gameplay settings. Gamers can enable/disable options like auto lock-on, auto switch lock, camera bobbing and camera smoothing. At this point, we should note that camera smoothing is enabled by default, so be sure to head over to the gameplay options and disable it. 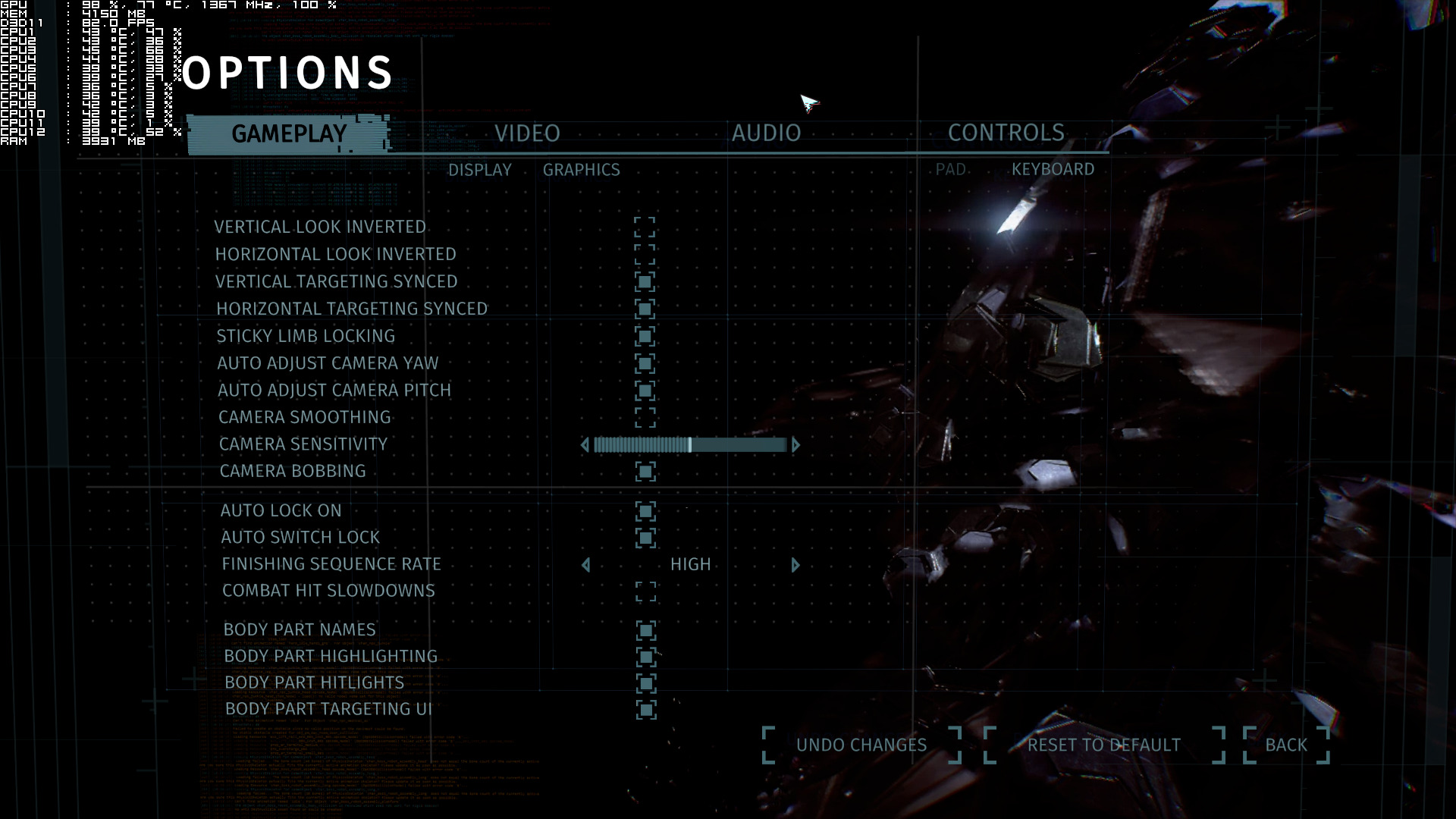 In order to find out how the game performs on a variety of CPUs, we simulated a dual-core and a quad-core CPU. The Surge was able to run smoothly even on our simulated dual-core system, and without Hyper Threading. While there are some differences in minimum framerates, all of our systems were able to offer a constant 60fps experience. 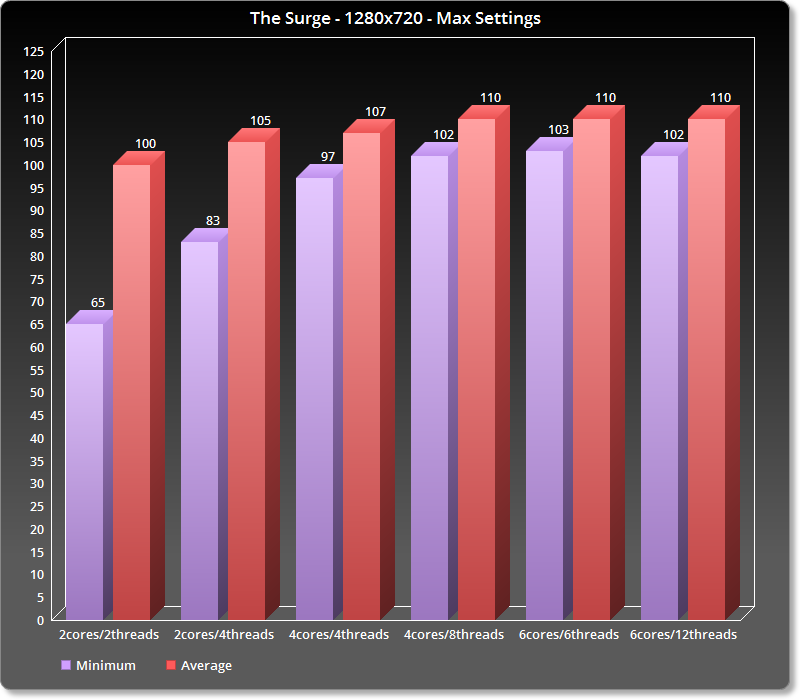 As such, The Surge can be mostly described as a GPU-bound title. Our GTX980Ti did not have any trouble running the game on Max settings at 1080p. On the other hand, and due to the lack of an SLI profile, our GTX690 was unable to offer a smooth experience. On Max settings, our GTX690 ran the game with a minimum of 26fps and an average of 36fps. In order to hit an almost stable 60fps experience, we had to lower our settings to the Low preset (which among other things decreases the internal resolution that is used, resulting in really awful visuals). So yeah, while the game can scale on older hardware, it looks really bad visually on them. 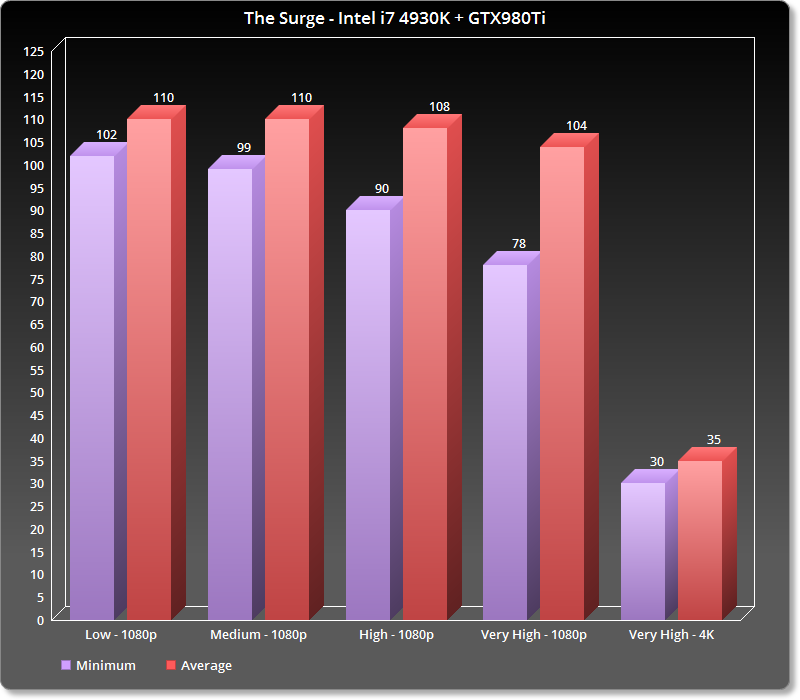 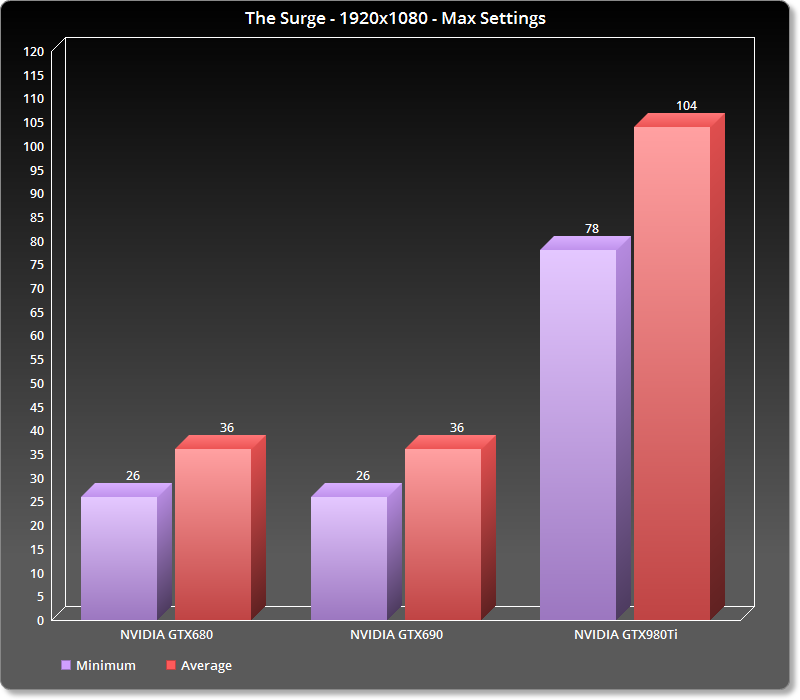 Similarly to PREY, The Surge suffers from noticeable tearing issues when VSync is disabled. Thankfully, and contrary to PREY, the in-game VSync option works wonderfully in The Surge. Not only that, but we did not notice any lag issues with that option enabled; an issue that affected in the past a respectable number of games.

The Surge is powered by the FLEDGE Engine and looks quite good, though it suffers from major aliasing issues. Deck13 has included two AA solutions (FXAA and SMAA) and none of them resolves the game’s aliasing issues. We strongly believe that a temporal AA solution (alongside a sharpening slider) would benefit this title.

As said, The Surge looks great (and since the game is inspired by the Dark Souls series, we should note that it looks way better than Dark Souls 3). The game features a respectable amount of light sources that cast shadows, has a pretty cool shadow LOD solution, features bendable vegetation, is using a large palette of colours, has some cool physics, as well as some lovely light shafts. 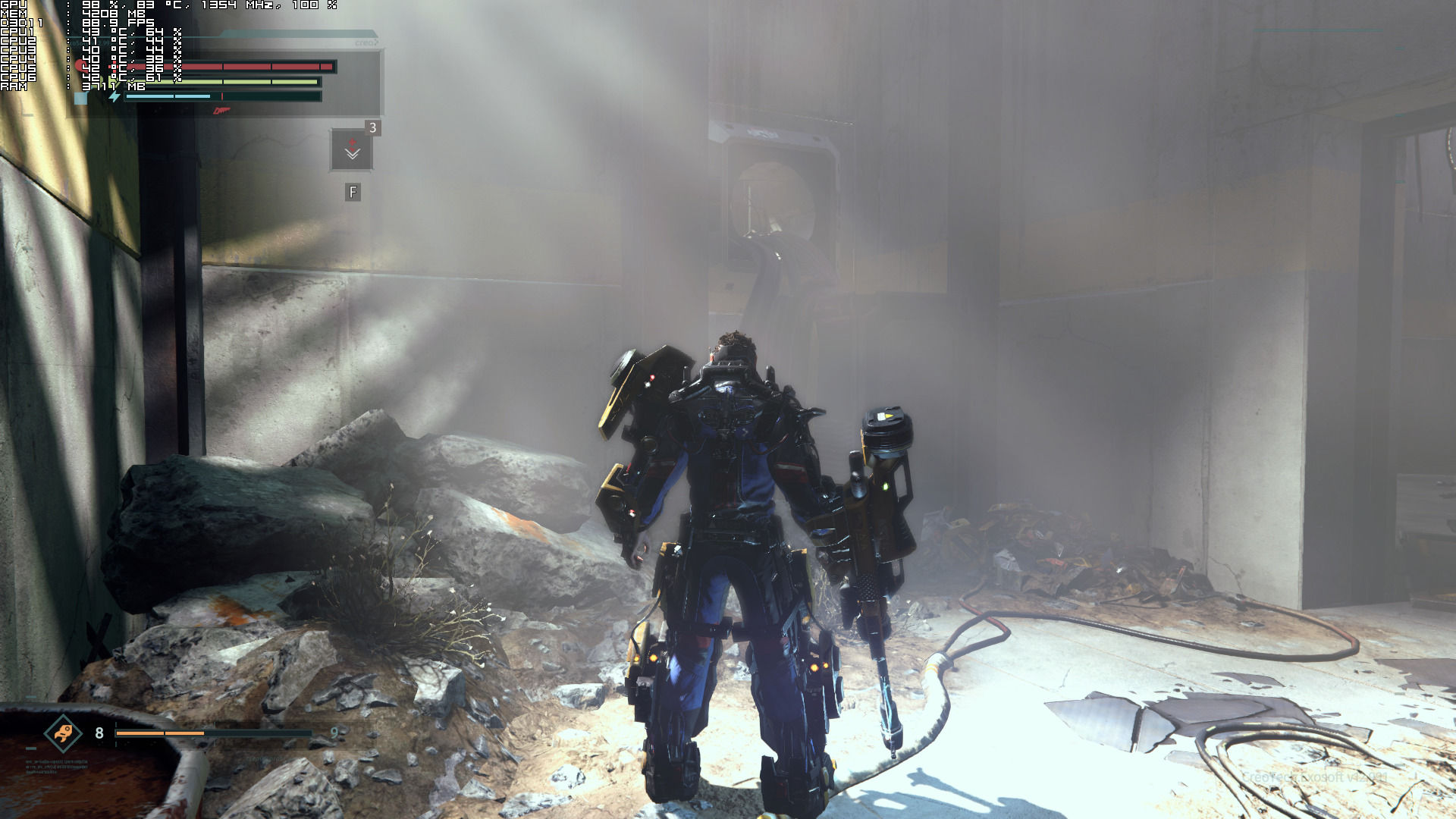 Now while the game looks great, it’s nowhere close to its pre-release bullshots or as good as other triple-A games like Gears of War 4. Its characters are not that detailed, and there are a lot of tech/visual shortcomings. So while the game is pleasing to the eye – and above average – it does not push the boundaries of the visuals/graphics in third-person games.

In conclusion, The Surge performs great on the PC platform. Deck13 has offered a nice amount of options to tweak, and the game runs wonderfully even on dual-core systems. The Surge comes with options to disable mouse smoothing and Chromatic Aberration, works wonderfully with the keyboard+mouse control scheme, offers proper on-screen keyboard indicators, and we did not experience any crash issues. If we are not nitpick, we’d like even more graphics options for individual effects so that the game could scale better on older GPUs. Apart from that, The Surge runs exceptionally well on the PC. 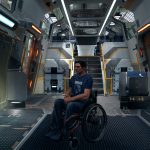 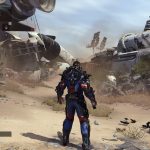 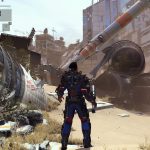 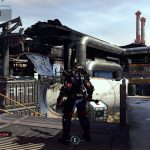 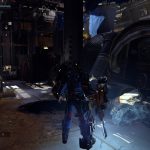 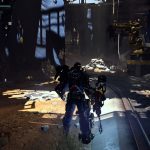 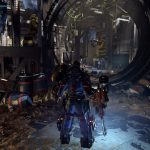 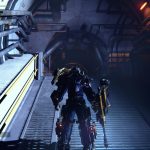 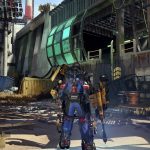 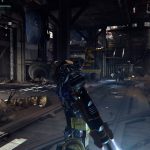 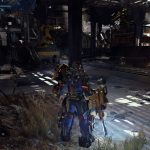