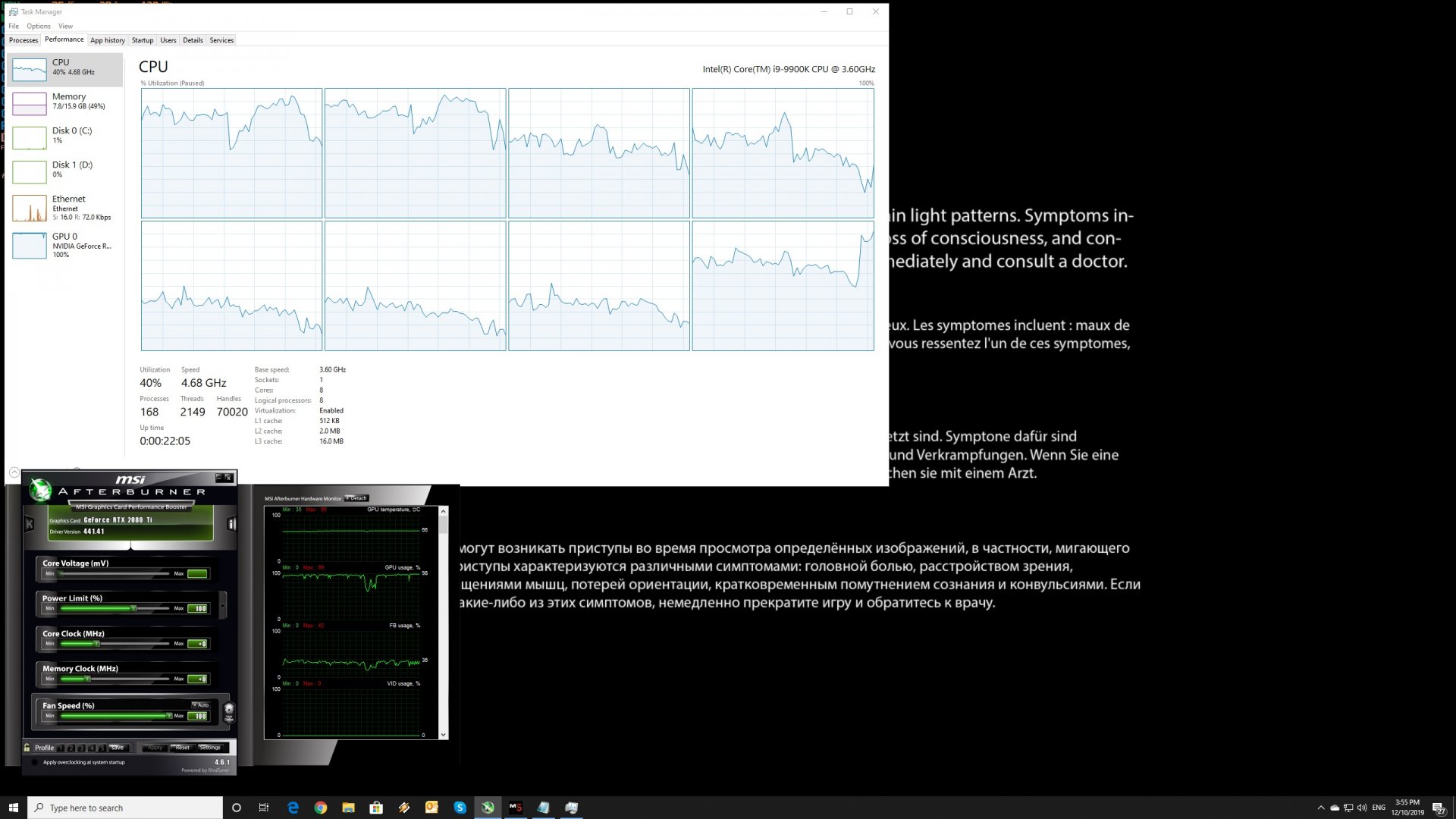 Piranha Games has added a respectable amount of graphics settings to tweak. PC gamers can adjust the quality of View Distance, Textures, Effects, Shadows, Foliage, Post-Processing and Anti-aliasing. There are also options for Anisotropic Filtering and Sharpening, as well as Field of View sliders. 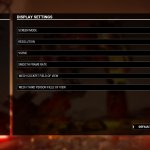 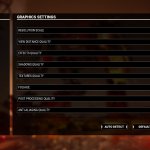 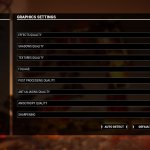 MechWarrior 5: Mercenaries does not come with a built-in benchmark tool. Therefore, we used the hangar area – which was the most GPU-heavy scene – for our GPU benchmarks. For our CPU tests, we used the first main mission.

Similarly to other recent games, MechWarrior 5: Mercenaries appears to be a GPU-bound title. In order to find out how the game scales on multiple CPU threads, we simulated a dual-core, a quad-core and a hexa-core CPU. And we are happy to report that even our simulated dual-core system was able to provide a 60fps experience at 1080p/Max settings. However, and despite pushing 60fps, there were some frame pacing issues on that particular system when Hyper Threading was disabled. With Hyper Threading enabled, the game was silky smooth. 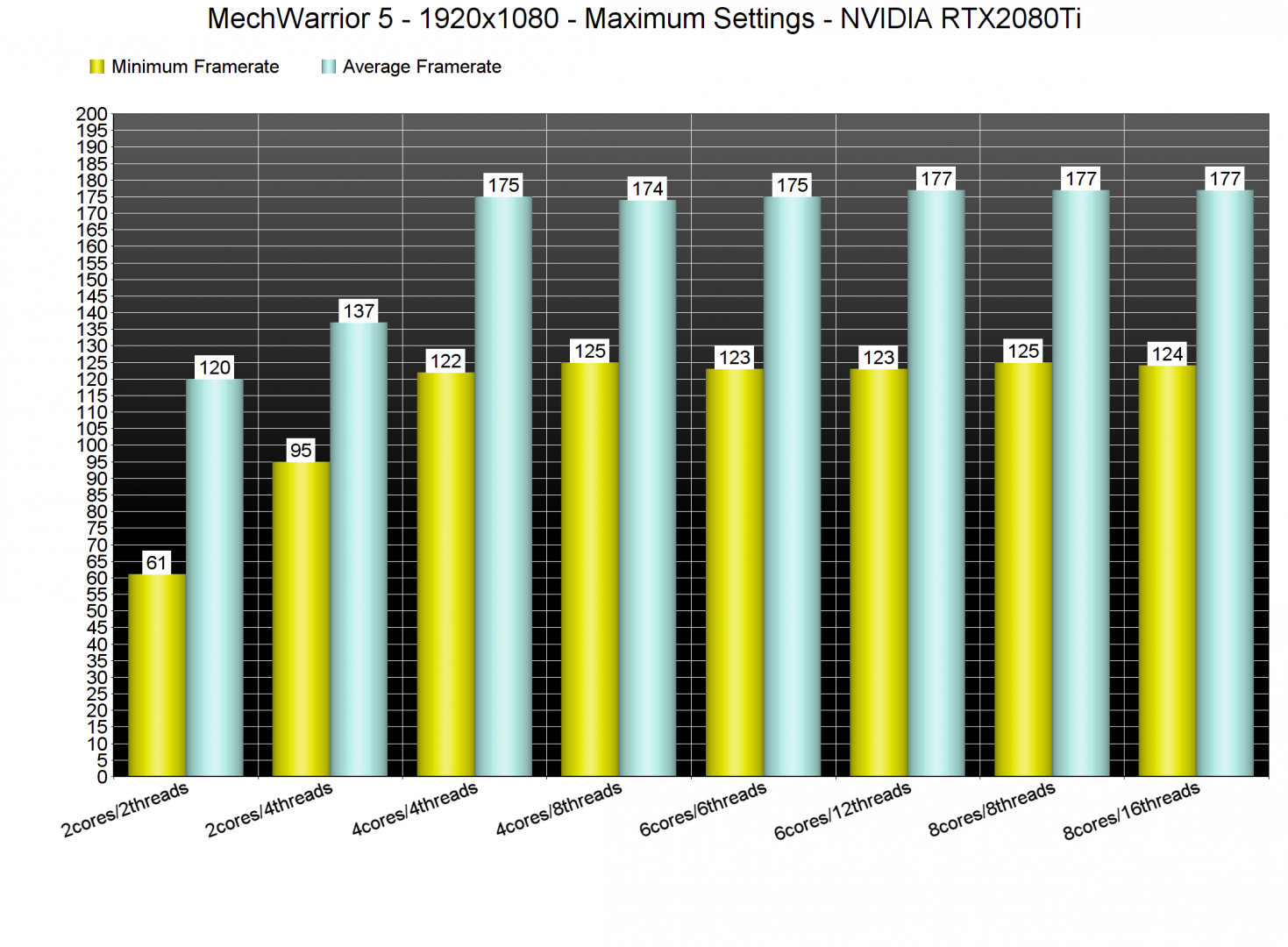 From the looks of it, MechWarrior 5: Mercenaries does not take advantage of more than four CPU cores/threads. On the other hand, the game appears to rely heavily on CPUs with better IPCs. As such, there were some noticeable performance differences between our i7 4930K and our i9 9900K. Still, even that older CPU was able to achieve a 60fps experience at both 1080p and 1440p. 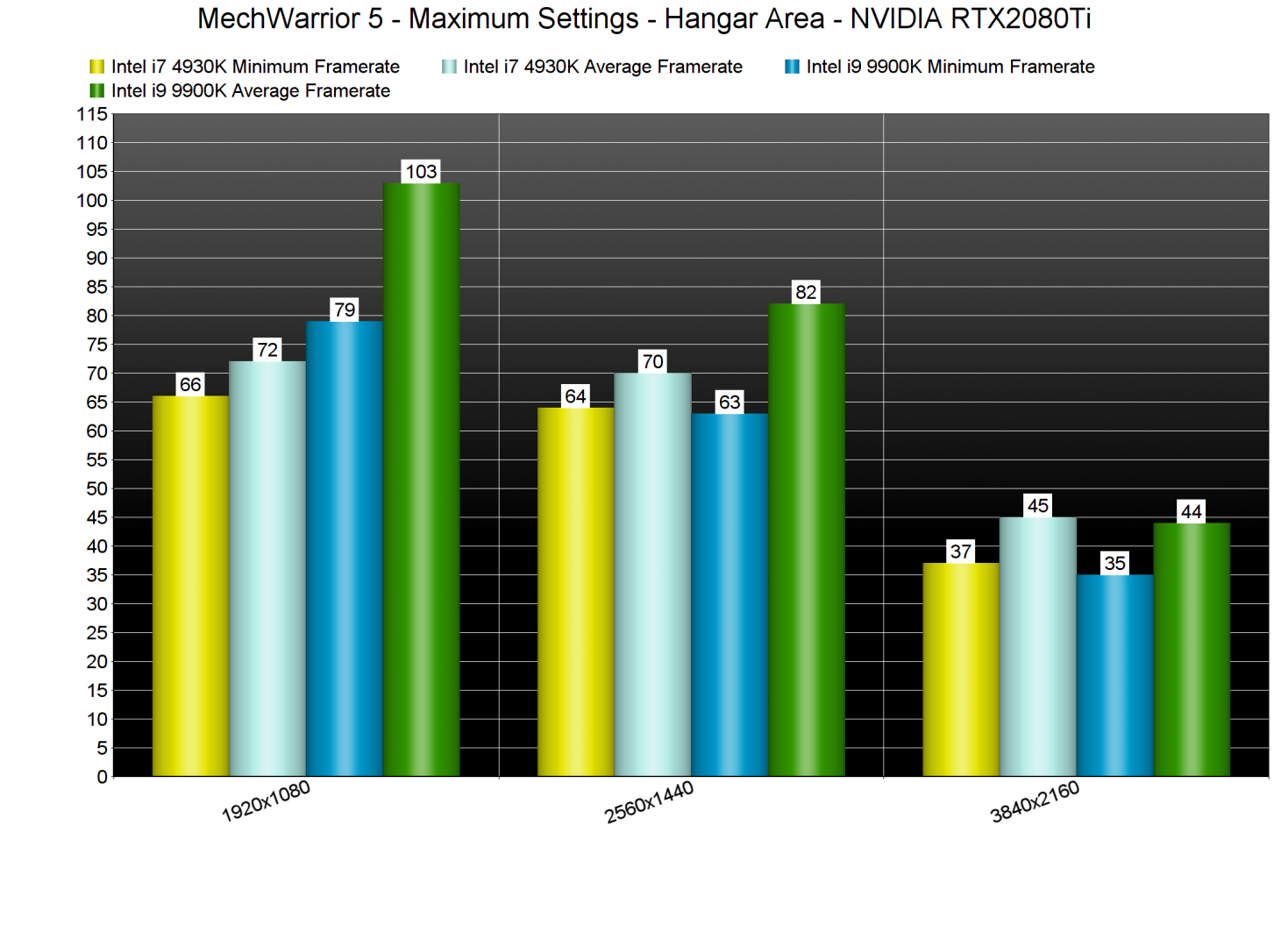 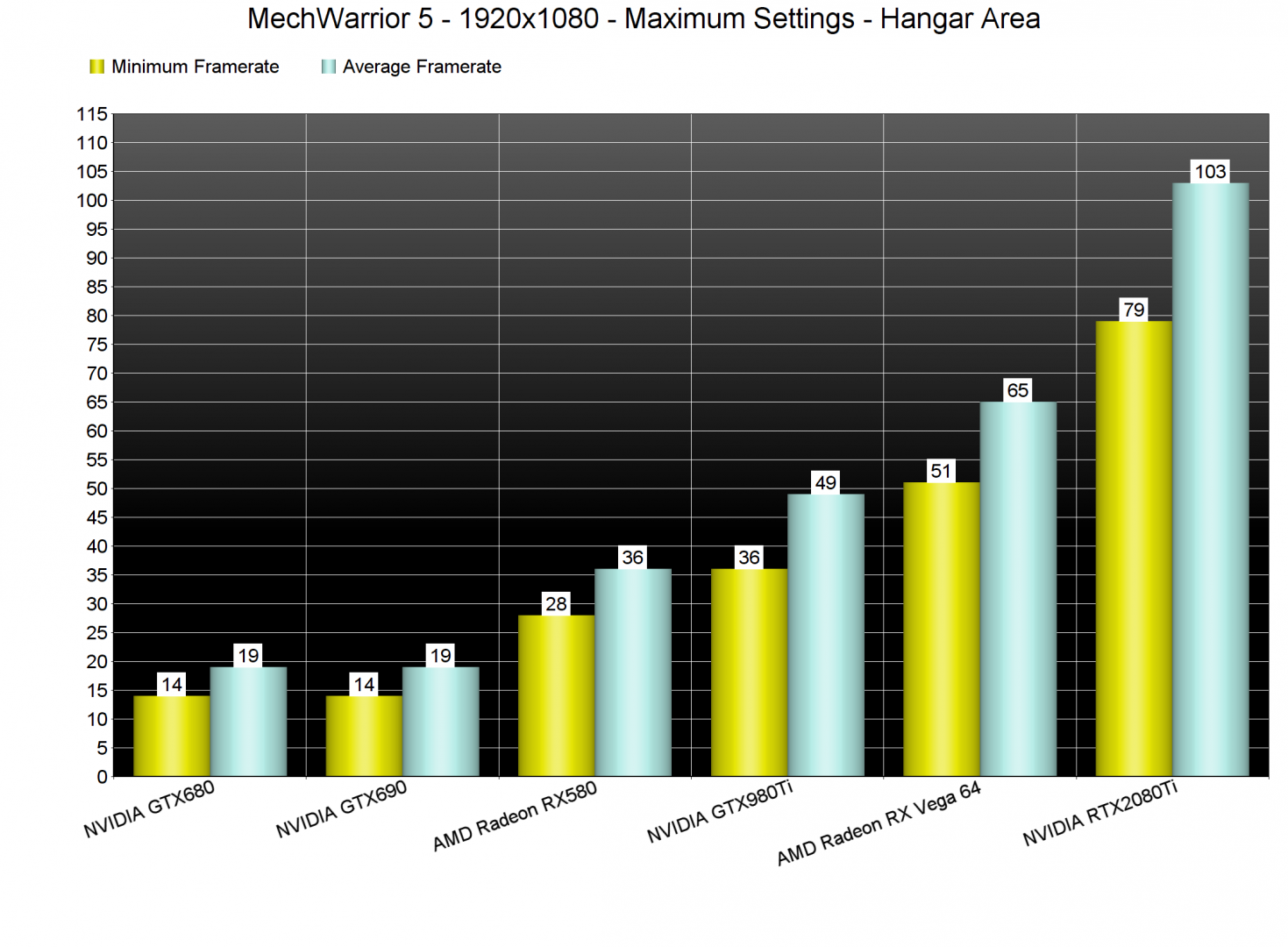 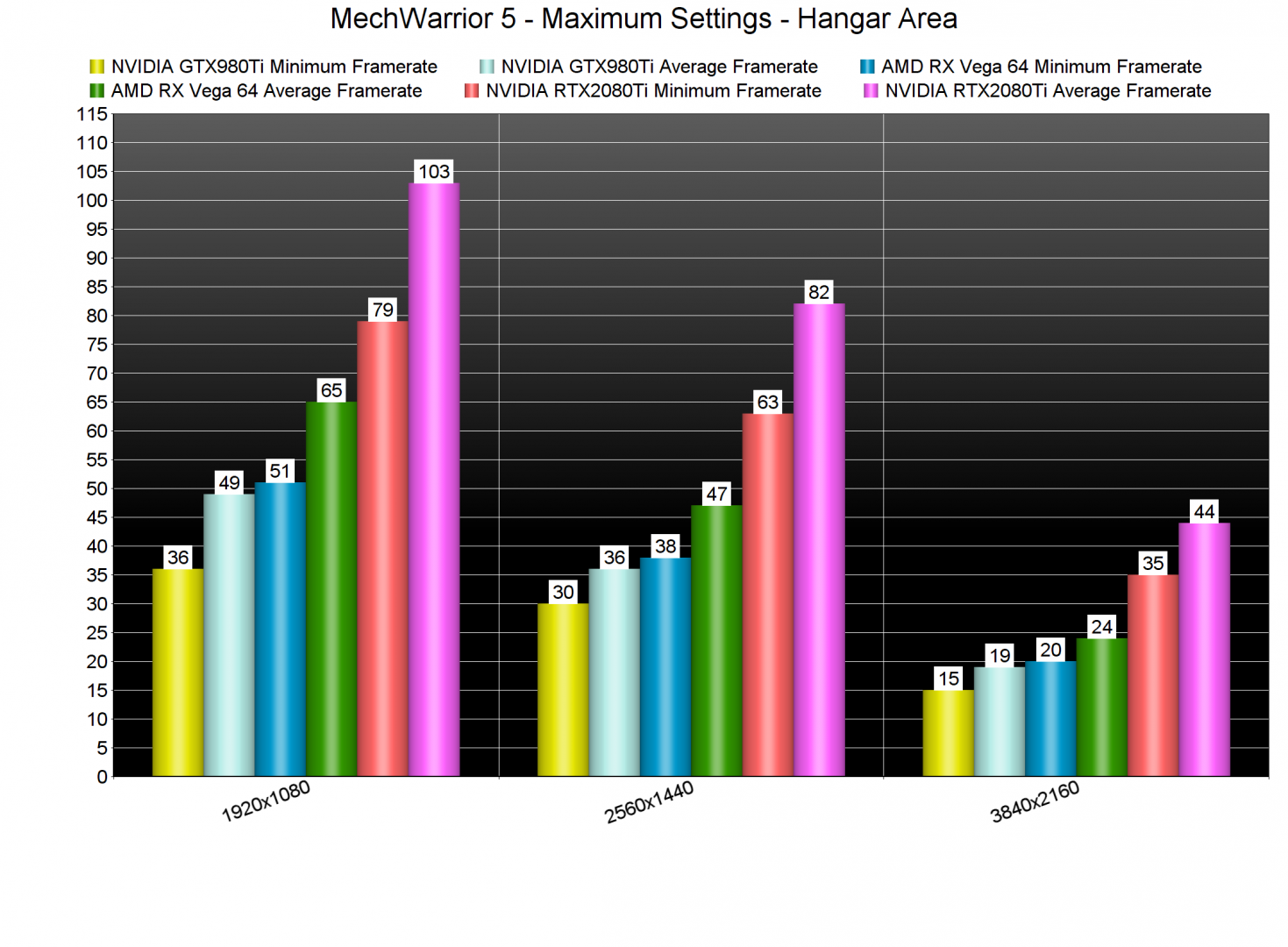 As said, for our GPU benchmarks we used one of the most GPU-heavy scenes in this game. Therefore, consider the following benchmarks as stress tests. Despite that, it appears that overall performance is inconsistent. Thus, some missions are more demanding than others. For instance, the Tutorial runs better than the hangar area, but not as great as the Snow levels. Now since the Tutorial appears to be somewhere between the worst and the best case scenarios, we went ahead and benchmarked that area too. 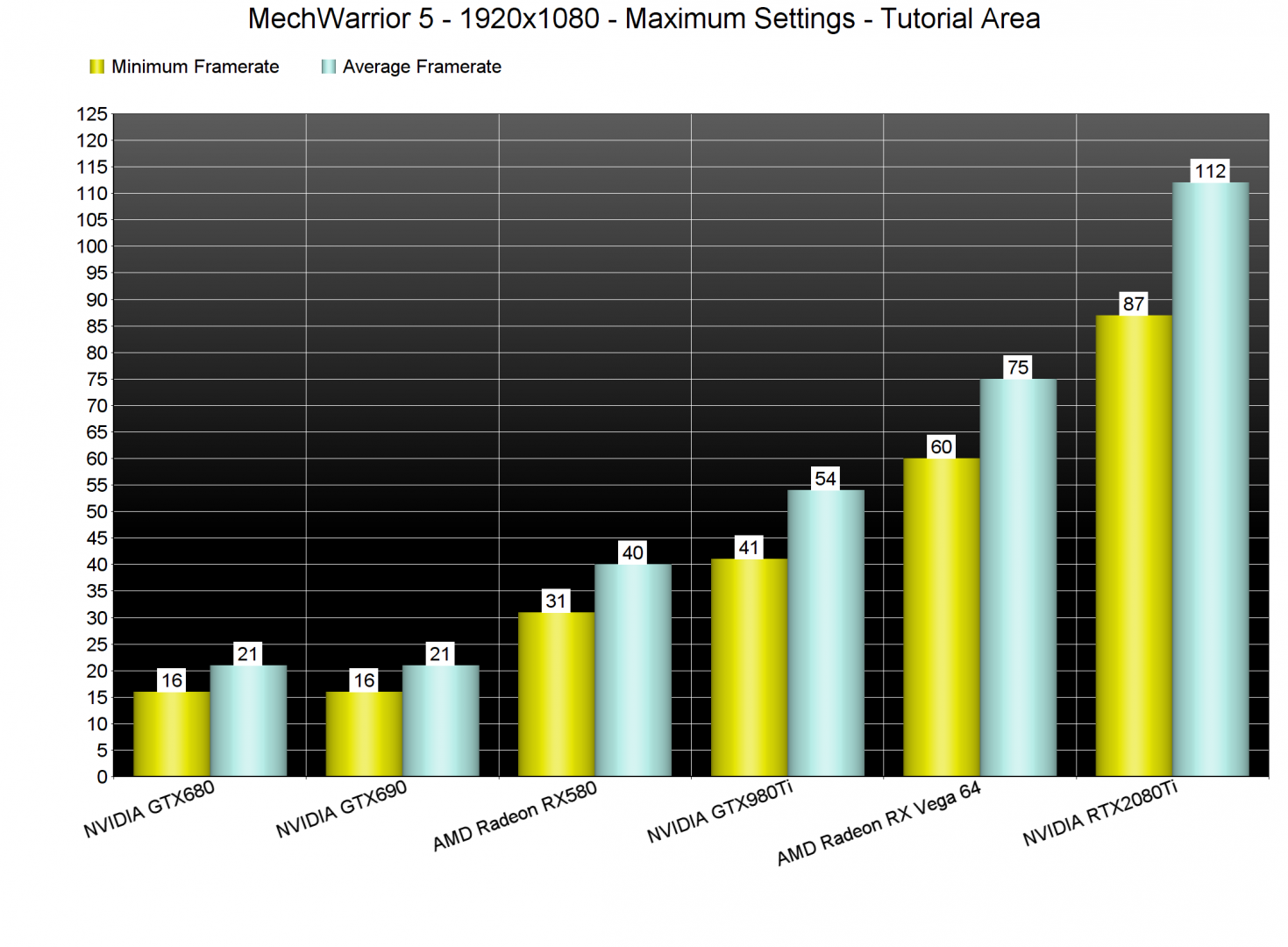 Graphics wise, MechWarrior 5: Mercenaries looks good and features a lovely (though limited) environmental destruction system. All the mechs look great, and there are some really cool looking areas. However, the game suffers from awful pop-ins, even on Max settings. This can be especially distracting when playing the main missions via the third-person viewpoint. The lighting is also not that advanced, especially in areas where there isn’t direct sunlight. Some animations are also kind of mediocre, especially during cut-scenes. For the most part, MechWarrior 5 looks fine. However, it does not push the boundaries of what PC games can look like in 2019.

All in all, MechWarrior 5: Mercenaries is a mixed bag. While the game does not require a high-end CPU, it has some missions that do not really justify its GPU requirements. Take for example the Tutorial area. That area performs similarly to all of Anthem’s maps; a game that looks significantly better than MechWarrior 5. Piranha Games will have to further optimize it via post-launch performance patches, otherwise numerous PC gamers may encounter performance issues in specific missions.