We were really caught off guard by Flying Wild Hog’s first-person shooter. Not only, it’s an old-school FPS that goes against the flow of modern-day’s games, but it’s also one of the most optimized titles we’ve ever played. Hard Reset is a truly PC game, in every possible way and takes advantage of both multicores and SLI/Crossfire. And let us tell you that the scaling is phenomenal. Normally, this would be the first part of our performance analysis – since we are playing a preview build, but Hard Reset is so polished and optimized that there is honestly no need for any other, future analysis.

As always, we used a Q9650 (@3.9Ghz) with 4GB DDR2, a GTX295, Windows 7-64Bit and ForceWare’s latest version. The good news is that the 280.19 ForceWare drivers have already an SLI profile for it, so you won’t have to mess with Nvidia’s Inspector Tool to enable it. We’ve also tested the game with our GTX295 in Single-GPU mode and with a simulated dualcore system, as well as with our Q9650 at default clocks. In all those different scenarios, the game ran fine at 1080p with Ultra Details, so there is no reason to worry; Hard Reset will run with a wide range of PC configurations. 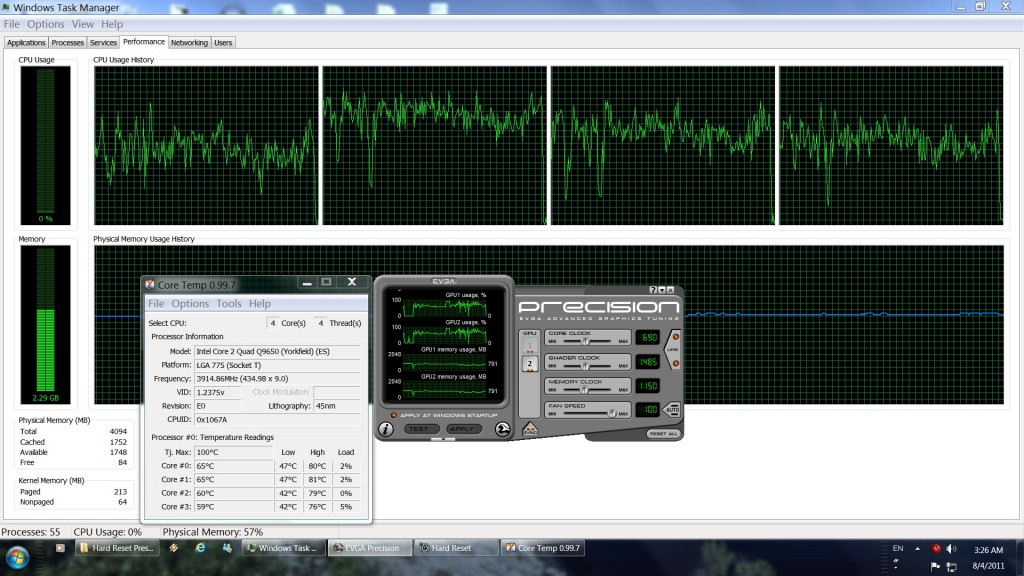 First things first though, let’s see how the game performs with various CPUs configurations. We started our analysis with our Q9650 at 3.9Ghz and didn’t notice any slowdowns at 1080p and with maxed out details. Since we wanted to see if there was any CPU limitation, we wanted to avoid any GPU limitation and in order to achieve this, we didn’t enable any kind of AA. Except for one scene, our overclocked Q9650 didn’t encounter any problem with Hard Reset. The game was running with constant 60fps so if you have a similar PC, you won’t
experience any frame drops.

CPU usage was around 80%, and Flying Wild Hog’s little gem was taking advantage of all four of our cores. When we tried to simulate a dualcore system, we notice a 20fps hit. We’ve seen titles that suffered from big performance hits when moving from a quadcore to a dualcore CPU, but nothing like that. Hard Reset needs a quadcore system to shine and is perhaps the title that most gamers will point to when they try to convince their ‘dualcore friends’ that it’s time to move to a better CPU. We’ve also tried the game with our Q9650 at default clocks and notice some slowdowns in some places. Of course, the framerate never dropped to bellow 40s but still, if you’re used to smooth gaming, you will immediately notice these slowdowns. And as always, the new architecture of i5/i7 is ideal for Hard Reset. 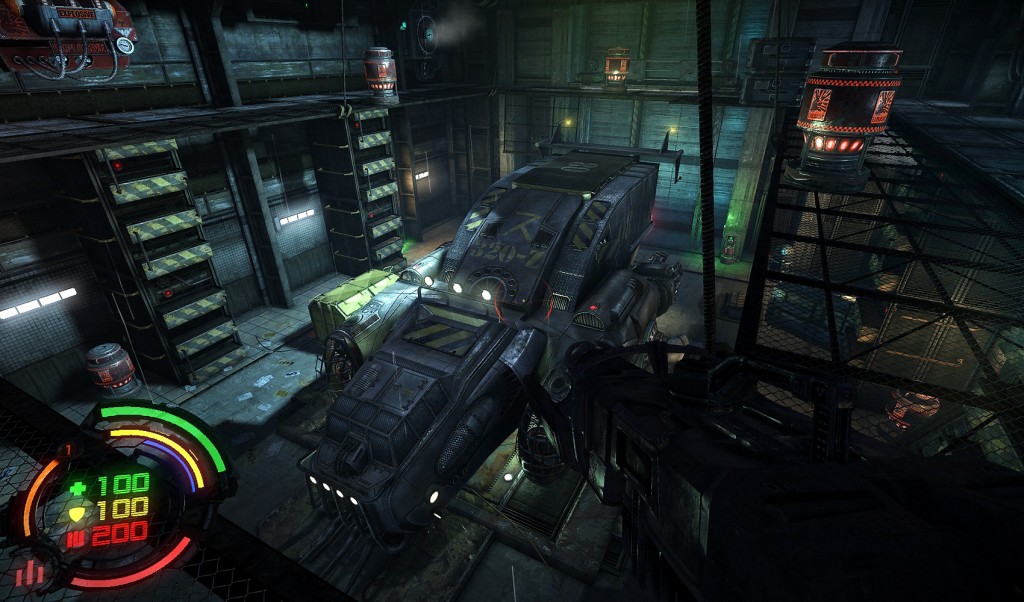 GPU requirements are quite low to be honest. With our GTX295 in Single-GPU mode we could run it at 1080p with Ultra settings. There weren’t any slowdowns, so those with weaker GPUs will be able to enjoy this old school shooter. With our GTX295 in SLI, we could enable MLAA and stay above 60fps at all times. And we should also note that the SLI scaling is amazing in this game. It’s really refreshing seeing a PC game with proper SLI profile and incredible scaling that hasn’t been released yet. So kudos to both Flying Wild Hog and Nvidia!

So, Hard Reset runs great with modern-day’s PC configurations but how does it look? Well, it could have been better – as this is a PC exclusive game – but still, it is better than most of first-person shooters that are currently available. Now don’t misunderstand us, this doesn’t mean that it doesn’t look gorgeous, or that it is average. It’s a great looker but as this is a PC exclusive game, we kind of expected even better graphics. What stroke us at first though were the high-resolution textures, and it was a nice change to witness such crisp surfaces in a vanilla game. Both interactivity and destructibility are great and will sometimes remind you of all the PhysX titles. Moreover, Flying Wild Hog used pump mapping cleverly to display holes at walls, similar to what Monolith did with FEAR. Most light sources cast shadows, although our main character doesn’t have a shadow or an actual body. Lamps and lights can be deactivated by shooting at them, though can’t get destroyed and the lighting/HDR effects are of high quality. There were some places where our jaw dropped to the floor with the gorgeous lighting effects so make no mistake, Hard Reset looks F’ing amazing. 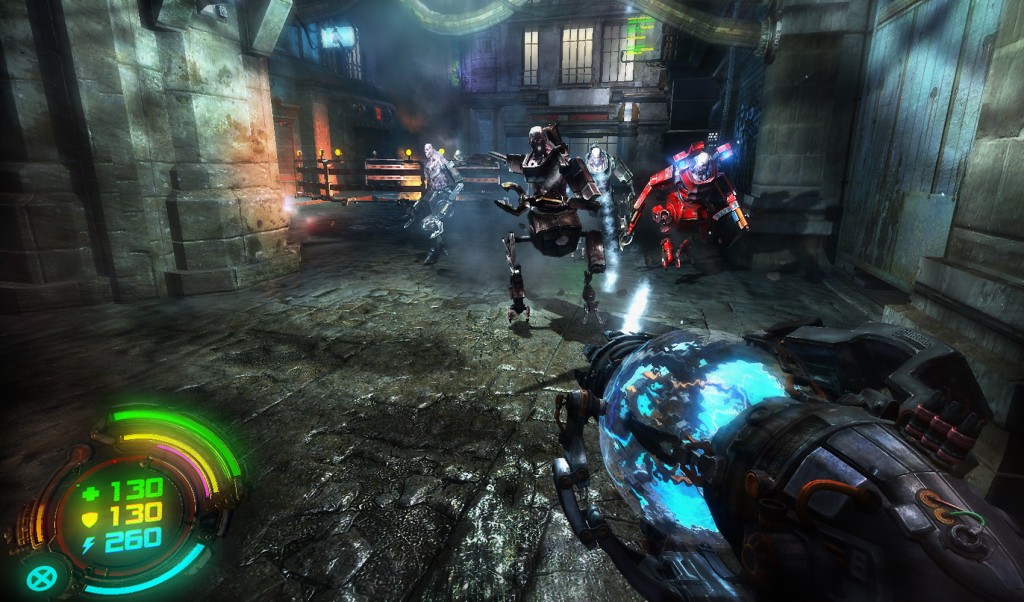 All in all, Hard Reset sports some incredible visuals but still, we’d expect Flying Wild Hog to push the graphical boundaries even more. We are pretty sure that the company can easily port the game to consoles by lowering the game’s – and textures’ – resolution, limiting destructibility, interactivity and framerate and using an aggressive LOD system. Now we don’t know if console gamers would welcome such an old-school shooter but by using such clever techniques, Hard Reset could easily run on current-generation consoles.

Contrary to our other PC performance analyses, we don’t have any new screenshots to share with you. There was an NDA with the preview build so we couldn’t capture any in-game screenies. So for now, enjoy the official screenshots that the company provided us with! 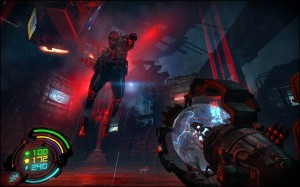 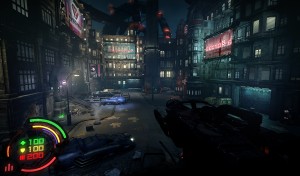 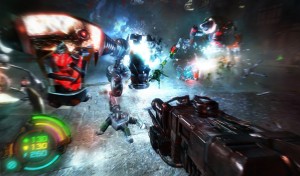 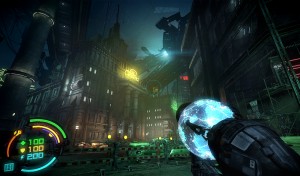 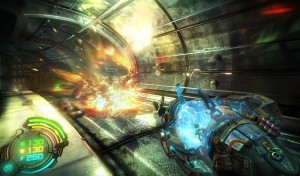 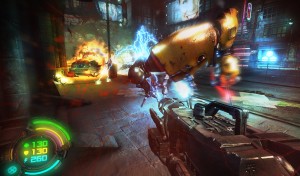 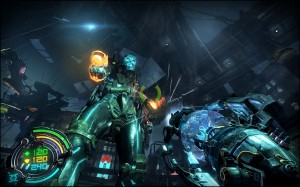 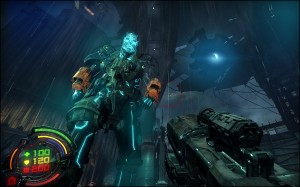 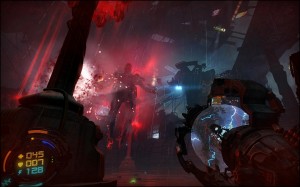 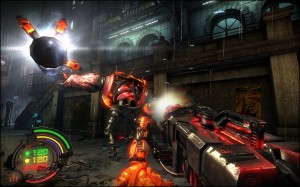 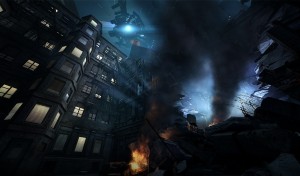 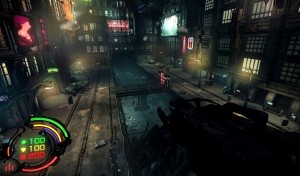