Assassin’s Creed Odyssey is one of the most highly anticipated games of 2018. Powered by AnvilNext, this new Assassin’s Creed game aims to transport you to ancient Greece. The game releases in a couple of days so it’s time to benchmark it and see how it performs on the PC platform. 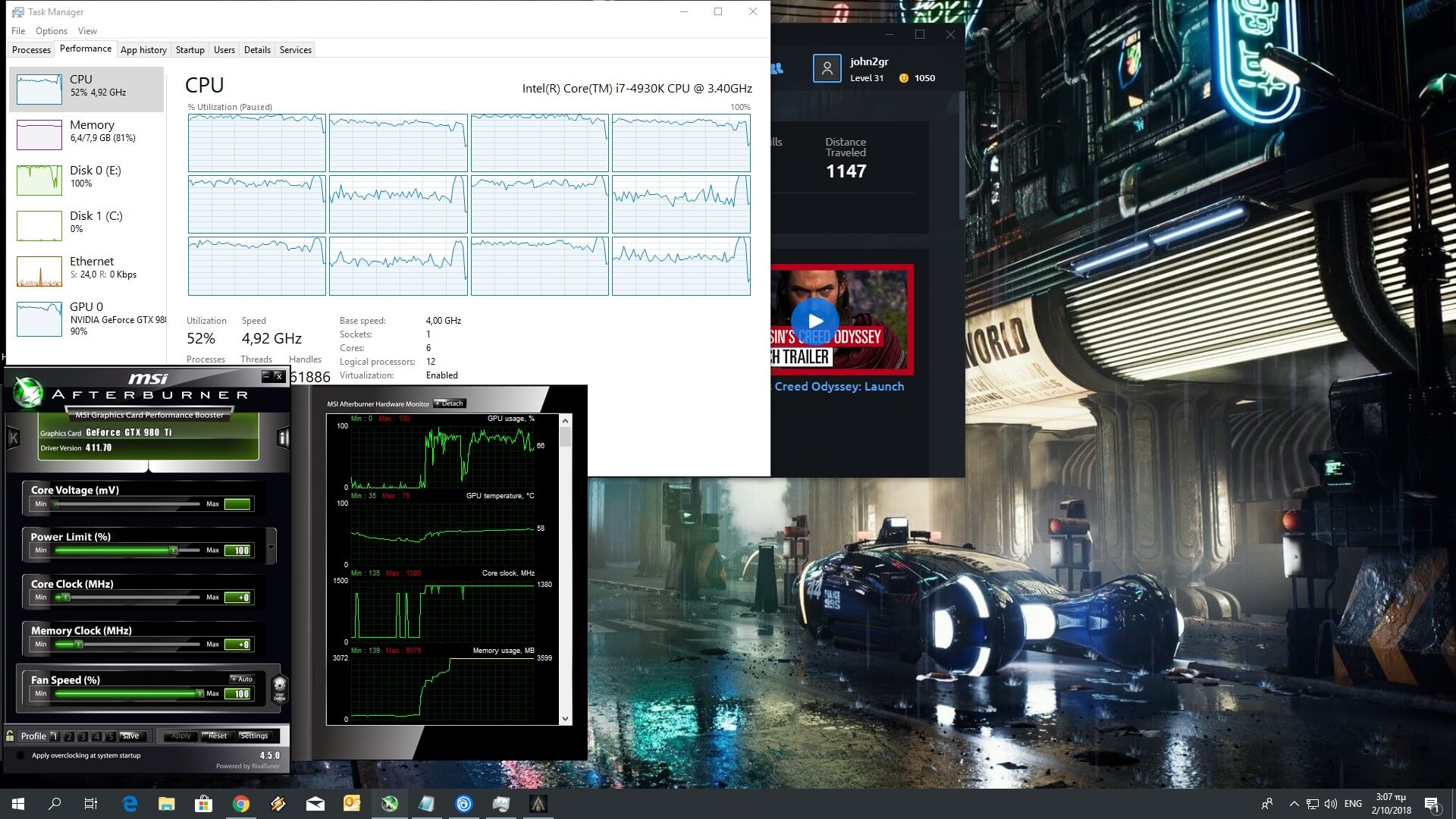 Similarly to Assassin’s Creed Origins, Ubisoft has added a wide range of graphics settings in Assassin’s Creed Odyssey. PC gamers can adjust the quality of Anti-Aliasing, Environment Details, Textures, Terrain, Clutter, Fog, Water, Screen Space Reflections, Volumetric Clouds, Character Detail, Ambient Occlusion and Depth of Field. There are also options for Field of View, Resolution Scaling, FPS limiter, HDR and FreeSync 2. Unfortunately, though, the small description that accompanies each and every option does not clarify whether it affects the CPU, the GPU or both of them.

Before continuing, let’s address the underwhelming AMD Radeon RX Vega 64 performance on our system (because I’m sure that most of you have already viewed the graphs). As we’ve said numerous times, AMD’s DX11 drivers come with a huge CPU overhead, resulting in awful performance on CPU-limited games. In this particular title, the NVIDIA GeForce GTX980Ti can actually offer a way better overall performance – on systems that are CPU-limited – than the more powerful Radeon RX Vega 64. The only way to overcome this issue is by overclocking the CPU (when we overclocked our i7 4930K to 4.3Ghz we saw a 5fps boost on the RX Vega 64, which basically proves our point) or by using a newer CPU. Now I know that most of you will say that we should upgrade our system – we actually do plan to build a new i9 9900K system – however you must realize that NVIDIA’s hardware on the exact same system performs way, way better. There is no magic sauce here, AMD simply needs to step up its DX11 game. And… well… here is an example of why we should not give AMD a pass.

Let’s assume that after the release of the RTX2080Ti, NVIDIA decides to gimp its previous generation graphics cards with its latest drivers. In case something like that happens, should we call out NVIDIA or should we suck it up and upgrade to a newer GPU? Obviously most of you will agree with the former. Well, the exact same thing is happening right now with AMD’s DX11 drivers. The DX11 drivers are awful and all of these driver issues vanish the moment developers properly use DX12 and Vulkan. We’ve seen this in games like Shadow of the Tomb Raider and Forza Horizon 4 in which the Radeon RX Vega 64 performs ideally on our system. So yes, it’s inexcusable that AMD has not improved its DX11 drivers at all these months/years. It’s also inexcusable for Ubisoft to be using DX11 in its open-world games as DX12 or Vulkan would really benefit them.

In order to find out how the game performs on a variety of CPUs, we simulated a dual-core and a quad-core CPU. We also used the in-game benchmark tool as it features a worst case scenario. Without Hyper Threading, our simulated dual-core was unable to run the game due to severe stutters. With Hyper Threading enabled, our simulated dual-core was able to push a minimum of 31fps and an average of 38fps, though we did notice some stutters and framepacing issues. What really surprised us, though, was the performance improvements we noticed with Hyper Threading on both our hexa-core and our simulated quad-core systems. Assassin’s Creed Odyssey is one of the few games that benefits from more than six CPU threads. Do note that in Alexandria in Assasin’s Creed Origins we could never achieve the same performance and were severely CPU-limited, even on NVIDIA’s hardware. So yeah, it appears that Ubisoft has optimized the AnvilNext Engine so it can better scale on multiple CPU cores/threads. 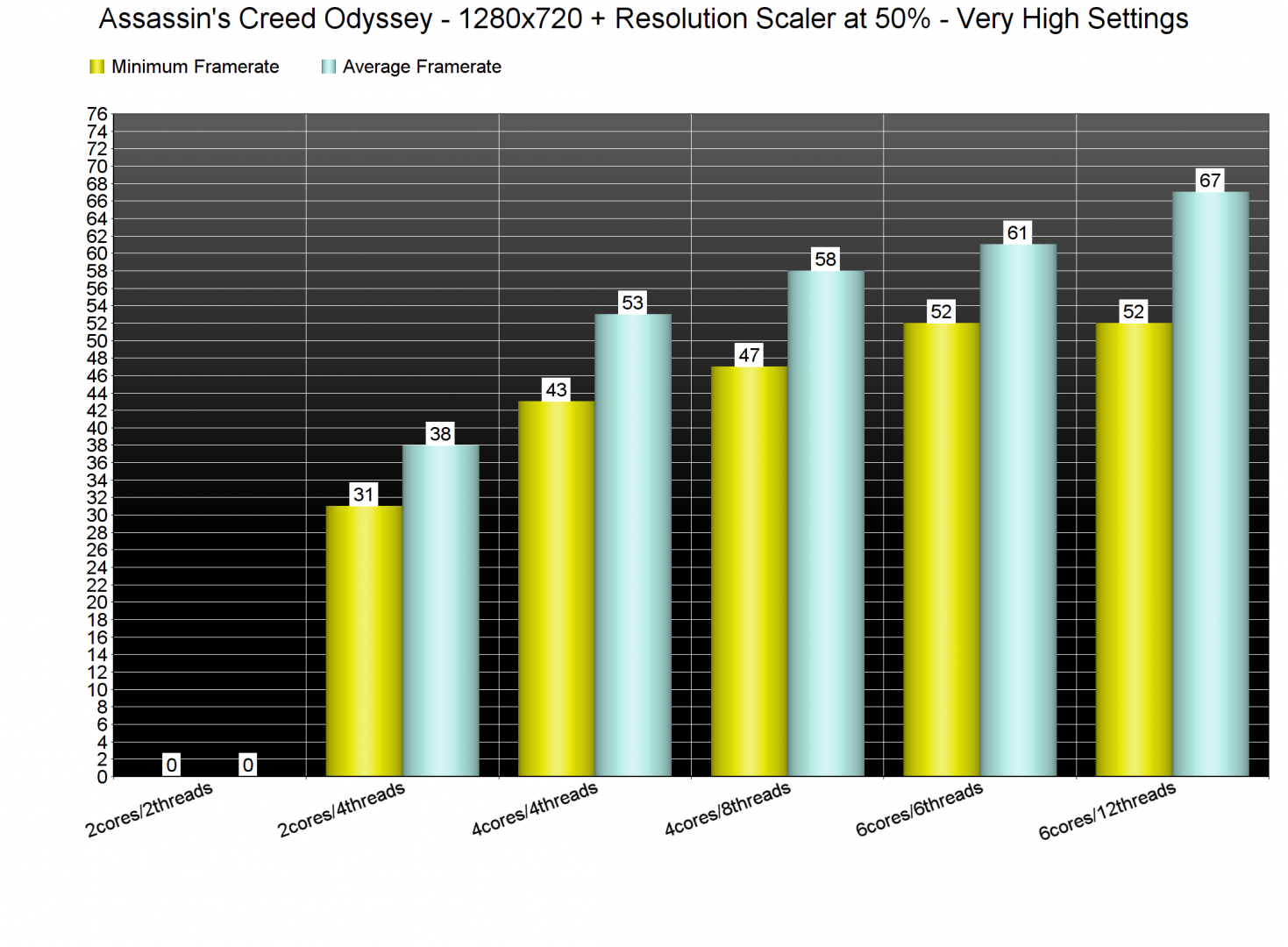 Contrary to Assassin’s Creed Origins, though, Assassin’s Creed Odyssey requires more powerful GPUs. At 1080p on Very High settings, our GTX980Ti was able to offer a minimum of 38fps and an average of 53fps, whereas the AMD Radeon RX580 was able to push 33fps/42fps and the AMD Radeon RX Vega 64 offered – due to the aforementioned enormous DX11 driver CPU overhead – 40fps/48fps. 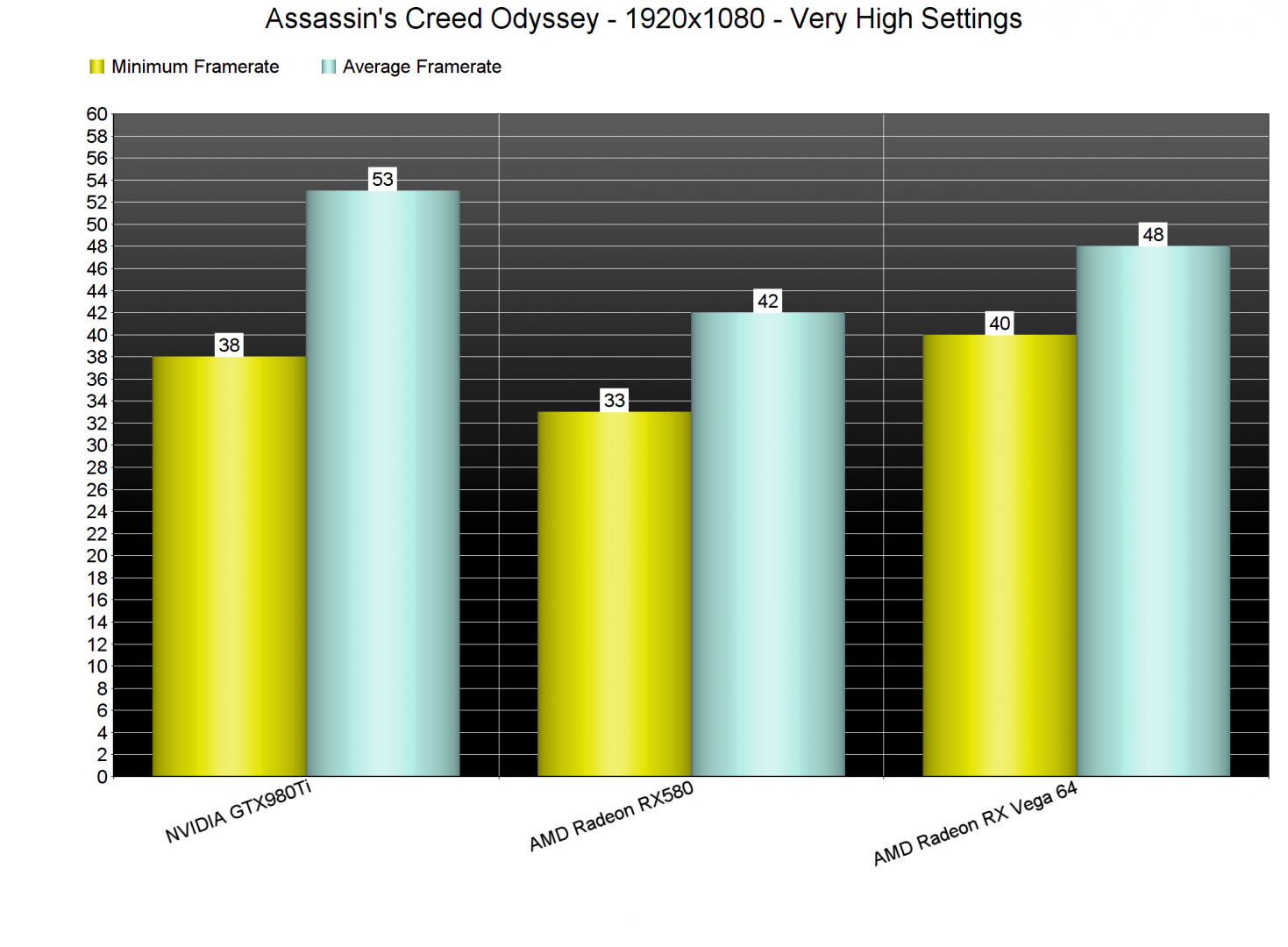 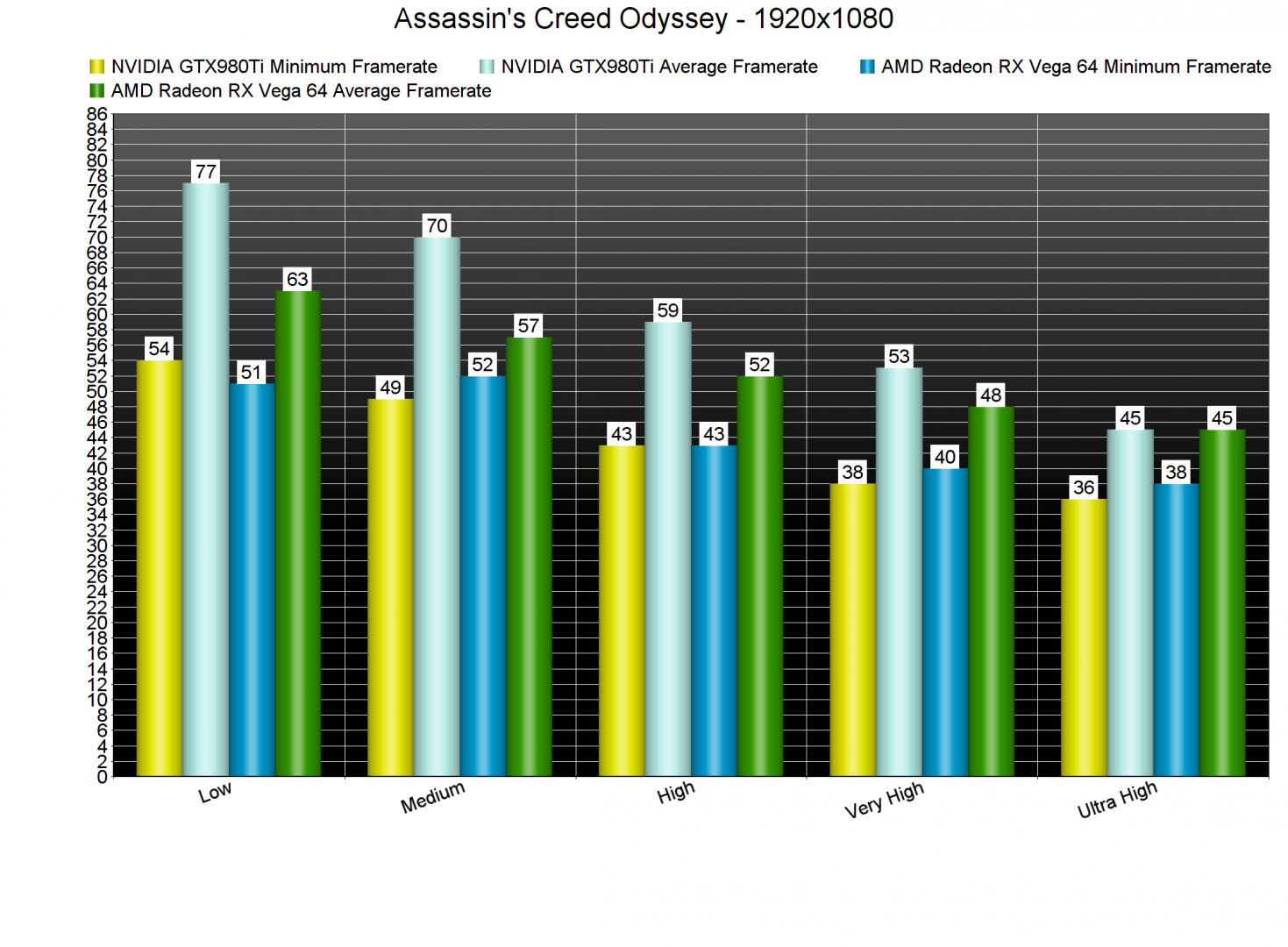 But what about those gaming at higher resolutions than 1080p? Well, get ready to drop a lot of graphics settings. Unfortunately EVGA has not shipped our RTX2080Ti yet, so we could not test it (though we’ll be sure to test it in a separate article once we get it on our hands). At 2560×1440 on Very High settings, our GTX980Ti was able to push a minimum of 35fps and an average of 43fps. On the other hand, our Radeon RX Vega 64 was able to surpass the GTX980Ti but it’s obvious that we were still CPU-limited. As for 4K, only the Radeon RX Vega 64 was able to offer a 30fps “console” experience. 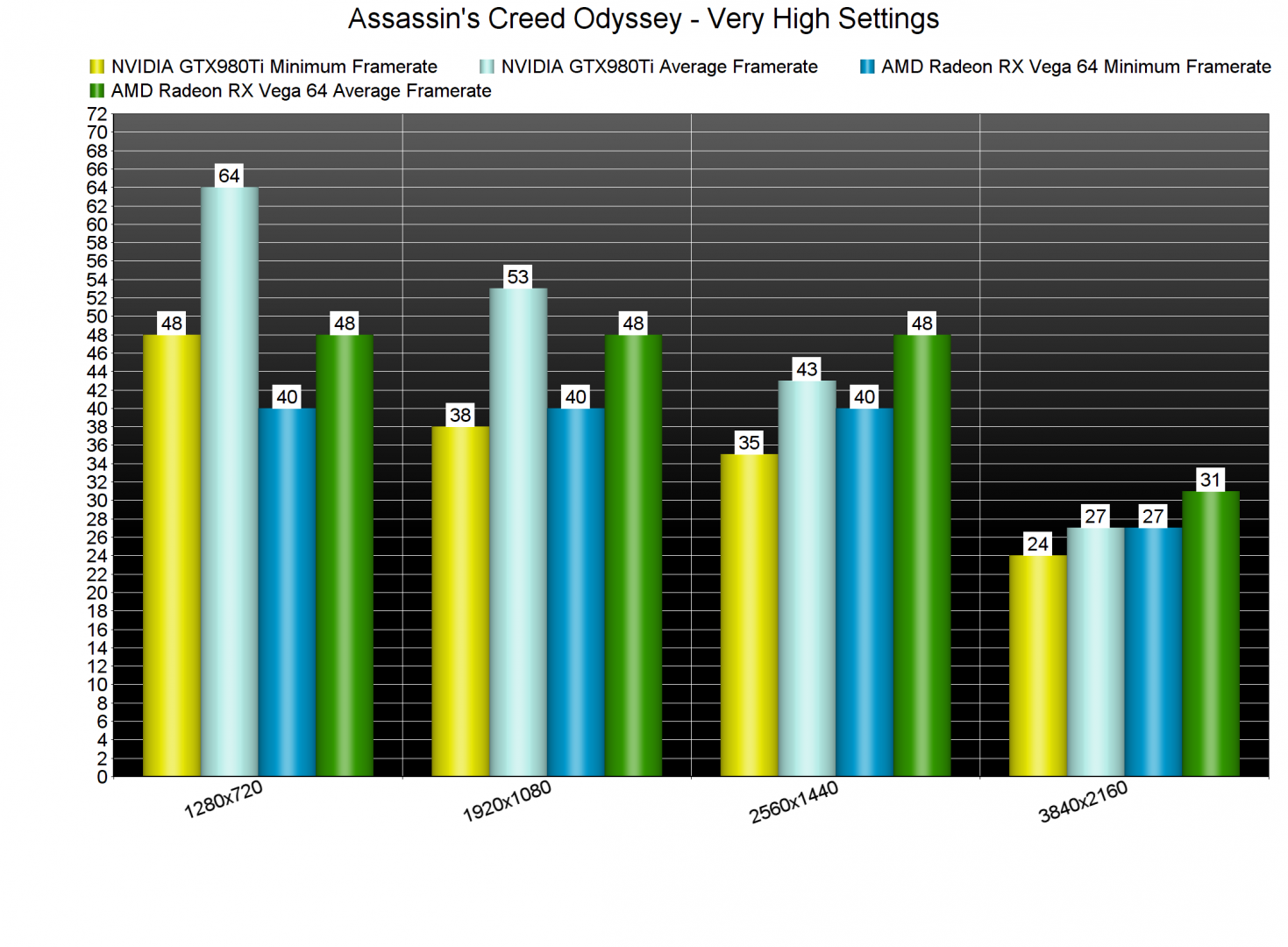 Graphics wise, I wasn’t really blown away by what I saw in Assassin’s Creed Odyssey. I mean, the characters look amazing and the environments look great, but there was something off. Since I also played Unity recently, I can definitely say that the lighting took a big hit. Apart from its awful pop-in issues, Unity remains one of the best looking AC games to date and does not need any Reshade in order to get the best out of it. Yeap, Odyssey desperately needs Reshade as it looks a bit blurry for my taste. Origins saw a tremendous visual improvement with Reshade, and I’m pretty sure that the same can happen with Odyssey. Also, don’t get me wrong; this does not mean that Assassin’s Creed Odyssey is not a great looking game. However, it does not really justify its ridiculously high GPU requirements in cities, especially when other titles look and run better.

All in all, Assassin’s Creed Odyssey is a mixed bag. Ubisoft has definitely made some improvements to the game engine, resulting in better CPU utilization. And while the game uses the Denuvo anti-tamper tech, we did not experience any annoying stutters – like those in Origins – or framepacing issues. Even at 50fps, and mainly thanks to its great framepacing, the game felt smooth. However, Odyssey requires more powerful GPUs than its predecessor, especially when you are wandering around its big cities. The problem here is that the game does not appear to be as gorgeous in cities as Unity, and it runs significantly slower than it. Also, Ubisoft is still stuck at DX11 and we believe that DX12 or Vulkan would benefit tremendously all of its open-world games (provided they are properly implemented like in Shadow of the Tomb Raider). So yeah, as I said it’s a mixed bag. For those that were previously CPU-limited, the game will run better than Origins and for those that were GPU-limited, it will run slower.