Building upon the daring visual design and gratifying first-person fisticuffs of the acclaimed original, Zeno Clash II is bigger, bolder, and better in every way. Zenozoik comes alive like never before, an open world waiting to be explored, one rendered with breathtaking splendor. As Ghat, players can fully and freely explore every natural and architectural wonder his world has to offer. In addition to most of the characters, enemies, and items from the first game-all of which return with dramatic visual enhancement-Ghat can also expect to encounter awe-inspiring new sights, jaw-dropping new creature designs, and wildly creative new weapons and items.

Beyond visuals, Zeno Clash II also dares to refine and add to its predecessor’s gameplay foundation for success. The game’s heralded first-person brawling mechanics are further refined, improving on the integral enemy “Lock-on” function as well as giving the player pinpoint control over where their strikes land. New RPG elements allow players to gain more strength, master defense, or improve in other areas in order to give Ghat and his companion Rimat a better chance of survival.

Lastly, and perhaps of the greatest excitement, the entire game can be experienced with drop-in/drop-out online cooperative multiplayer. Ghat can now be joined by his sister Rimat in battling past the angry denizens bent on stopping them from accomplishing their goal.

“The world of Zenozoik is one of wild dreams and wilder nightmares. This is part of the reason we are working on Zeno Clash II, to give players the opportunity to explore Zenozoik with a friend via online cooperative multiplayer, turning those moments of wonder and awe into a shared adventure. We will make certain that going back and forth between solo and cooperative play preserves the consistency and impact of the narrative experience, while still allowing friends easily drop in and out of the game’s fulfilling exploration and visceral melee combat.” 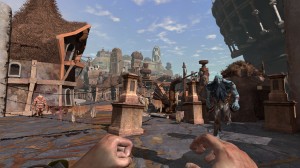 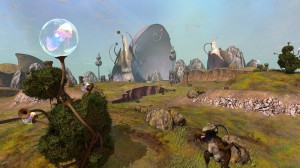 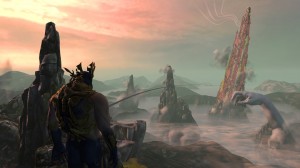