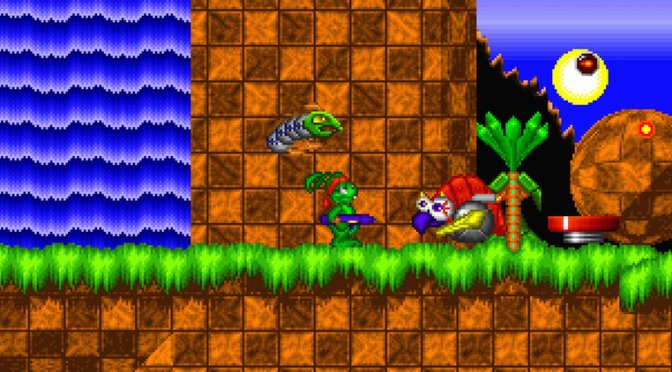 Violet_CLM has released a new version of the Jazz Jackrabbit vs Sonic mashup, Sonic with a Gun. This new version lets you play this fan game on your browser for free, right now. All levels, secret levels, enemies, etc. are available in this version, just as if you’d downloaded the mod locally. However, your save files will not persist across play sessions.

Sonic With A Gun alters Epic Megagames’ 1994 Jazz Jackrabbit primarily in the style of SEGA’s Sonic the Hedgehog. The game also uses elements from other Sonic games, such as Sonic 2 (G/MD), Sonic 1 (SMS/GG) and Sonic 4. You can also find elements from Sonic CD, Sonic Advance 3, Sonic Mars, and some other Sonic games.

SWAG encompasses six main planets/zones, each with graphics, level layouts, enemies, and other obstacles unlike anything before seen in Jazz 1 modding, in an elaborate celebration of the Jazz engine and the Sonic series.

Two prominent differences between the gameplay of Sonic and Jazz are that the former can run up walls, ceilings, etc., and the latter has a gun and disposes of enemies with it rather than by jumping on them. These differences remain in SWAG, which features the standard ammunition types from Jazz 1. Perhaps the best way to think about this mod is as Jazz visiting the equivalents of the Sonic zones but in the Jazz Jackrabbit universe.

You can go ahead and play Sonic with a Gun from here.