Ubisoft today announced the Watch Dogs Limited Edition Pack for North America. Along with the game itself, included in the Limited Edition Pack are a collectible SteelBook case featuring art from DedSec, the official soundtrack, including the original score from composer Brian Reitzell (Lost in Translation, The Bling Ring, Hannibal), an 80-page hardcover art book, Aiden Pearce’s mask and a 9-inch statue of Aiden in action. 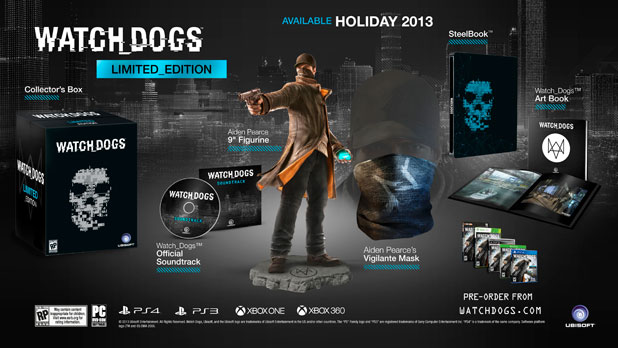 In Watch Dogs, players will assume the role of Aiden Pearce, a new type of vigilante who, with the help of his smartphone, will use his ability to hack into Chicago’s central operating system (ctOS) and control almost every element of the city. Aiden will be able to tap into the city’s omnipresent security cameras, download personal information to locate a target, control systems such as traffic lights or public transportation to stop a chase, and more. The city of Chicago is now the ultimate weapon.

Watch Dogs is currently scheduled for a November 22nd release on PC, X360 and PS3. The game will also hit next-gen consoles at a later date. Those interested can pre-order this Limited Edition for the first three platforms right now (no news about a European version as of yet).