This means that Valve may attend E3, but won’t bring their toys with them, and that there won’t be any new announcements about their products or games (at least from them, their partners may slip or leak some new information about Steambox or HL3). 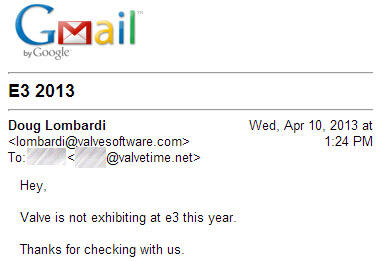 E3 2013 seems to be in big trouble right now. Nintendo won’t be holding a press conference and Valve won’t be exhibiting. Naturally, this may be a false alarm as it is almost guaranteed that we’ll be getting more information about next-gen consoles.

Moreover, there is a high chance that most, if not all multi-platform titles, will be showcased on the PC. That was a common thing back in E3 2012, so it may very well happen again.

So let’s just sit back and relax for a second. After all, good things may come out of nowhere. However, it is almost certain that HL3 have no reason to get excited about this event.