Size Five Games, the minds behind controversial Sex Ed Shoot-‘em-Up “Privates” and hit point-and-click adventures “Ben There, Dan That!” and “Time Gentlemen, Please!” have announced their next project: The Swindle.

“The Swindle is a Steampunk physics-based platformer that plays a little bit like Deus Ex mixed with Sonic the Hedgehog. I wanted to make something no one’s done before, and I’m pretty sure this fits the bill…

It’s up to you how you want to upgrade your kit and play – you can stealth your way in, or go all guns blazing. There’ll be various routes, weapons, tactics and special abilities, all realised in a uniquely stylised 2D cartoon setting.”

Players will be charged with infiltrating various facilities and hacking computers to steal money, before making their escape. All that glorious cash can then be spent on upgrading equipment, giving you access to new areas where you can nick even more goodies.

The Swindle is definitely coming to PC and possibly to Xbox 360. 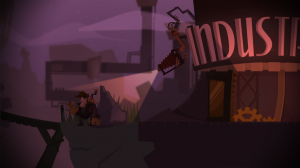