The Dark Triad: Dragon’s Death promises to feature a deep history with unexpected twists and many secrets to uncover, brutal and bloody turn-based combats with a brand new system where you define the degree of action & strategy and the speed of battles, 4 different classes, a brand new skills & specialty system, as well as hundreds of quests & side quests, with non-boring intriguing dialogues.

The Dark Triad: Dragon’s Death will also offer a vast map for you to enjoy during tens of hours, an incredible host of enemies for you to slash & crush, pets and Sacred Guardians to assist you in the heat of the battle, fully detailed characters and environments in 3D, items system with thousands of combinations and unique artifacts, and more than 5000 achievements.

The game is planned for release on PC and X360, though no release date has been given as of yet. The team also plans to launch a Kickstarter campaign for it at a later date.

Enjoy some early screenshots from it – as well as its intro video. 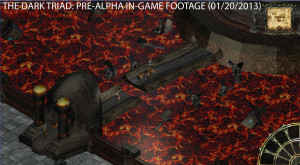