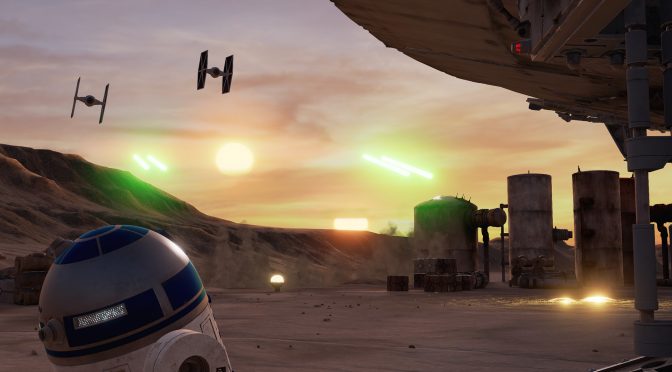 ILMxLAB has just released the first Star Wars VR game on Steam. Trials on Tatooine is a free game that everyone can download right now from Steam, and supports the HTC Vive headset.

In Trials on Tatooine, players will wield a lightsaber as they leap into action in the most immersive Star Wars virtual reality experience ever.

Players will be able to repair the iconic Millennium Falcon, and defend the plucky droid hero R2-D2 from incoming stormtroopers in this captivating experience set after the events of Return of the Jedi.

“Trials on Tatooine uses a single controller. We support both 5.1 surround and headphone audio, pick the setting with the icon on the intro screen for your configuration.

Trials on Tatooine approaches photo-realistic quality and requires a powerful computer. The quality setting on the left of the introduction screen should default to the correct setting for your system. If you drop frames try setting the quality knob one lower. In general, a minimum spec computer will run on the lowest setting while a fast computer with an Nvidia Titan X GPU will run on the highest setting. Trials on Tatooine also supports SLI and will automatically render on two GPU’s if available.”

Heere are the game’s PC requirements: