Great news for Star Trek fans as Namco Bandai has announced that Star Trek: The Video Game will be released worldwide on April 26th. The producers and development team of Star Trek: The Video Game worked closely with the entire creative team responsible for the re-imagined 2009 blockbuster Star Trek film to ensure what players see will look and feel remarkably authentic. In addition, the company has released two new screenshots that can be viewed below.

“One of the great joys of video games is the opportunity to take audiences to places that are only hinted at in traditional film and TV projects. Giving gamers the opportunity to explore the U.S.S. Enterprise is one of the more exciting aspects of our video game and one that we can’t wait to share with Star Trek fans and gamers worldwide.”

Playing as Kirk and Spock, gamers must face-off against the villainous Gorn – the formidable enemy first introduced in the classic 1967 Star Trek television episode “Arena.” Their battles will take them into familiar locations, like the bridge, transporter room and the engine room – but also deep into many areas of the ship that have never been seen on film before, including the Enterprise’s turbolift shafts, observation lounge, engineering decks and officer’s quarters.

“The Enterprise is not just a ship – she is one of the most important characters in all of Star Trek. Our goal from day one was to make sure that the Enterprise looks, feels and even sounds as true to life as anything players have ever seen. Hopefully, players will come away feeling as if they’re ready to be part of the crew themselves!” 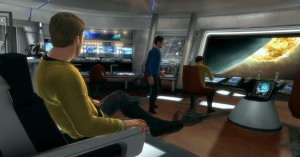 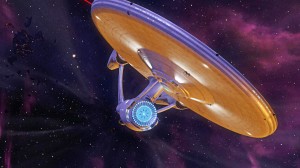