Yesterday, we informed you about Platinum Games’ interest in both Darksiders’ IP and Vigil Games’ former employees. Well, it seems that Platinum is not the only studio interested in those guys, as Sony Santa Monica has also expressed its interest towards them.

Spotted by NeoGAF, Sony Santa Monica is currently hiring and is definitely interested to Vigil Games’ employees. According to one of the tweets, Sony Santa Monica believes that the team of Vigil was really talented and that Darksiders was a great and epic game. 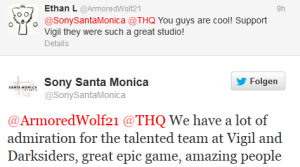 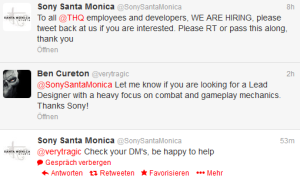 The bad news here – for PC gamers – is that Sony Santa Monica has been releasing games exclusively to Sony’s platforms. Sony Santa Monica is behind the God of War series, as well as PlayStation All-Stars Battle Royale.

Question now is whether Sony Santa Monica will be able to acquire the rights of the Darksiders IP. That will be a bold move, though we don’t think that they’ll be able to. But let’s assume for a second that they do so… will Darksiders 3 be their first multiplatform title or not? And if they don’t acquire the game’s right, what will happen to it after Vigil’s developers scatter to other studios?