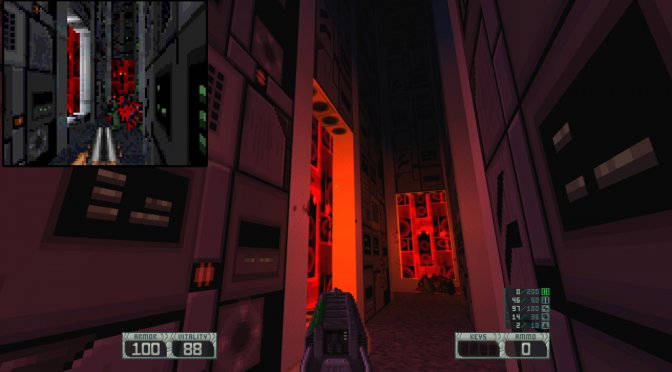 Doom and Alien Breed fans, here is something really special for you today. ArcturusDeluxe has released a remake of Alien Breed 3D in GZDoom as a standalone game. This project looks absolutely retro-cool, and we highly recommend downloading it.

Project Osiris features all of the 16 maps that were in Alien Breed 3D. While the maps are almost identical to the original versions, they have additional monsters, tweaked item placement and even some extra shortcuts and surprises.

Furthermore, Project Osiris features new textures and visual effects. It also has dynamic lighting and some areas of the maps now have coloured lighting.

Not only that, but the game features a new HUD. This HUD now fits into a familiar Doom status bar format, or a fullscreen HUD if you prefer it this way.

This Alien Breed 3D Remake also packs all 5 weapons from the original game, including new redrawn graphics and visual effects. It also has all the original aliens. Many of them now have diagonal angle views and some now have death animations.

You can download this Alien Breed 3D Remake for GZDoom from here. As said, this is a standalone game, meaning that you don’t need anything else to run it.

Lastly, and in order to showcase how faithful to the original game Project Osiris is, the modder has also shared the following comparison screenshots.

Have fun and kudos to our reader durka durka for bringing this to our attention!