Hi-Rez Studios released today two new screenshots for their brand new game where gods from various mythologies fight for supremacy in action-packed multiplayer battles, within beautiful environments powered by Unreal Engine 3. And we have to admit that it does look great. Oh… and there isn’t any brown-ish post process effect. Hurray!

In other news, Hi-Rez Studios announced that both Tribes: Ascend and SMITE will be playable at this year’s GamesCom.

SMITE will be free-to-play and is obviously inspired by DOTA. No release date has been announced as of yet. 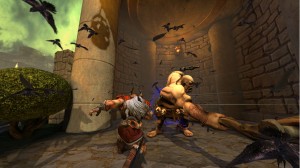