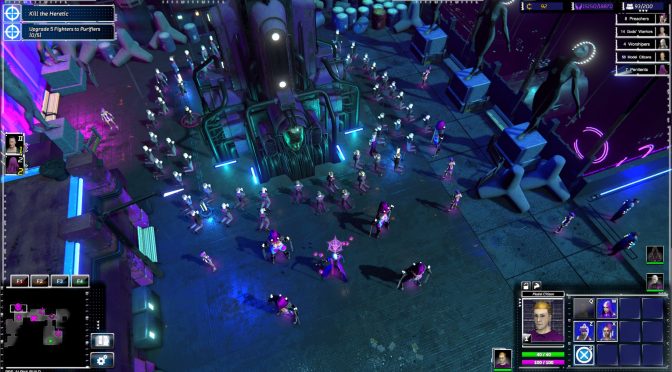 1C Company has announced that Ice Code Games’ new strategy game, Re-Legion, will release in Fall 2018. Re-Legion is a futuristic cyberpunk real-time strategy game that aims to combine specific gameplay features, a strong sci-fi storyline and vivid visuals into a solid foundation for both the single and multiplayer modes.

Re-Legion promises to give us a glimpse into a grim future (that might very well be our own!) while simultaneously touching sensitive subjects such as religion, fanaticism and clashes of ideologies – leading to merciless conflict when combined with people’s own persuasions and when driven by a hunger for a higher meaning. Although no absolution is offered to the players of Re-Legion, these themes give ground to an alternative system of economy and resource management.

Players no longer create or hire their units but convert them from neutral citizens. By expanding their cult and defining its dogmas, they can increase their power and their influence with a view to changing the old ways. Whether played in a single player campaign or in multiplayer mode, gamers will enjoy a great many options and possibilities when it comes to fighting their adversaries.