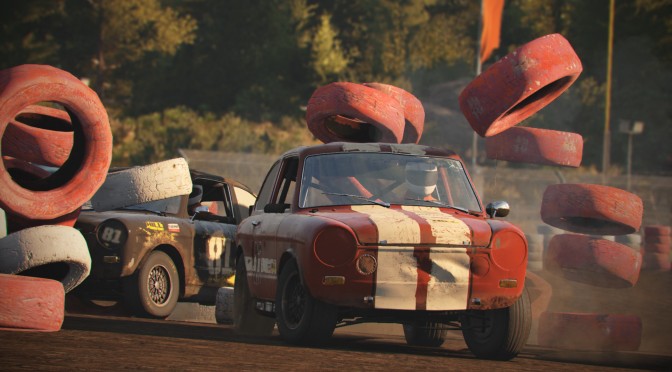 Bugbear Entertainment revealed today that its upcoming racer, Next Car Game, will be now officially named Wreckfest. In addition, Bugbear unveiled the game’s multiplayer modes that will be featured in it, as well as details for the latest build that is currently available to everyone.

Wreckfest will feature four different multiplayer game modes; Racing, Demolition Derby, and the new Deathmatch and Team Deathmatch. Moreover, the development team is currently pushing the limits to get the number of simultaneous players to 24 (MP now supports 18 players).

Furthermore, Bugbear shed some light on the game’s engine. Wreckfest is powered by Bugbear’s in-house engine ROMU; an engine that supplies the physics and detailed damage modeling to ensure that the crashes both look and feel glorious.

“The improved suspension physics we’ve been working on for the past month give collisions that extra mile of oomph – but we’re not satisfied yet. This is a good beginning, but it’s by no means all she wrote.”

Here are the key features of the latest build:

– New oval track ‘Speedway’ added
– New car ‘European coupe’ added
– The Field of Vision can now be altered, letting you find the combination of visibility and sense of speed you enjoy the most. (Check this video to see how FoV affects your sense of surroundings and speed.)
– Reversing now turns the camera so you can see where you’re backing to, which is especially useful in derby matches, where reversing into someone is an effective way to deal some damage without crippling your own car in the process.
– Car upgrades now work on online modes as well
– You can specifically search for servers where your Steam friends are playing