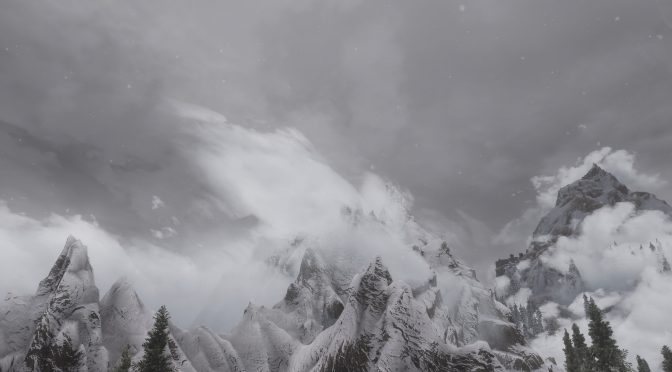 Modder ‘winedave’ has released a brand new HD Texture Pack for The Elder Scrolls V: Skyrim Special Edition. This pack, called Dave’s UFHD Mountains, is 1.8GB in size and adds 8K textures for most of the mountains.

Unfortunately, the modder has not revealed any additional details about this pack. As such, we can assume that the pack overhauls all of the mountain textures. Not only that, but it also includes new moss rocks, as well as matching landscape textures.

I don’t believe we’ve seen a lot of 8K textures for Skyrim, so I strongly giving it a go. To be honest, I’d love to see more 8K textures for other objects and characters, or at least more photogrammetry texture packs.

Last year, modder ‘jd941’ released the first photogrammetry mod for Skyrim. However, this mod is no longer available for download. On the other hand, the second photogrammetry mod we shared in February 2019 is still available. That pack featured 4K/2K high quality photogrammetry textures for landscapes, so I suggest also downloading it.

In order to showcase the new 8K mountain textures, winedave released the following screenshots. As such, and if you don’t want to download a pack that is almost 2GB, we suggest viewing them.