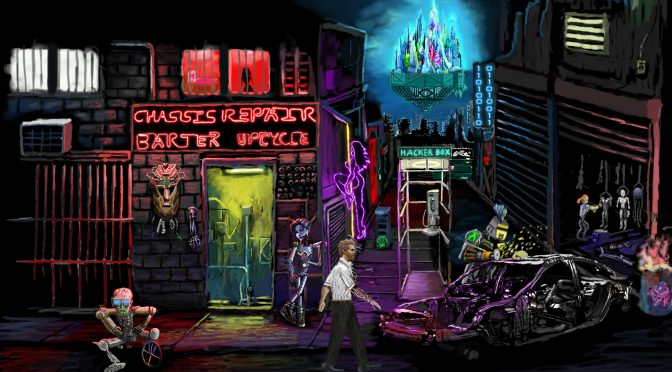 Hawaiian developer, Christian Miller, revealed his new point-and-click game, Neofeud. Neofeud is described as a dystopian cyberpunk point-and-click adventure game in the vein of Blade Runner, but with an overlay of Game of Thrones-like political intrigue, and hand-painted, stylized visuals.

The art, stories and gameplay of Neofeud are said to be a reflection of Christian’s experiences as a STEM teacher for the underserved youth of Honolulu’s inner city.

“Teaching robotics, programming, and sustainability is an often difficult, stressful, and even Kafka-esque endeavor – being in one of the richest, most beautiful places on Earth, yet dealing with families with working parents, who are living out of a van, or sleeping on the street. It is hard trying to keep the kids out of gangs, off of drugs, and on a path towards better opportunities, such as the ones I had growing up in a slum area of paradise while going to an upscale private school.”

The game is currently planned for a September 19th release on Steam, and will be priced at $14.99.