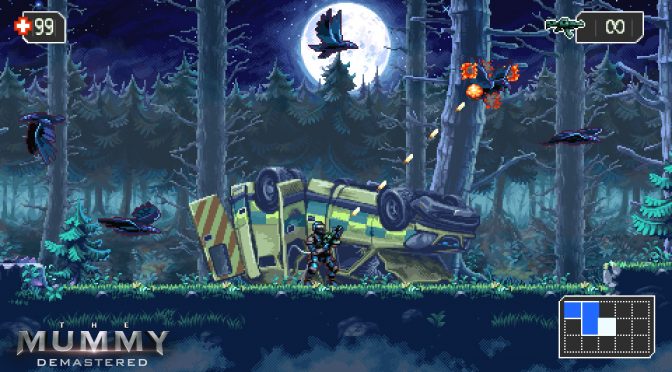 WayForward has announced that its 16-bit 2D action platformer, The Mummy Demastered, is now available on Steam. In order to celebrate this announcement, WayForward released the game’s launch trailer, and you can watch it below.

The Mummy Demastered is an eerie homage to the golden era of gaming. The game is a shoot-’em-up action meets exploration-based adventuring, featuring retro graphics and an atmospheric chiptune soundtrack.

In The Mummy Demastered, players will fight for survival against swarms of horrifying enemies and bosses. Players will obliterate monsters with an arsenal of weapons including grenades, a flamethrower and more. Furthermore, the game will feature 50 hidden relics.

Players will take the role of an elite agent in the monster-hunting Prodigium organization. Players will have to defend mankind against the supernatural hordes of Princess Ahmanet. In order to achieve that, players will have at their disposal a variety of weapons, upgrades, and mysterious artifacts!