MSI recently held an insider livestream, in which the company gave us some insights on the “binning” quality and overclockability of the three Comet Lake-S processors (the Core i5-10600K/KF, i7-10700K/KF, and the i9-10900K/KF) which they received from INTEL.

Tech enthusiasts “Eric Van Beurden” and “Michiel Berkhout” spoke about the assessment of the Core i5-10600K/KF, i7-10700K/KF, and i9-10900K/KF chips it received,  highlighting the “binning” quality of these processors.

“Binning” is a term vendors use for categorizing components, including GPUs, CPUs or RAM kits, by quality and performance. While components are designed to achieve a certain performance level, sometimes the “final product” fails to meet those standards, due to the “complexities” associated with manufacturing PC components. After manufacturing, vendors conduct testing and bin the component based on its performance results.

Vendors may bin-out high-performance components by “disabling” some of their capabilities and marketing them as lower performance to meet their own supply/demand needs. For instance, if a high-end CPU isn’t selling much, the supply would be high. A vendor could disable compute units in some of these high-end CPUs so that they’ll fit into the more highly demanded mainstream market and have a better chance of selling.

According to the data given by MSI, it looks like only 2% (Level A) of the Core i5-10600K(F) processors clock higher than Intel’s outlined specifications, and  52% ( Level B)  operate within the specs.  On the other hand 31% of the tested samples were considered as low quality (Level C). The Core i7 SKU also offers similar quality levels as told by MSI.

Core i9-10900(K/F)’s quality appears to be much better when it comes to overclocking/OC. Up to 27% of the samples tested were offering a much better “overclocking” headroom than the i5 and i7 SKU counterparts. MSI has actually divided these chips it received under three different categories.

First is Level A which contains  the chips that overclock higher than Intel’s provided specifications (meaning the overclocking headroom is much higher than expected).  Level B consists of SKUs that can overclock within the Intel’s specifications. Level C, on the other hand, consists of SKUs that have their overclocking headroom way below Intel’s specifications. We are not taking about STOCK frequencies here though.  According to the testing, it was found that only 2% of the i5-10600K/KF chips went above Intel specifications, qualifying for Level A.  The i7-10700K/KF figure was only 5%. On the other hand the i9-10900K/KF CHIP accounted for 27%.

MSI shared a second graph in which they talk about the voltage and the average “package power” correlation among these three bins. These are the power requirements.  The Curve  describes the voltages for the Core series (Blue: i5-10600, Red: i7-10700 and Green: i9-10900), whereas the bars illustrate the package power (in Watts).

MSI also shared another slide showcasing the temperature of the VRM in both stock and overclocked frequencies. This was measured in a Cinebench R20 test with the Core i9-10900K. The package power on the other hand varies between 203W for the stock SKU under load, and  347W if the CORE multiplier is set to 51. 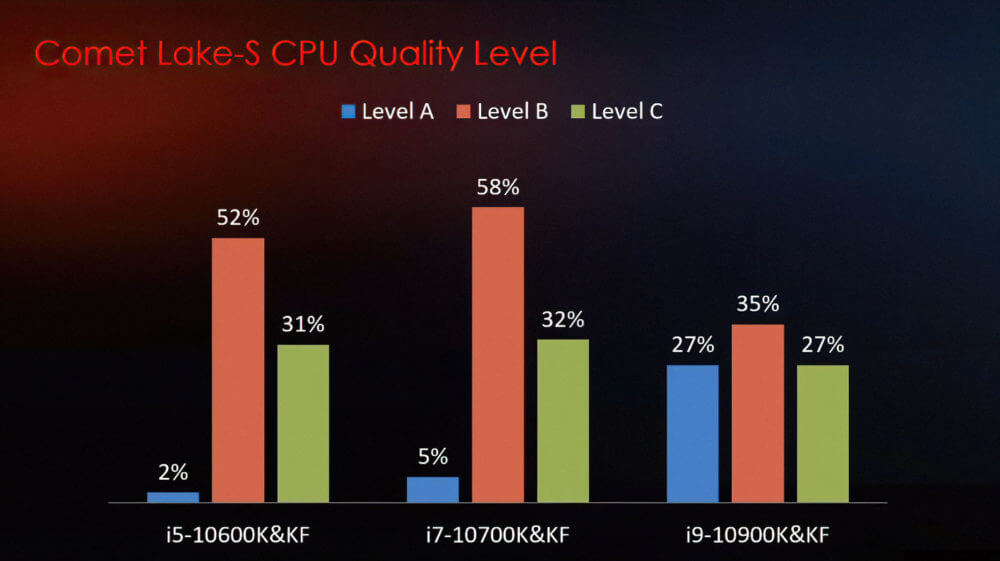