Although SEGA removed the PC tag from their online PDF presentation report about their 2011 profits and 2012 projections, there is more evidence that Sonic Generations is indeed coming to the PC. DrKirby of NeoGAF revealed a screenshot, in which we can see that a PC Beta is listed in Steam’s database.

As we can see, Sonic Generations is planned for a PC release. The following screenshot is from Steam’s “ClientRegistry.blob” file, a file that contains basic product data for everything currently in Steam’s database. 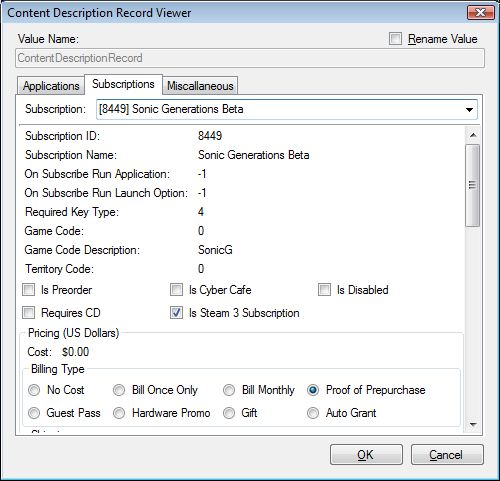 This screenshot reveals that a beta phase is planned for the PC version of Sonic Generations. The ‘Is Steam 3 Subscription’ and ‘Proof of Prepurchase’ checkboxes indicate that most gamers aren’t allowed access, unless they have a special download code. This clearly means that the ‘product’ is either addressed to the press or to Sega’s own internal development teams.

The company didn’t comment on this new evidence and we don’t know why SEGA hasn’t revealed anything officially yet about Sonic Generations PC or why they’d removed the 3DS tag from their presentation report.