Last week there were several reports that the Epic Games Launcher client was causing a spike in temperature on some AMD Ryzen and Intel CPUs. There was a bug in the Epic games launcher gaming client which was causing some CPUs to run hotter even without any game running, as reported by multiple users on Reddit, and also tested and verified by Hot Hardware as well.

The Epic Games Launcher was reported to be continuously running some sort of relatively demanding process, and using some CPU resources even when it was running in the background, when the spike in CPU temp occurred. Thankfully, Epic Games has now addressed this issue via a new 11.0.2 Hotfix update for the client.

Sergiy Galyonkin, who is a director of publishing strategy at Epic Games, recently confirmed this on Twitter. The company’s development team has identified the issue, and a hotfix has been released.

Though, Epic Games’ Sergiy Galyonkin has stated that “it’s not a full solution”. Hopefully things should improve, but further patches may be required to fully address this high CPU usage bug. The EGL/EPIC games Launcher patch notes should also be updated to reflect this change. 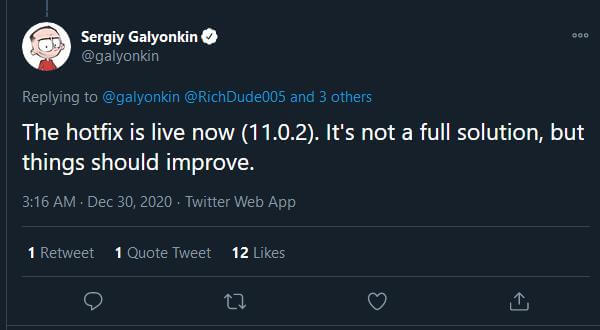 The Epic Games Store’s December 29th patch will be applied once you restart your client. As once again reported by Hot Hardware in a new article:

“This issue has been floating around since at least 2015 according to reddit user /r/RadonPL. Hopefully, the upcoming fix will put a lid on the longstanding problems, and we will find out more soon. It’s not clear, however, if this path will also address the extraneous traffic issue that seems to be more prominent on the Epic Games Launcher than on other apps, like Steam. “

To recap the issue, it was also reported earlier that the Epic Games Launcher/EGL was sending 14x more data as Steam and NVIDIA Geforce Experience, while working in the background during the same timeframe.

It was discovered that the “EpicWebHelper” was sending some data to the following URL/server, though it remains to be seen whether this data collection behavior was indeed the cause of the high CPU usage/temp issue:

If you are still experiencing a similar high CPU usage and temp behavior with the EGL app, even after applying this new Hotfix, then kindly leave your findings in the comment section below.