Rocket Lake (RKL) is a planned microarchitecture designed by Intel as a direct successor to the Comet Lake-S series of desktop CPUs and high-performance mobile devices. Intel has been using the same iteration of the 14nm FinFET process node with the Skylake Architecture for many years. Comet Lake-S was also fabbed on this aging process node, which has held Intel back in terms of IPC uplift and efficiency gains over AMD’s Ryzen lineup.

Rocket Lake-S will be housed on 500-series motherboards. Although the Rocket Lake-S lineup will be the last to feature the LGA1200 socket/ Z490 chipset, Intel is planning a full range of chipsets, including workstation W580, high-end gaming Z590, H570 and budget-oriented B560 and H510 series. According to one recent roadmap, the gaming 500 mobo series is due to launch in late March, next year 2021.

Rocket Lake CPU lineup is currently planned for release in the first quarter of 2021, as confirmed by Intel on its official blog recently.

John Bonini (VP and GM of Client Computing Group Desktop, Workstation, and Gaming at Intel) also confirmed that the 11th Gen Core series processors codenamed Rocket Lake will be Intel’s first lineup to support the PCI-Express gen 4.0 interface, a feature which has been seemingly missing in Intel’s client Desktop CPU platform for quite some time.

Rocket lake-S CPUs are going to support the PCIe 4.0 standard and interface. Now one Taiwanese tech publication ITCooker has tested a Rocket Lake CPU sample on the Z490 Motherboard to check the platform’s PCIe-4.0 capabilities. The Rocket Lake S sample was tested with a PCIe 4.0 NVME SSD drive and an RX 5700 XT GPU.

For context, Intel’s 10th generation Comet Lake-S series of processors do not fully support this new PCIe 4.0 standard. But since hardware-level support for PCIe 4.0 is already built-in these Z490 boards, only Rocket Lake CPUs are going to offer full compatibility of the PCIe Gen 4.0 standard.

Several Motherboard vendors have also been advertising that their current Z490 boards are PCI-e 4.0-ready. PCIe 4.0 has been an AMD-only feature within the consumer market till now, but things might change with the launch of Rocket lake-S CPU lineup.

The benchmark was done using Seagate’s FireCuda 520 PCIE 4.0 drive, and AMD’s RX 5700 XT GPU. Both of these were recognized as proper PCIe 4.0-capable devices. CrystalDiskMark 8 software reported a read speed of 5 GB/s and a write speed of 4.2 GB/s (sequential), which is only possible on a PCIe 4.0 capable bus. And GPU-Z screen reports PCIe x16 4.0@ x16 4.0 active bus interface, when the AMD GPU was stress tested with Furmark software.

Both the SSD and GPU were properly using the PCIe Gen 4.0 standard on the Z490 platform. To quote ITCooker, via Google translation: 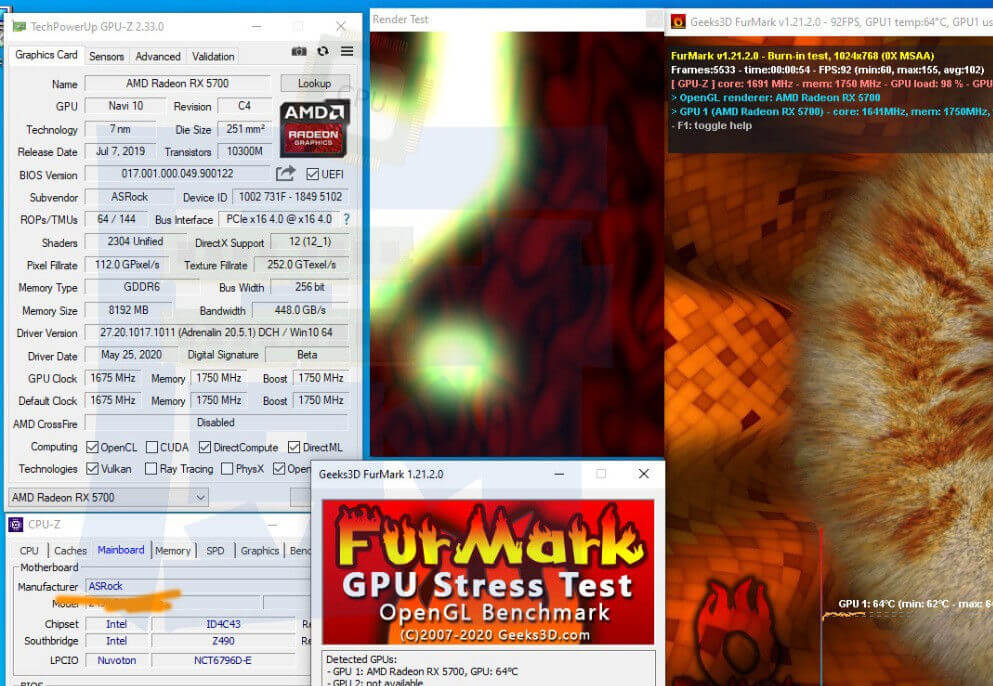 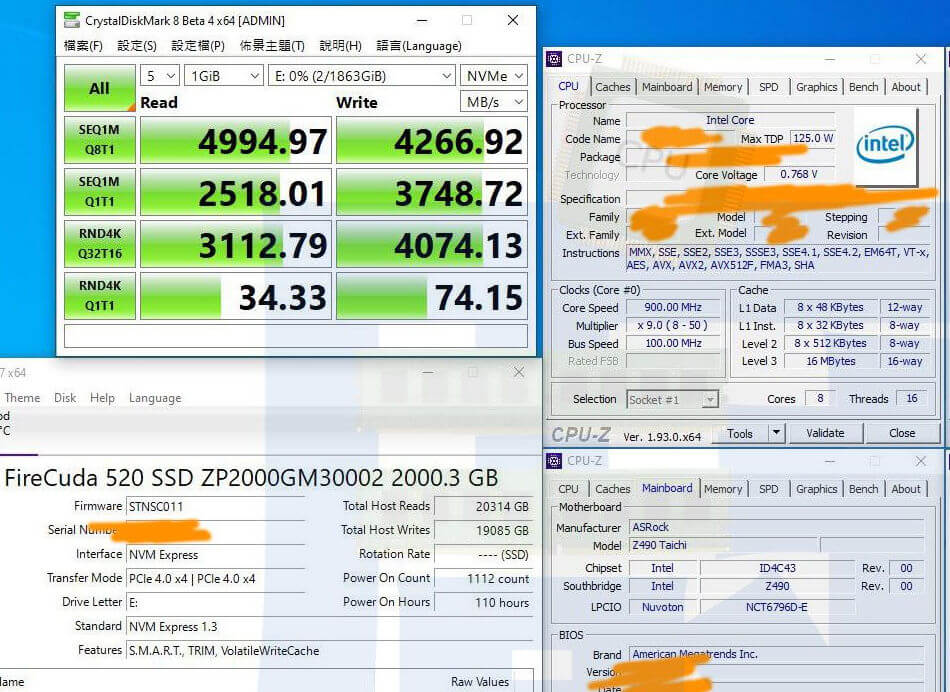 According to previous rumors Rocket Lake will deliver desktop users up to eight cores and sixteen threads on the high-end, which means two cores and four threads less than the current Comet Lake processor lineup. But the reduction in core count could also mean that Intel plans to rely on increased single-threaded performance, thus boosting overall system performance through single-threaded gains.

But in the case of Rocket Lake the uncore die is more advanced that the CPU die. The CPU die is fabbed on a 14 nm node on Rocket Lake-S, which contains the Willow Cove CPU cores in this die, and a system agent, which are connected together by a Ring-bus interconnect. And the system agent connects to the 10nm uncore GPU die via EMIB.

The 10 nm GPU uncore die on the other hand features the Gen12 XE iGPU with up to 96 EUs, a dual-channel DDR4 memory controller, a PCI-Express 4.0 controller, as well as display and media engines. Rocket Lake-S MCM may provide a total of 20 or even 24 PCI-Express lanes, out of which 16 are assigned as PEG (PCI-Express Graphics), and 8 lanes are assigned as chipset bus. You can see the Block diagram as posted below.