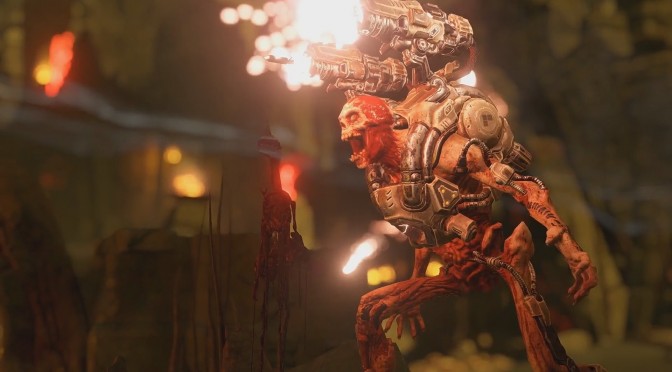 A couple of weeks ago, we had the pleasure of interviewing id Software’s Tiago Sousa and Axel Gneiting. And as you may have guessed, we asked the team about the advantages of OpenGL over DX11 (and vise versa) and why it chose Vulkan over DX12.

As Axel told us, OpenGL has a bigger feature set through extensions and it is less restrictive in terms of certain GPU operations, something that was ideal for what id Software was going for.

“Overall we had very little issues developing DOOM with OpenGL. DirectX 11 might have an advantage when it comes to optimizations on driver side, as more effort was put into that over the years by the IVHs compared to OpenGL. Also admittedly, there is a broader range of tools that work with DirectX than OpenGL at this point in time. On the other hand, OpenGL has a bigger feature set through extensions and it is less restrictive in terms of certain GPU operations.”

As for DX12 and Vulkan, Alex had this to say:

“DirectX 12 and Vulkan are conceptually very similar and both clearly inherited a lot from AMD’s Mantle API efforts. The low level nature of those APIs moves a lot of the optimization responsibility from the driver to the application developer, so we don’t expect big differences in speed between the two APIs in the future. On the tools side there is very good Vulkan support in RenderDoc now, which covers most of our debugging needs. We choose Vulkan, because it allows us to support Windows 7 and 8, which still have significant market share and would be excluded with DirectX 12. On top of that Vulkan has an extension mechanism that allows us to work very closely with AMD, NVIDIA and Intel to do very specific optimizations for each hardware.”

Our full tech interview will go live this weekend, so stay tuned for more!