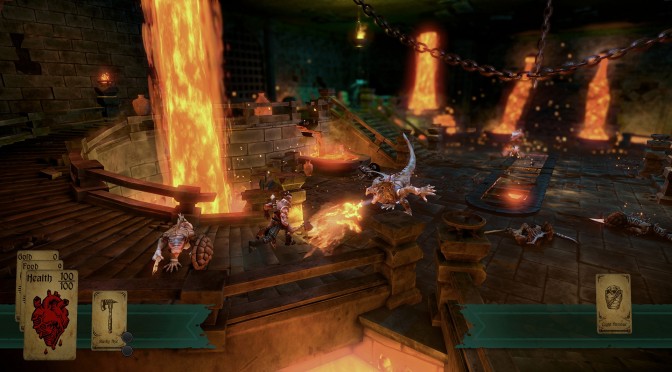 Defiant Development has announced that its new title that blends RPG and rogue-like features with elements of board and collectible card games is now available. Hand of Fate is priced at $19.99 and in order to celebrate this announcement, Defiant Development released the game’s launch trailer.

Set in a cabin on the edge of the world, Hand of Fate thrusts players into a game of life and death with a dealer intent on their demise.

“Gamers start by building a deck of equipment, enemies, encounters, loot and surprises – then play it. Some cards present players with game-changing choices, reminiscent of a tabletop RPG. Other cards require gamers to fight for their lives against terrifying mythical creatures. When this occurs the title switches to third-person perspective and has an action-adventure combat system.”

“Hand of Fate builds upon the lessons we learned developing other popular games and pushes the envelope by applying table top and collectible card game elements. We combined a captivating fantasy environment with furious-fast paced combat and engrossing story-telling to create an experience that will keep gamers busy for months to come.”

Here are the game’s features:

·Breathtaking fantasy world where human inhabitants struggle for survival
· 465 cards – each one a different decision, battle, piece of equipment, enemy or boss battle
· More than 1000 lines of dialogue – never hear the same sentence twice in one play session
· 13 epic boss battles and 24 kinds of enemies
· More than 100 game changing items including: 25 weapons and 13 sets of armor
· Two game modes:
– Story – Defeat the dealer and his treacherous minions
– Endless – Cycle through a never ending deck of cards and compete worldwide for the top spot on the leaderboard