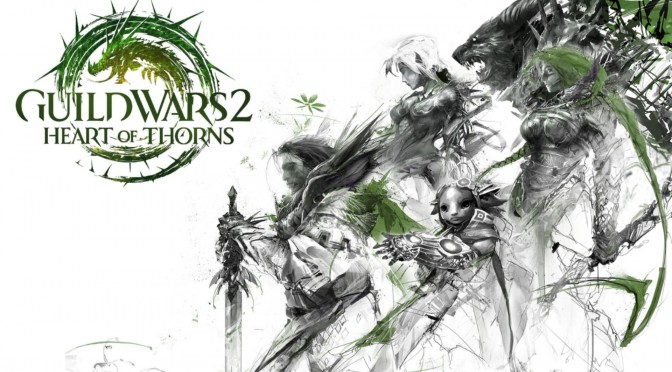 ArenaNet today set the stage for the future of Guild Wars 2 and its upcoming expansion, Guild Wars 2: Heart of Thorns, at a fan and press conference at PAX Prime. ArenaNet co-founder and president Mike O’Brien and Guild Wars 2 game director Colin Johanson presented to hundreds of fans at a packed theatre in Seattle and many more tuning into the livestream from around the world. O’Brien revealed details about how the core version of Guild Wars 2 is now available to play for free starting today.

As the press release reads, Johanson delivered news aimed at the game’s current player base, highlighting how Heart of Thorns will introduce raids as an all-new form of challenging group content for skilled players and a key part of the studio’s strategy for content updates after the expansion launches.

ArenaNet kicked off the presentation with a video trailer confirming that Guild Wars 2: Heart of Thorns will ship in North America and Europe on October 23rd of this year.

By making the core Guild Wars 2 game free, ArenaNet is lifting the final barrier for MMO fans everywhere to play one of the most popular games in the genre and join a player community widely recognised as one of the best in online games. The move to free reinforces the studio’s strategy with its MMO business model. Like the company’s previous games, Guild Wars 2 launched as a buy-to-play game without a subscription. It has since delivered more than 40 major content updates to players free of charge. While the core Guild Wars 2 is now available to play for free, Heart of Thorns will launch as a buy-to-play experience without subscription fees.

“We believe the buy to play, subscription-free model for MMOs is good for players, and it’s good for developers. It gets a little tricky when a buy-to-play MMO introduces an expansion pack, leaving new players guessing about what they need to buy in order to start playing with their friends. As we get ready to release our first expansion for Guild Wars 2, we want to ensure that we keep a simple business model where new players can play the core game for free, while all players need only purchase one thing – Heart of Thorns – to get access to all of our new and future content.”

Heart of Thorns will follow a model, where major post-release content such as raids and eventually additional Living World episodes will be available free of charge to those who purchase the expansion.

The strategy behind making the core game free is to engage players in Guild Wars 2 to the point that they will want to continue experiencing this ever-growing game universe by upgrading to Heart of Thorns.

ArenaNet is currently offering a pre-purchase program for the expansion. Players who pre-purchase Heart of Thorns will get benefits such as unique virtual items and access to Beta Weekend Events between now and launch. New players who have begun playing the core game for free will have free account restrictions lifted once they purchase the expansion.

“In making Guild Wars 2 free, we’re not switching business models to a traditional free-to-play game, and we’re not aggressively monetising free players through microtransactions. We’re making the base game free because we’re confident that anyone who loves Guild Wars 2 will consider buying Heart of Thorns, continuing their experience into the expansion and beyond with Living World and our newly announced raids.”

The expansion is introducing a variety of endgame content including entirely new and unique systems for max level players to continue progressing in the game. These include a new approach to leveling up called Masteries, which replace traditional number-based progression once players reach level 80 with a system of contextual and skill-based abilities to pursue and earn. There is an entirely new profession, the revenant, for players to master, along with new elite specialisations that bring additional skills, weapons and abilities to every existing profession in the game. There are also group progression features including guild halls, where players in guilds can claim, explore, and eventually architect and customise giant maps within the game world, and PvP Leagues, where teams competing in PvP are given a roadmap to develop their skills while earning status and rewards.

Raids in Heart of Thorns are a big piece of the puzzle for skilled players interested in taking on the ultimate challenges in group play. They will be 10-player instanced content where players must use newly acquired abilities to reach and overcome ever-increasing challenges, and eventually epic boss encounters. ArenaNet is releasing the first raid in three parts, or wings, shortly after the expansion releases. By activating raids soon after launch, players will have time to earn new abilities in the Mastery system that will be required to take on the challenges that await them.

“Once we activate the first raid in Guild Wars 2: Heart of Thorns, players will quickly discover they’re not about waiting to have fun or endless gear grind – there are no attunements to complete before you raid in our game, and our raids won’t become irrelevant or even drastically easier because of a new tier of gear or a level cap raise. There will be no wasteland of forgettable raids left behind as we continue to expand the system. Once players complete a mission and beat the final boss in a Heart of Thorns raid, it will be a meaningful event that will linger for them, their guild, their friends and any player who learns that they’ve beat it.”