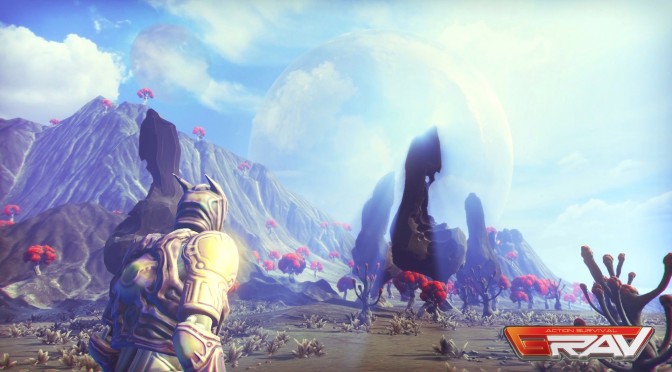 BitMonster, the veteran 6 person development team behind the award winning GunnerZ and Lili titles, announced today that GRAV, their latest PC creation that took less than 46 hours to be Green Lit by the Steam Community, is now available on Steam Early Access.

GRAV is an action adventure sandbox survival experience where players explore a multitude of procedurally built planets, build and defend outposts, craft abilities, fight and hunt strange creatures and try to survive while playing either with or against other players in the alien hostile environments.

GRAV is a Steam Early Access title and the developers at BitMonster plan to work very closely with the community while we evolve and move GRAV forward.

Players can explore massive environments above ground or journey deep into one of the hundreds of unique procedurally generated dungeons each with their own collection of sorted bounties. While playing alone you explore and mine areas for elements that will then help you craft and build your own personal collection of equipment, weapons, machinery and structures that helps you survive against not only the elements of the alien world but also against other players that may want to destroy or steal your possessions.

Here are the key features of GRAV:

Endless Worlds – The planets of GRAV are procedurally generated from composite parts. This allows for a near infinite combination of biomes, alien sites, and dungeons.
Gorgeous Visuals – Genre re-defining visuals allow you to experience fear, excitement, and trepidation in a way never seen before.
Frenzied Combat – Compared to the zen-like calm of harvesting resources, combat is a wild ride which you can only hope to survive. Both Melee and Shooting are the tools of death in GRAV.
Player vs Player – Create alliances with other players, viciously kill them and take their belongings, or run from it all! It’s up to you how you interact with your fellow players.
Play With Friends – GRAV is all about enjoying the experience with your friends. GRAV is client-server based so put up a server or join an official one!
Powerful Base Construction – Supporting a modular contextual room based construction system allows for building bases quickly. GRAV’s building system can be used for creating an entire city, a quick base to fight off enemy players, or building an outpost deep in a dungeon to defend against the aggressive hordes.
Extensive Crafting – Anything you can harvest or kill has a chance to drop Crafting Materials. Building everything from the armor you wear, weapons you kill with, to the actual bases themselves comes from crafting.
Dynamic Environmental Events – GRAV employs a procedural system to create world events for players. A night could consist of blossoming night flowers, meteors raining down from the heavens, or even a horde of very angry alien wildlife trying to kill you and anything you have ever made.
Procedurally Generated Dungeons – The planets of GRAV are full of dungeons that are created specifically for that planet. Full of rare resources, dangerous foes, and environmental obstacles that provide a high-risk high-reward play area.
Hostile Environments – Alien planets have a combination of semi safe areas and just plain you-are-probably-going to die locations! The planets of GRAV are places where you must do whatever it takes to survive.