Together with the official launch, Gala Networks Europe opens SEVENCORE’s special PVP channel, in which players can fight each other and have the chance to win precious, unique items and gain higher XP.

The new “buddy boost” system is also being introduced today. This additional bonus system gives all active players who play more than one character XP boosts for all their characters.

To celebrate the launch of SEVENCORE, Gala Networks Europe welcomes players on all channels with a special XP event: On September 22nd and 23rd, players will get 50 % more XP – hint: using potions can lead to even higher XP gains.

Still on are the “Invasion of the Obsidian troops” and “Race for Glory” events: Until September 28th, players can help to guard and protect the beautiful Obsidians – and will be rewarded with precious treasures for their brave service and support.

During the “Race for Glory” event, players get the chance to win a brand new laptop computer as well as up to 10,000 gPotato being credited to their account: The mission is to reach Level 80 by November 15th, 2012. More details on the race for glory and the prizes awarded can be found in the official SEVENCORE forums.

SEVENCORE, the fusion fantasy MMORPG developed by the Korean studio Noria, allows players to explore a vibrant world inhabited by three forces in the midst of a global conflict that will evolve as time goes on. The world is being torn apart by a war between the Grand Cross Alliance, it’s rival Amaad, and the shady Sevencore organisation that vies to dominate the world.

The game promises to offer an open world filled with adventure, as players mix magic and technology to discover the secrets of a powerful energy source known as Soulite. SEVENCORE features in-depth character customisation and allows players to play as three indigenous races: Shajad, Bruter and Nuuk. It also features a wide range of mechanical and organic mounts for players to discover, which can used in combat and for travel across the ground and through the sky, and a character level cap of 80. 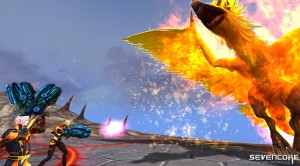 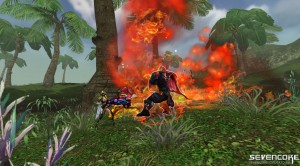