Vostok Games has released the first screenshots for their free-to-play MMOFPS that is inspired by the STALKER series, Survarium. Survarium will feature RPG and survival elements, as well as a post-apocalyptic atmosphere that will influence the gameplay in many different ways, mutants, underground levels and bullet ballistics. Survarium will be a story driven MMOFPS and will not feature a seamless big world. The company has also released the second developer diary that can be viewed below. Survarium is currently slated for a 2013 release, exclusively on the PC. 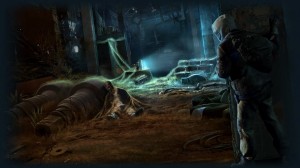