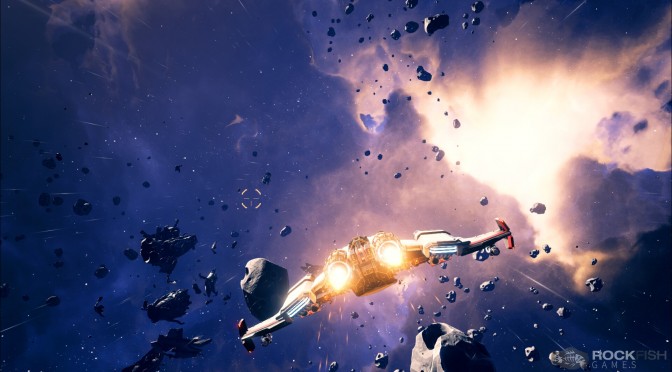 ROCKFISH Games has announced the release of the second major content update for EVERSPACE on Steam and GOG. In addition, ROCKFISH announced that the previously released first major content update will hit Xbox One and the Windows 10 Store later this week and will continue to support Xbox Play Anywhere including cross-saves compatibility as well as buy once, play anywhere.

The team also continues to work closely with ID@Xbox on bringing the most recent content update to Xbox One and the Windows 10 Store, soon.

The first update featured the all-new Colonial Scout which players can unlock as an additional player ship, as well as an “Easy” difficulty mode.

The most recent update features the Colonial Gunship as the 3rd player ship.

As the press release reads, the Colonial Gunship is a real flying fortress with a massive hull and lots of firepower.

“It comes equipped with a fusion blaster and flak cannon as primary weapons as well as heavy missiles, cluster mines, scanning probes, combat drones, and an automated Gatling turret which can be upgraded. The fact that the Gunship does not have a shield generator is much slower and less agile will keep combat interesting, especially when players find themselves outnumbered. It will surely come in handy that the nano bots cap for the Gunship has been raised.”

To increase the differences between the three player ships and to add even more replay value, perks have been split into pilot and ship-related perks, with the latter being tweaked quite a bit while still retaining the overall long-term progression of the pilot-related perks. To differentiate the playstyle of the player ships even further, ship-exclusive perks like “armor” for the Gunship and “sensor range” for the Scout have been introduced as well.

Furthermore, two new pilot perks – “Trading” and “Diplomacy” have been added. While “Trading” grants benefits at shops and service stations, “Diplomacy” increases the pilot’s standing with the G&B faction. With the latest update, G&B units will occasionally report player attacks, turning them hostile in the current and the next location. With the Diplomacy perk players can make them a little more forgiving and every now and then they might even jump in to the rescue when being outnumbered by outlaws.

Players can also look forward to new natural hazards, a new planet type, more structures, additional points of interest, a new special type of enemy and, last but not least, the first chunk of log book entries written by backers.