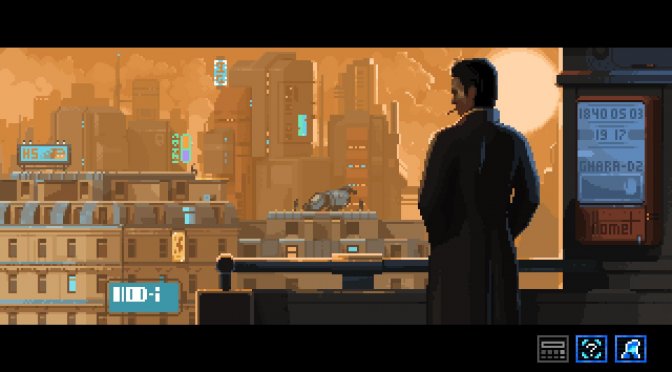 Assemble Entertainment and DigiTales Interactive have released a demo for their story-driven sci-fi noir adventure, Lacuna. Furthermore, the teams revealed that the full game will release on May 20th.

Lacuna promises to be a beautiful 2D pixel art sci-fi noir game that will challenge the player to utilize extensive dialogue options to make decisions with potentially serious consequences. In the game, players must use their moral compass to navigate an emotionally intense experience.

In Lacuna, you’ll step into the tattered loafers of long-time Central Department of Investigation (CDI) agent Neil Conrad. Conrad will investigate a grisly murder that will soon turn the world on its head. Attention to detail and an inquisitive mind will prove helpful as you put the scattered pieces of the case together until the truth reveals itself.

The story of Lacuna branches, and finally ends, based on your actions throughout the game.

Lacuna does away with the baggage of many over-used adventure game tropes such as the “point-and-click” mechanic, repeating dialogue options, counter-intuitive puzzles, pixel hunting, and interruptive story breaks. Instead, Lacuna utilizes normal WASD/controller controls and dynamic conversational choices. It will also have story-driven mysteries, optional interactables, and multiple unique endings.