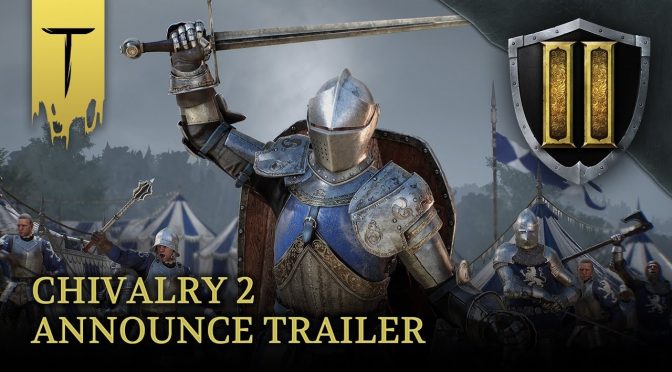 First announced at the PC Gaming Show E3 2019 press conference, Chivalry 2 is currently in development for PC and is targeting a 2020 release and will debut on the Epic Games Store and release on other PC platforms 12 months later.

Chivalry 2 is a multiplayer first-person slasher inspired by epic medieval movie battles where players will experience the thrill of combat in massive 64-player battlefields brought to life. Chivalry’s flagship Team Objective game mode brings narrative to multiplayer by having players battle across multiple stages in contextualized objectives, thrusting the player into the action of all their favorite medieval movie scenes.

Players will immerse themselves in the sounds and sights of battle as they are thrust into iconic moments of the era, from the heavy thunder of cavalry charges to forest ambushes, sprawling castle sieges, and good old looting and pillaging. Survive waves of fiery arrows raining down from above, slay multiple enemies with a single strike and ride to war on horseback to claim glory by your blade. Riveting sound and effects ensure every blow lands with the sickening thud of steel sinking into bone, making Chivalry 2 the ultimate aggression outlet and emotional release.

Players will also unleash their inner beast with weighty and satisfying combat utilizing a massive arsenal of brutal medieval weaponry. Based heavily on player feedback, Chivalry 2 introduces a revamped, faster, and more fluid combat system that also offers an expanded range of creative choices, allowing players to perfect their own strategy and playstyle. The ability to fight through the pain while wounded or bleeding out and roll back to your feet from the ground or fight on even when down a limb gives players the chance to become a hero or die a good death.

“With Chivalry 2 we are bringing the grit and emotions of an epic cinematic medieval battlefield to a completely new level. We have fixed the issues of the first game by redesigning our combat, animation and movement systems from the ground up and the result is a deeply satisfying and weighty physicality to every interaction. With an expanded combat moveset allowing for far greater player creativity, a re-imagining of our Team Objective game mode at scale and a focus on AAA level polish and visuals, Chivalry 2 is set to become the first true advancement in the genre.”

“The original Chivalry was an incredibly successful phenomenon that established the first-person medieval combat genre. We’re very honored to be able to team up with our good friends at Torn Banner Studios to bring Chivalry 2 to fans. When two of the most successful, customer focused independent studios in the world collaborate, great things are going to happen. Chivalry 2 is coming. The king of medieval combat games is back. Long live the king!”