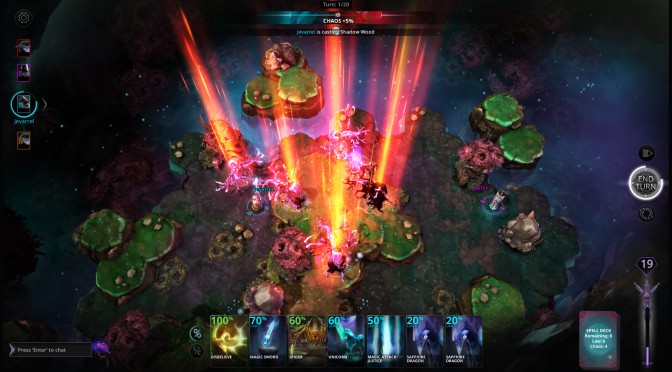 Julian Gollop, the designer of the original award-winning X-COM game, has released a gameplay trailer for his upcoming new strategy and tactical RPG title, Chaos Reborn. In Chaos Reborn, up to 4 players can challenge each other to magical duels in a variety of arenas using a spell deck of interesting spells and creatures.

Chaos Reborn will be released on Steam Early Access on December 9th 2014 for PC, Mac, and Linux.

According to its description, the final version will include an extensive single-player or co-op RPG element where players can explore the Realms of Chaos fighting Wizard Lords and Kings while collecting artefacts and spells along the way, and these realms will either be procedurally generated or designed by player Wizard Kings.

“Players will be able to trade items, join Orders (guilds) and ascend social ranks, perhaps to become one of the gods. We plan to add extensive offline modes are well, where you can set up battles with AI wizards, different arenas and rules sets.”

In its current state, players can play multi-player online battles with 2-4 wizards and a variety of arenas. There is also a 2 vs 2 co-op battle mode, and games can either be ‘live’ or ‘asynchronous’.

“With live games there is a turn timer of between 1-3 minutes for each player to take their turns. With asynchronous games each player has a ‘chess clock’ style timer which is measured in days. You can create private games or use the random match maker.”

Moreover, players will be able to level up their wizards as they gain experience and level up, thus unlocking new staffs and spells.