Back in December 2019, 2K Games officially confirmed that a new Bioshock game was under development. Cloud Chamber studio started to work on the next iteration of the globally acclaimed BioShock franchise. This new BioShock game will be in development for the next several years, and will target next-gen platforms.

Now, several new job listings suggest that the next BioShock game may take place in an open-world environment with emergent systems, and advanced AI. Cloud Chamber has listed a set of new job descriptions implying the new sequel is going to be an open world role-playing game.

An industry analyst, MauroNL, stumbled across a handful of job listings on Cloud Chamber’s Greenhouse Boards page. There are listings for modelers, designers, programmers, and QA testers. 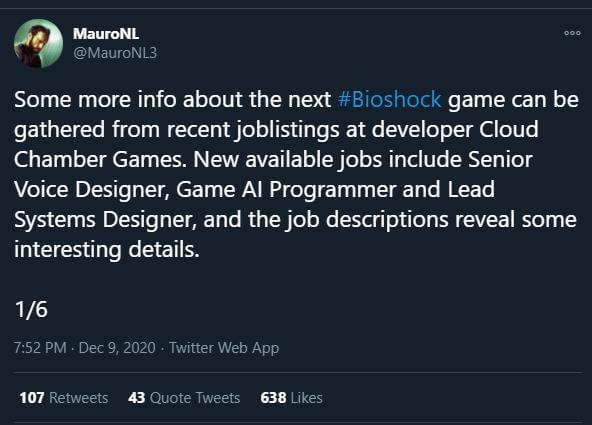 The Senior Voice Designer job ad for example reconfirms that the game developer is working on the next BioShock, before describing the game as an, ambitious, narratively-driven project full of character and personality. And the applicant is to help design the ‘dialogue systems’.

This could indicate the game has a dialogue system similar to Fallout for example.

The job posting for the Lead Systems Designer specifically notes the ideal candidate should have “an innate sense of how game systems connect and enhance one another in an emergent sandbox world.” This same listing later describes the roles as one responsible for: “Interactive world systems and non-AI systemic ecology.”

This could indicate a more open ended level design, similar to the hub based open world in Bioshock 1&2 rather than the more linear approach of Bioshock Infinite.

The developer is also trying to make strides in terms of AI. Game AI Programmer will take charge of tasks like fleshing out and finalizing the designs and implementations “for an urban crowd system and the systemic tribal ecology of a sometimes hostile AI.”

“We think we are trying some new and ambitious things with AI and have high ambitions for tying AI and storytelling together”.

The mention of a sandbox world suggests Cloud Chamber’s BioShock could be more in line with the franchise’s first two titles. Both BioShock and its 2010 sequel featured hub worlds, open spaces that players could more or less freely explore as the main story progressed. BioShock Infinite, on the other hand, offered a comparatively overall linear experience with limited scope.

As we already know by now this new BioShock game will be using Unreal Engine 4, and will feature a brand new world. BioShock 4 will be a narrative & systems-driven experience.

The game will also have an FPS combat paradigm that is accessible, satisfying, and allows for a high degree of player expression and experimentation within a highly reactive world. Not only that, but it will have various play-styles and encounters that can be resolved through player ingenuity.

Furthermore, the game will also have systemic, in-game, scripted cinematic sequences. Additionally, it will combine hand-crafted set-pieces and systemic interactions. The team aims to create a “living” world that offers players variety at every step of the game.

Though, BioShock 4 is in a really early stage of development. Therefore, some of the aforementioned features may or may not find their way into the final game.