So we can expect RDNA 2-based products before it becomes available on next-generation of consoles. Based on this confirmation and the fact that NAVI 2 card is going to be the first RDNA 2-based graphics silicon, seems to indicate that it might come ahead of the next-gen consoles, which are also based on the RDNA 2 architecture. Microsoft’s Xbox Series X and Sony’s PlayStation 5 are set for launch around this holiday period, so we can expect to see RDNA 2 GPUs before November 2020.

Assuming the next-gen PlayStation 5 and Xbox Series X consoles will leverage this very same “architecture” and are expected to launch this holiday season, so Big NAVI 2x must be releasing sooner than expected.

” There’s a lot of excitement for Navi 2, or what our fans have dubbed as the Big Navi” says Devinder Kumar, AMD’s CFO, at the recent Bank of America Securities Global Technology Conference. “This will be our first RDNA 2 based product.”

“Big Navi is a halo product,” Kumar added. “….enthusiasts love to buy the best, and we are certainly working on giving them the best. The RDNA 2 architecture goes through the entire stack….it will go from mainstream GPUs, all the way up to the enthusiasts, and then the architecture also goes into the game console products…as well as our integrated APU products. This allows us to leverage the larger ecosystem, accelerate the development of exciting features like ray tracing and more.”

He reiterated previous claims that AMD remains “on track to launch our next-generation Zen 3 CPUs and RDNA 2 GPUs in late 2020“.

But of course, NVIDIA is also rumored to release their next-gen GeForce RTX 3000 Ampere series of GPUs. So the competition is going to be very tough this coming September or October. RDNA 2 is coming to AMD’s “entire” product stack, including APUs (CPUs with integrated graphics).

All of this indicates that NAVI 2x is going to be big and powerful, also having support for new features like Mesh Shaders, Variable Rate Shading, “Hardware Accelerated Raytracing”, giving it a huge performance uplift and power efficiency than previous-gen RDNA 1 products.

According to Kumar: “There are some gaming features that are not needed in compute. And then there are some compute features that are not needed in gaming. So to gain efficiency and performance, we have decided to bifurcate the architecture. We see this area as a tremendous growth opportunity for both gaming and data center GPUs over the next five years, and the bifurcation of our roadmap will allow us to optimise for the workload and for the used cases that we see so that we can grow revenue in the GPU space.”

With gaming and compute graphics hardware requiring a different feature set and optimizations, AMD can cut unnecessary features from both AMD’s gaming graphics designs, and compute oriented products, if need be, since AMD has decided to “bifurcate” the architecture.

Both AMD and Nvidia plan to release their next-gen GPUs around the September 2020 timeframe, which will completely shake up the PC gaming market.  But can AMD really compete with the likes of Nvidia’s Titan or RTX 2080 Ti graphics cards ? Let me know your thoughts in the comment section below. 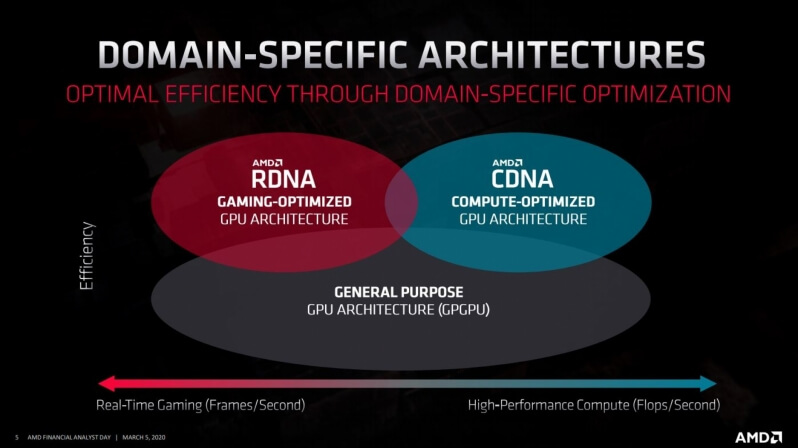