Okay, I’m pretty sure that both AMD and DICE have been misleading people on purpose these past weeks regarding Mantle. That, or they decided to ditch Mantle’s GCN-architecture requirement, something that seems highly unlikely. During AMD’s Developer Summit, Johan Andersson confirmed that Mantle is not tied to AMD’s GCN architecture, meaning that there isn’t such requirement.

Now this is a bit confusing. Back in September, Johan and AMD’s Chief Software Raja Koduri claimed that Mantle required a GPU with GCN architecture and that it would not be an open API. Now I don’t know if that was a bad choice of words, but today Johan said that although Mantle is built with GCN-architecture cards in mind, it does not require them.

This also means that other vendors will be able to support Mantle by not altering the architecture of their GPUs.

As Johan noted, most Mantle functionality can be supported on today’s modern GPUs, and DICE hopes that Mantle will become an active industry standard that will work with the GPUs of other vendors and not only AMD. 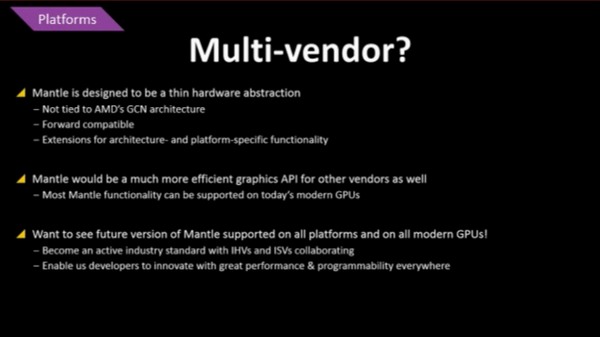 Disappointingly enough, Johan and AMD did not demonstrate Mantle. We don’t know whether they did that behind closed doors, but we were hoping to see something more from AMD and DICE.

At this point, we know exactly what we already knew a month back. There was nothing new and yes, we’ve already reported that Mantle will be supported by 15 games that will be powered by Frostbite 3.

DICE hopes to release a patch for Battlefield 4 in late December that will enable Mantle support.