As promised, AMD has unveiled its TressFX technology today and as we suspected, this new tech will be used in Crystal Dynamics’ upcoming Tomb Raider game. AMD’s TressFX is a hair technology and the company has released some before/after screenshots from Tomb Raider to show off what can be achieved with it.

“DirectCompute is additionally utilized to perform the real-time physics simulations for TressFX Hair. This physics system treats each strand of hair as a chain with dozens of links, permitting for forces like gravity, wind and movement of the head to move and curl Lara’s hair in a realistic fashion. Further, collision detection is performed to ensure that strands do not pass through one another, or other solid surfaces such as Lara’s head, clothing and body. Finally, hair styles are simulated by gradually pulling the strands back towards their original shape after they have moved in response to an external force. Graphics cards featuring the Graphics Core Next architecture, like select AMD Radeon HD 7000 Series, are particularly well-equipped to handle these types of tasks, with their combination of fast on-chip shared memory and massive processing throughput on the order of trillions of operations per second.”

Got the catch here? Graphics cards featuring Graphics Core Next architecture. . It appears that graphics cards with GCN will simply run this new hair tech better. TressFX is calculated by DirectCompute, therefore it should run fine on both Nvidia and AMD cards.

You can view some comparison shots of Tomb Raider (as well as one showcasing Lara’s new hair) below!

NeoGAF’s member ‘Lime’ has created the following comparisons between the CGI model of Lara Croft and the in-game character (with TressFX enabled). It’s really amazing how close to the CGI shots Lara Croft’s hair look in those in-game images, so kudos to AMD for doing something like that! 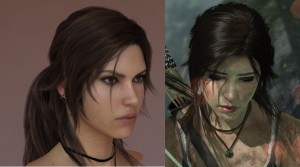 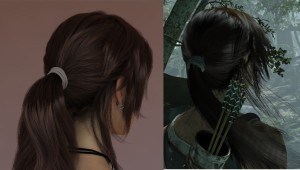 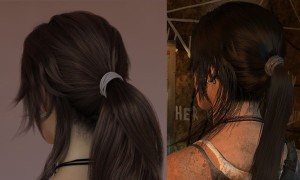